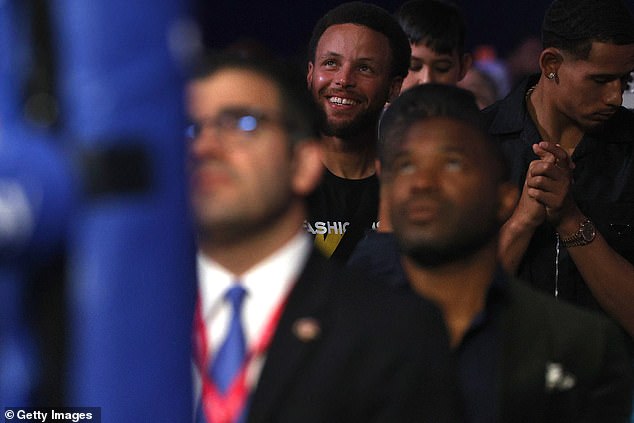 Steph Curry, Dave Chapelle and Michael B. Jordan among the stars in attendance for Alvarez-Golovkin as the Mexican retains his Super Middleweight title in a captivating trilogy fight in Las Vegas

By Patrick Djordjevic For Dailymail.Com

Polarizing actor and comedian Dave Chapelle was also in the arena, spotted with dark sunglasses to match his black leather jacket and dark green button-up.

UFC commentator, and podcast host, Joe Rogan, made the quick trip over from UFC 60 held at the UFC Apex facility which finished up shortly prior to the main event.

Known for his boxing skills on the silver screen in the Creed movie series, Michael B. Jordan watched on as two of boxing’s recent greats clashed.

Michael B. Jordan watches on prior to the beginning of Canelo Alvarez vs. Gennady Golovkin

Alvarez landed a significant blow to the jaw of his Kazakhstani opponent, Gennady Golovkin

Las Vegas Raiders owner Mark Davis was also seen in the crowd before his team takes on the Arizona Cardinals at nearby Allegiant Stadium on Sunday afternoon.

Davis’ Raiders lost their first game of the season to AFC West rivals, Los Angeles, and will be desperate to avoid a 0-2 start, much like the Cardinals.

Alvarez and Golovkin had locked horns on two prior occasions to Saturday night, the first coming in 2017 when Canelo escaped with a fortunate split-decision draw.

Entertainment and boxing personality, Mario Lopez, made his way to the desert on Saturday

Following the final bell, both fighters embraced in what was an embodiment of sportsmanship

A vast majority of onlookers had in fact called that fight in favor of Golovkin.

Their second encounter – which followed the first by taking place at the T-Mobile Arena – was equally controversial, with Canelo claiming a majority decision victory in a result that again felt harsh on the middleweight great.

Their third encounter — and what looks to be final fight — between Alvarez and Golovkin, with the Mexican now holding a 2-0-1 record over the Kazak, as the chapter closes.