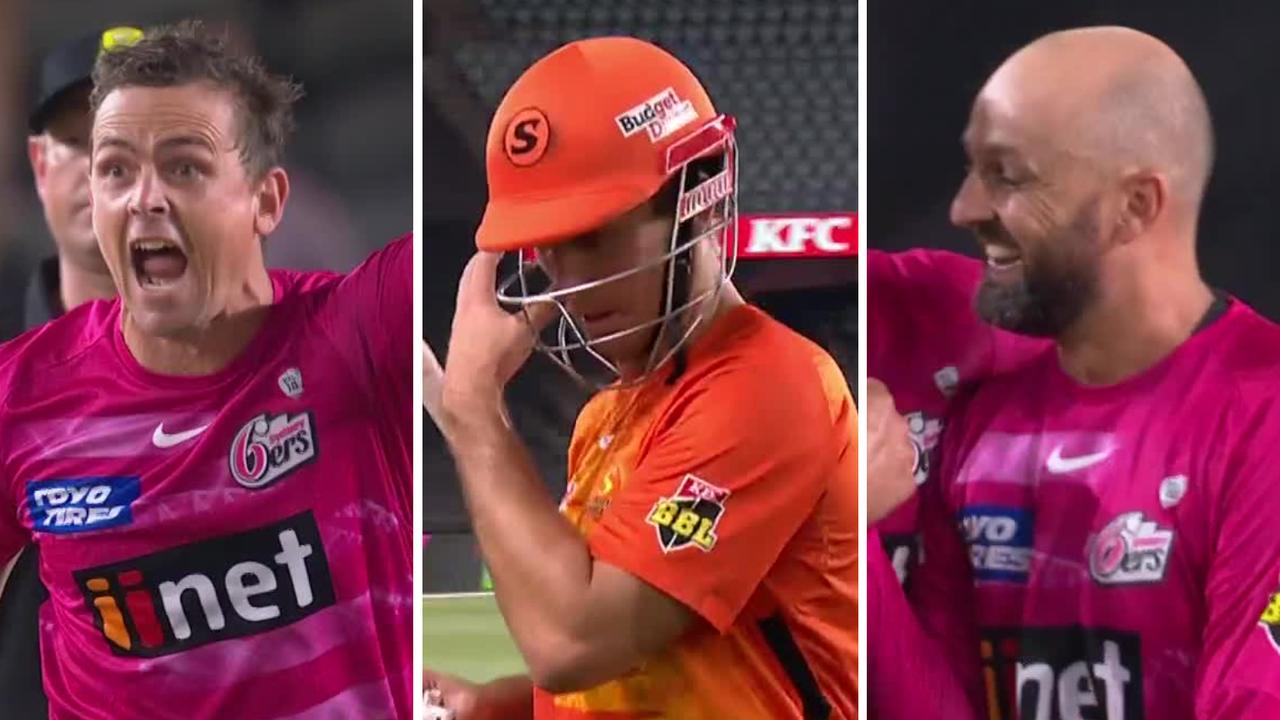 The Perth Scorchers are batting first in the BBL final against the Sydney Sixers who are aiming to claim a three-peat on Friday night.

Perth is 5-129 after 15.4 overs after Ashton Turner and Laurie Evans combined for a 104-run partnership.

The first wicket of the night came in the second over when Kurtis Patterson skied a Jackson Bird delivery close to the roof for wicketkeeper Jay Lenton to catch.

Josh Inglis was given a big lifeline on 12 when he spooned a simple catch to Sean Abbott, who shocked everyone by grassing the chance.

Adam Gilchrist said that the catch was “as easy as it gets”, while Mark Waugh called it an “absolute sitter” before questioning if the lights got in his eye.

Watch every KFC BBL Finals game Live & On-Demand on Kayo or catch up for FREE with minis on Kayo Freebies. Join Kayo Now >

It didn’t prove to be a costly mistake, however, as he was stumped for 13 with the first ball Steve O’Keefe bowled.

Nathan Lyon also took a wicket with his very first ball with Mitch Marsh failing to get hold of his slog which was caught in the deep.

Lyon took two wickets in the over when Colin Munro also threw his wicket away for just one run, making it a Scorchers loss of 4-18.

“They just look in too much of a hurry and thinking they need to make 200. They don’t have to, they’re going to be nowhere near that if they keep playing in this manner.”

The Scorchers have since rebuilt, however, through the partnership of Ashton Turner and Laurie Evans, who made half centuries off 32 and 25 balls respectively.

Earlier, the Sixers request to have Steve Smith play in the BBL Final was denied.

The Sixers were hoping it would be a case of third time lucky in the their hope to have the prolific run-scorer made available.

But the kings of the BBL were knocked back yet again.

Nick Bertus, Daniel Hughes and Jackson Bird are back for the Sixers while Justin Avendano, Jake Carder and Jordan Silk miss out.

Hughes was racing the clock to be fit but has been selected after having aa last minute fitness test.

‘WE’D LOVE HIM TO PLAY’: BBL won’t rule out Smith exemption for final amid Sixers crisis

HOW TO WATCH: Fox Sports or Kayo

The Sixers lost Australia wicketkeeper batsman Josh Philippe (Covid) on the eve of their dramatic last-ball victory over the Adelaide Strikers on Wednesday night at the SCG. He was the third Sixers player brought down by the virus following the loss of Jack and Mickey Edwards.

Their run of misfortune continued during their controversial win over the Strikers, with Silk (hamstring) ruled out.

The Sixers’ dramatic build up contrasts the Scorchers’, who progressed through to the final by crushing their Sydney rivals last weekend.

It was last Saturday that wicketkeeper Josh Inglis (79) and Kurtis Patterson (64) put on 120 to pave the way for the three-time champions to score 3-179.

In response, the Sixers’ innings got off to a terrible start and were bowled out for 141 — a defeat that would have been all the larger were it not for Ben Dwarshuis’s 28-ball 66.

The Scorchers have named an unchanged XI, while star international all-rounder Mitch Marsh is not expected to bowl.