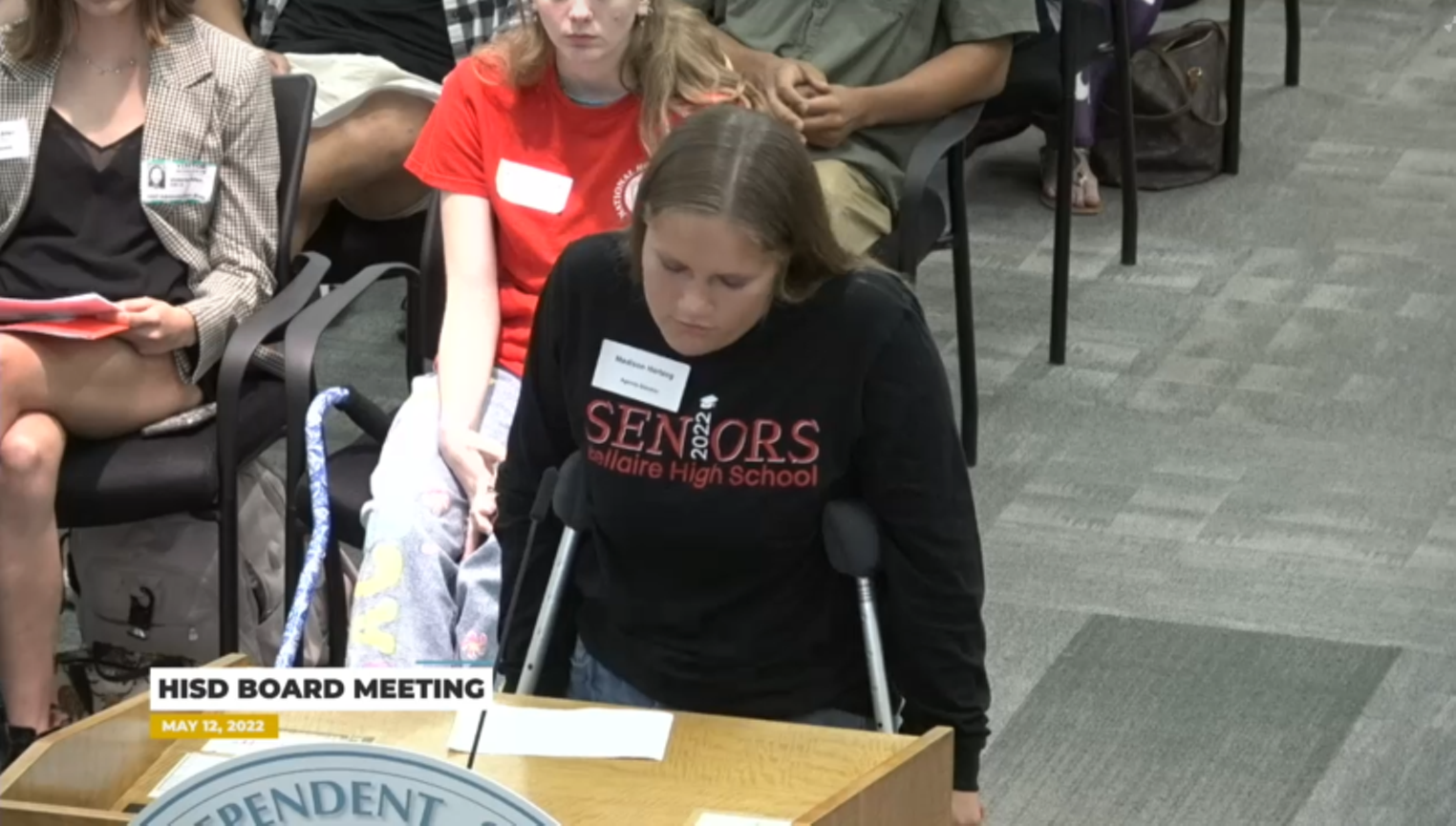 A number of students, parents, alumni and teachers from Bellaire High School turned up at Thursday’s Houston ISD school board meeting to plead for the reinstatement of their principal and accused the district of incredibly poor timing by yanking him from his post on the morning students began statewide academic testing.

Michael McDonough was abruptly removed from his position as principal and reassigned to unspecified duties on May 5 just as students were sitting down to the state’s standardized STARR testing with Advance Placement and IB tests still to go.

Cardinal red was everywhere in evidence Thursday night as one speaker after another told Superintendent Millard House II  and the board that they want McDonough restored to his position. Several threatened a possible walkout at their June 12 graduation if he is not reinstated and there to hand out diplomas. Several also said that McDonough was the main reason they chose to stay with the district and that students and teachers might well leave if he is not their principal.

Bellaire High School had come under fire after a report of bullying and reports that members of the baseball team had mocked and made racist statements — monkey sounds and use of the “N” word — aimed at a Black player on the opposing Westbury High team during a game. At a subsequent NAACP Houston meeting several people called for baseball coach Nick Ozuma to be fired. Ozuma and assistant Robert Manuel have also been reassigned while HISD conducts an investigation into the accusations.

“Our class has been through a lot in the last few years,” senior Madison Hartzog told the board. “Now in midst of STARR, AP, IB testing as well as finals, end of the year activities and important senior milestones you have removed our principal. His absence is noted by all. Please return him. We need him back on campus. Class of 2022 deserves to have him there to finish the year.”

Other students spoke of McDonough’s “positivity,” his frequent roaming of the halls and attendance at extracurricular events and said that he knows everyone’s name at the 3,000-plus student campus.

Levi Fox, a statistician in the making, conducted his own survey of 382 seniors and said more than 99 percent of those responding said they would be willing to protest McDonough’s removal. “Bellaire is a family. We stand by Mr. McDonough in spirit, strength and numbers.”

Teacher Jennifer Blessington, a 17-year teacher (and young adult book author) who’s spent the last six years at Bellaire, pointed out that “Bellaire is a diverse Title I public high school. Forty-five percent of our student body is economically disadvantaged. On raw numbers alone we serve more students in need than most HISD campuses. I can tell you that our beloved principal empowers us to serve these kids because he knows they deserve the best.

“On my first day at Bellaire he told us Bellaire is the school for teachers who like to swim in the deep end,” she said.

“The disappearance of our principal has been destabilizing and has interrupted the continuity of learning for our community, On the day he was removed, teachers received upsetting emails and robocalls during the school day with children in front of us. Kids were asking us what was going on; we had no clue as to how to respond. We have not even been given the courtesy of a staff meeting. I cannot fathom why this district which claims to want to increase enrollment and attract top talent would remove one of the most effective leaders at one of the most effective campuses at HISD. We need a swift and fair resolution.”

The Rev. James Dixon, head of the Houston chapter of the NAACP, commended the board and administration for its investigation.

The Rev. James Dixon, president of the Houston chapter of the NAACP, was one of the speakers Thursday, saying he understood the concerns of the speakers before him, but commended the board for its “independent investigation,” into the matter. Dixon said he was the first Black quarterback at Waltrip in 1981 and faced the same conditions as the Westbury player underwent. He asked that everyone to “let the results of the investigation speaks for themselves.”

But most of the comments were along the lines of what social worker Marnie Hylton had to say:

“As a school social worker at a high school level in HISD, I am appalled at the timing of his removal. This is the end of quite possibly the toughest year on record for students across the city in terms of readjustment, motivation, connection, loneliness, depression, anxiety fights on campus and suicidal ideation,” said Marnie Hylton. “It was the middle of STAFF, AP and IB exams. It was a few weeks from graduation Also the middle of Teacher Appreciation Week.

“From what I can see there was no consideration for the teachers receiving this news in the middle of instruction. This is not acceptable. It seems clear to me that the decision to remove Principal McDonough at this time did not consider the effect on students.”