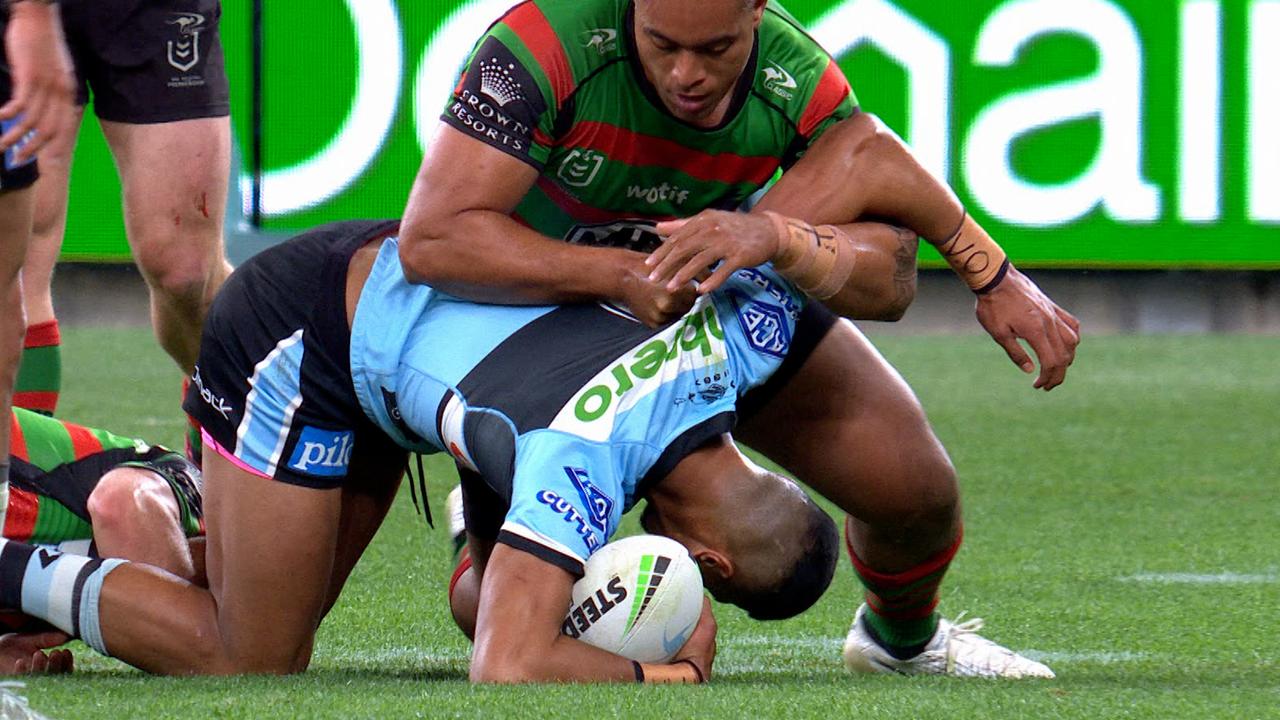 The Rabbitohs will be sweating on the match review comittee after prop Tevita Tatola was placed on report for a chicken wing tackle on Sharks winger Ronaldo Mulitalo.

Tatola was guilty of bending back Mulitalo’s arm to roll him on his back, but the severity of it sparked a vigorous debate on the Fox League panel.

“I think Souths have some concerns moving forward with some injuries and the potential suspension to Tevita Tatola,” Michael Ennis said.

“He has been their rock. He has been awesome through the middle and another 152 metres tonight.

“I think he’s in trouble. He readjusts and whilst he’s trying to turn the player onto his back, you can’t use the arm to do that.”

But Gorden Tallis was having none of that assessment believing Mulitalo milked a penalty.

“I think it’s a grade two carry-on from the winger here and I reckon it’s preschool. Look at that carry-on.”

Braith Anasta agreed Mulitalo milked it, but believes Tatola could still be in hot water.

“He milks it, but there is a movement there,” Braith Anasta added.

NEW ERA: How a rookie coach broke Bennett’s curse… and the secret to his rise

Tallis believes any player would hate to see someone suspended for a preliminary final for that type of tackle.

“If that tackle happens to you, do you want the player that does it to miss a game?” Tallis asked.

“So what do we look at it like?” Tallis said.

“You have got to look at it on merit,” Corey Parker said.

“That’s not how they are going to judge it,” Parker said.

“That is completely irrelevant. There is no doubt there is a milk. The second effort doesn’t help.

“I don’t think he will miss a game next week.”

“That wasn’t the question,” Tallis said.

“Would you want to miss a week with that tackle?”

“No one wants to get suspended for any tackle,” Parker said.

“I don’t think it was that bad,” Tallis said.

“If you do anything illegal then you get suspended for it,” Ennis said.

“I think that is a chicken wing.”

“Do you think it is bad enough to get suspended?” Tallis said.

“I think he will get suspended,” Ennis said.

However, Parker and Anasta believe a fine might be sufficient given Tatola pulled out.

“I think he will get a fine to be fair,” Parker said.

“You could see what he was trying to do. It doesn’t make it right. I don’t think he will get suspended.

“He is trying to get the player onto his back, but you can’t do that by jamming his arm back,” Ennis said.

“I think he stopped at the point where he thought, hang on this could get ugly and I’m in an awkward position,” Anasta said.

“Obviously Mulitalo has gone, I will get a penalty out of this.”