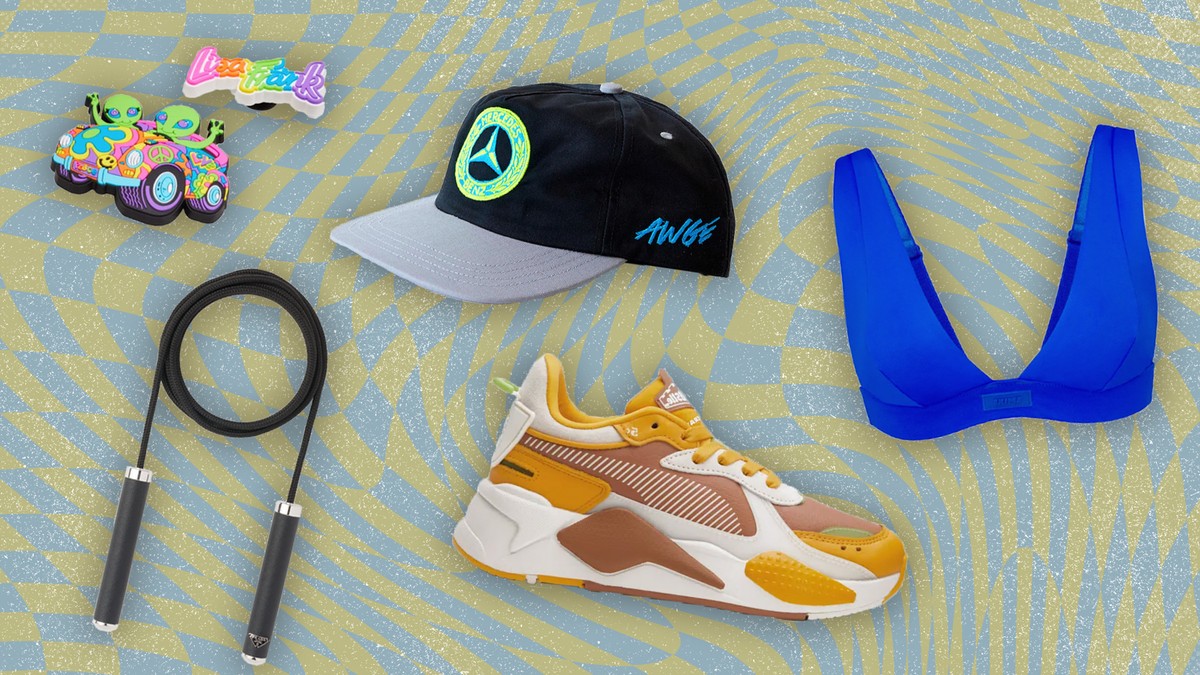 There’s only one way to make it through the day after St. Paddy’s celebrations: Take that leprechaun high from the night before and channel it into finding your own, proverbial pot o’ gold. Throw back that cold Gatorade, and treat yourself to a mulberry silk sleep mask and a 16-ounce bag of cheese dust; indulge in a long weekend at a kitsch hotel where you can finally find a little bit of peace and quiet (lucky for you, it’s Sleep Week); or ball out on a vacation to Iceland’s Blue Lagoon (no leprechauns; Just Huldufólk).

We’re always trawling the internet for the best new goods, but this week saw us feeling especially sleep-deprived (up yours, DLS) and antsy for spring. If last week’s drops gave us fancy candles and penis-themed blankets, then this week’s bounty shook us out of hibernation and into full Rumspringa mode with launches that represent many brand “firsts.” We the people have been given the first athleticwear line from Abercrombie & Fitch, and the first swimwear collection from Skims. We’ve also been spoiled by Puma’s collab with White Castle, a luxury jump rope, Great Jones’ latest bakeware accessory, and a gold-dusted pie made by none other than Megan Thee Stallion.

Loosen that belt, and let’s dig into the best drops of the week, from streetwear to sleepwear and so much more.

Abercrombie & Fitch is officially cool again, only this time, they’ve done some soul searching and revamped their image. “It’s like the preppy kid from high school grew up, went to therapy, and started churning out Tony Soprano-worthy fits,” writes Mary Frances Knapp in our rundown of the iconic Y2K brand’s return to relevancy, which is why we’re stoked to see Abercrombie launch its first activewear line and sub-brand, Your Personal Best (YPB) this week. The line includes mens- and womenswear pieces made out of “super soft, squat-proof and breathable bottoms, performance tops with four-way stretch, sweat-wicking and anti-odor elements,” and includes sophisticated, gray and mauve tie-dye colorways.

Does Kanye ever sleep? The latest sneaker from the rapper’s Adidas line is equal parts sunshine and creature from the deep. Dubbed the “Mono Safflower,” this is the third incarnation of West’s “dad shoe” silhouette, and features a futuristic, caged design and an RPU cage that glows in the dark.

As you may know, A$AP Rocky has been serving as a guest artistic director for PacSun for a while now, and has dropped several crazy-cool lines for the surfy-skate-y retailer, including some amazing flame-print Vans. The latest drop is a collab between AWGE—A$AP’s creative agency—and Mercedes-Benz, resulting in sweats, tees, and more emblazoned with the auto giant’s iconic emblem, all of which you can preorder now.

It’s Sleep Week, which means some of the dreamiest sleepwear and bedding brands are either releasing hot new drops or offering major Sleep Week sales—or both, as is the case at Brooklinen, one of the internet’s favorite bedding companies. It’s released five new bedding colorways for spring that include limited-edition pastels such as Faded Lemon, Maple Sugar, and Bungalow Stripe—their first ever reversible duvet!—and plus, Brooklinen is giving shoppers a set of free pillowcases (up to a $60 value) and 10% off with any order of $100 or more.

We can’t wait until it’s 2045 and Great Jones is making urns. We’ve so enjoyed watching the aesthetic cookware brand expand over the years, and thrive in kitchens and Instagram feeds alike with its mini Dutch oven and Art Deco-inspired bakeware. Now, the brand has made the perfect cooling rack for its sheet pans, dubbed “The Big Chill.” It’s made from the same non-stick technology, and can be used for everything from baking cookies to roasting bacon, and is totally dishwasher-safe.

It’s hard to believe Crocs turned 20 this year. Love them or hate them, you can’t deny they’ve given us some of the most thrilling, chaotic footwear, and the Jibbitz (yes, that’s the formal name for those Crocs charms) are the icing on top of the clog. In true Y2K fashion, the brand has collaborated with the elusive Lisa Frank to bring the people what they really want on their shoes: dolphins, unicorns, and aliens in Volkswagen Beetles.

Megan Thee Stallion’s new single, “Sweetest Pie,” now has an actual pie that fans can serve while savoring her latest song. Created in partnership with Goldbelly, the dessert is described as a “sweet n’ salty twist on a pecan pie” that includes “a mix of coconut, pecans, butterscotch chips and glistening with a dusting of edible gold.” Amazing.

Is it practical? No. But the thing about being a huge, legendary fashion house like Prada is that you can kind of do whatever you want, and that might include releasing an exorbitantly expensive piece of athletic equipment just as proof of concept of a beautiful design. Prada’s jump rope is made with Re-Nylon, a material made from recycled plastic pulled from the ocean, and is topped off with Saffiano leather handles. The case alone is probably worth, like, $600.

Perhaps jealous that Crocs has had collabs with both Hidden Valley Ranch and KFC, Puma has teamed up with White Castle, kingdom of sliders, for a show that instantly makes us crave super-soft toasted white bread, ground beef, and pickles.

There’s been so much internet anticipation for Skims’ swimwear line, especially because Kim K’s shapewear and apparel brand actually makes some of the most comfortable basics out there, from buttery loungewear to a wearable duvet housecoat we can’t stop thinking about. There are some pretty sick cutout-centric one pieces, sporty bikinis, and flattering cover ups we’d love to rock on our next vacation (or at least to the inflatable pool in the backyard).