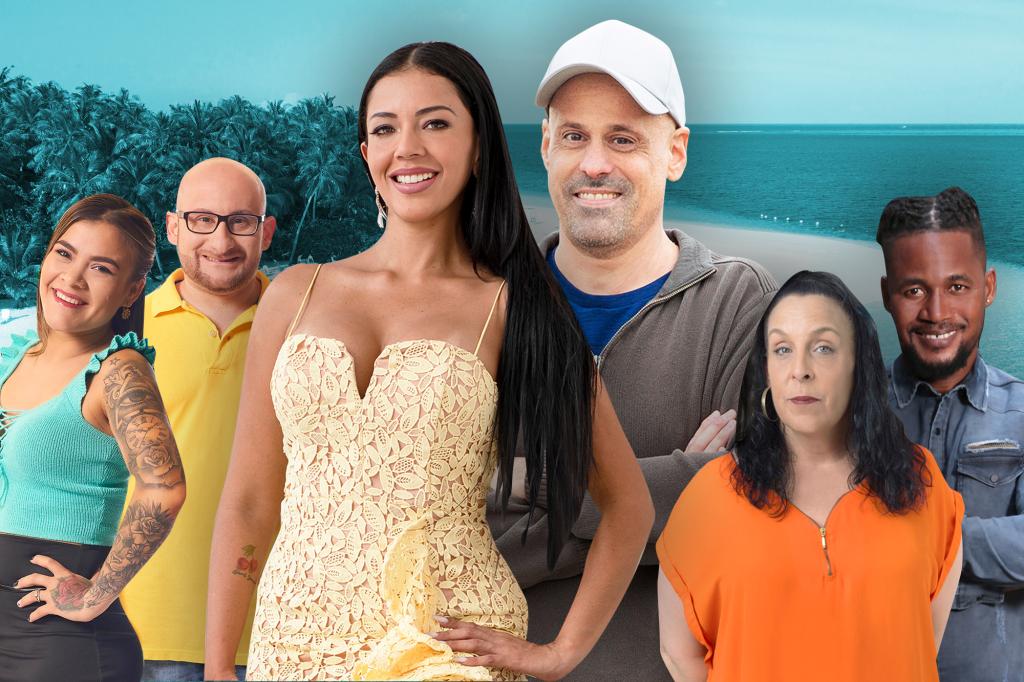 Theologian Henri Nouwen wrote, “In true love the smallest distance is too great and the greatest distance can be bridged.”

In the latest installment of “90 Day Fiance: Before the 90 Days,” we watched as the idealistic and potentially unhinged cast attempted to bridge those distances and differences, all in the name of love.

Author’s Note: There are a few cast members who do not appear in this list. Rest assured that I went far into the interwebs trying to find Johnny Chao and Mahogany Rocas star signs and twelve years deep into Hamza Moknii’s Facebook feed looking for his birthday to no avail, though I can confidently report that Hamza’s Mom is a Gemini, Mahogany has deleted her Instagram account and Johnny once caught a fish in Lake Michigan.

Alina is disqualified for obvious and aforementioned reasons. Now, on to the rest! Read along to discover more about the astro identities of the remaining cast and which star your zodiac sign aligns with the most.

In terms of the physical body, Cancer rules the torso. Fittingly, it was the image of Ben’s bare chest that prompted Mahogany to reach out to the former pastor/current fitness model and begin their fraught affair. Debilitatingly romantic, Cancers crave love; particularly the feeling of being needed and the security of being coupled. This desire often supersedes reason or reality, a fact made evident in Ben’s history of being catfished. When wounded emotionally, Cancer’s often retreat inward to the quiet safety of themselves and their metaphorical shells. As Ben admitted in the most Cancerean Instagram post of all time, “Taking a little break from social media for a bit. Best way to find your center is finding a quiet place, devotions with God, being in nature, thought provoking music, and kittens. Lots and lots of kittens.”

Symbolized by the almighty lion, Leos are born to shine and to be seen, themes evident in Jasmine who describes herself as “hot, beautiful, intelligent and untamable.” Though she sees herself as a wild animal, Jasmine keeps Gino on a short leash. Because Leos insist on being the top priority of everyone in their lives from their electrician to their significant other, they don’t take kindly to competition and their formidable pride is often undercut by a deep jealous streak. Cue Jasmine insisting Gino keep her fully apprised of his whereabouts and interactions with waitstaff lest any lusty checkout girls fall prey to his dad jeans and maniacal laughter.

Undeterred by obstacles, Virgos like Memphis see the potential for greatness in all things and all people, most notably themselves. We see this dedication to personal betterment reflected in her overcoming her difficult childhood and finding success in her medical career and her role as a single mother. Virgo is an earth sign and despite their reputation as punishing perfectionists, they will forgive much if they have skin in the game and a skin game to play. Cue Hamsa and Memphis not really understanding much beyond “sexy time” in terms of language but deciding to make a go of it anyways. A practical sign suspicious of surprise, it tracks that a Virgo like Memphis would count “consistency” as Hamza’s best quality.

Virgo is ruled by Mercury, planet of communication and mental processing and VirgBro Caleb is into communing in all forms, even the metaphysical. From tarot cads to intuitive intention setting by bonfire, Caleb flexes deep Virgo vibes. Add to this his very Virgo commitment to bodily health which includes packing a suitcase full of condoms and protein shakes for his trip to Turkey.

Libra is ruled by Venus, planet of love, beauty, attachments, entanglements and music. Enter Nigerian singer Usman whose megawatt smile, smooth sounds and considerable charms are all emblematic of his sign. The influence of Venus makes Libras particularly susceptible to flattery and praise which explains how Kim transitioned from online fan to potential girlfriend. Libras can be duplicitous in their attempts to find love which may be why Usman was chatting it up and laying it on thick with two American women at once.

Libras are an indecisive ilk that struggle to truly trust themselves or the strength of their convictions which helps explain why Usman wanted his first meeting with Kimberly to include his friends and business associates during a video shoot as he looks to them to measure his own responses. We see this theme continue with Usman’s decision to call Zara after Kim’s departure in order to calibrate his feelings for Kimberly. Libras usually gloss over difficult truths with a wink and a smile and flat out lie to avoid conflict and maintain stasis; this technique inevitably backfires and sometimes ends with them catching a drink to the face.

Capricorn is ruled by strict, boundary loving planet Saturn. In terms of archetype, Capricorn is thought of as the builder and the father figure of the zodiac, supportive and strategic at best, punishing and rigid at worst. Enter Mike Berk, a Lego constructing, elder caring Capricorn from the great state of New York. Mike was a fan favorite, earnestly trying to kill the dull ache of loneliness through his relationship with Colombian born model and mother of two. Ximena. Mike seemed committed to supporting Ximena and her children, even buying the boys toys before his trip to meet them.

Things took a turn and the bad dad vibes came a tumbling out when Ximena wanted to end their relationship. Cue Mike’s gaslighting, abject rudeness, sex work shaming and Ximena’s revelation that the couple actually met not on an international dating site, but through her web cam work. Lording his financial support over her in an attempt to maintain power and control is classic toxic paternalism and an example of one of the darker expressions of the Capricorn archetype.

Earth signs seek purpose and find their footing in the tangible and it tracks that a Capricorn like Ella would be into animal husbandry, horseback riding and farm life in general. Capricorn’s have high standards for themselves and punishing expectations of others. When disappointed they go to great lengths and unimaginable low blows as was the case for Ella who stepped out on Johnny when he stood her up for their planned trip to Dubai. The fact that she describes the indiscretion as “my moment of weakness when I decided to get animalistic,” is further evidence of her earth sign nature.

Aquarians are the odd balls of the zodiac, enter Geno ‘weirder than a bag of hair’ Palazollo. From his dark web Viagra to his diet of TV dinners, pension for baby talk and electric toothbrushes as love tokens, our man is a strange one. The weirdness and white sneakers seem to be working for Gino as his Panamanian fiance Jasmine cannot get enough of him As she admits, “His unsexiness is sexy to me, I love it.” A fixed sign, Aquarians prioritizes intellect over emotion and tend to wear masks or in this case, hats to mask their vulnerable, authentic selves. They can also lend super villain vibes and Geno is no exception. While he at first seems like a hapless, love struck Doug Funnie everyman, it was later revealed that he shared Jasmine’s nudes with his ex and messaged other women outside of their relationship. Behavior as appalling as microwaveable Salisbury steak.

Pisces are dreamy, optimistic and romantic to the point of delusion, a trifecta made manifest in Kim whose attraction to complicated men includes a Michael Jackson obsession and a long shot at love with the much younger Nigerian musician Husman. Pisces are painfully optimistic, choosing as they do to believe the best in people, enough to abide the degrading designation of “potential girlfriend.”

A mutable water sign, Pisces often exhaust/martyr themselves trying to be all things to all people. Their love is the self-less variety that knows no bounds, a fact demonstrated by Kim offering Husman the option to take a second wife and father children outside of their relationship.

Pisces is ruled by Neptune, planet of dreams and delusions, there to remind us that things, and especially people, are not always what they appear to be. Consider Pisces super babe Ximena, first cast as an opportunist preying on the gullible generosity of Mike, Ximena has proven herself to be the most principled, composed and mentally stable member of the cast by far. Ximena admits that in love, “I always find the crazies.” Indeed, empathetic to a fault Pisceans gravitate towards wounded birds and criminals, skipping towards the banner of red flags with good will, pastel paints and a bubble gun.

On the look out for a dream lover, folks like Ximena easily buy into the fairy tale and are deeply shaken when the prince in question is revealed to be a farting, slut shaming troll who can’t emotionally support them or find a proper receptacle for his snot rag or simmering rage. Here’s hoping our Pisces princess finds true love and a healthy dose of chivalry down the line.

Astrology 101: Your guide to the stars

Astrologer Reda Wigle researches and irreverently reports back on planetary configurations and their effect on each zodiac sign. Her horoscopes integrate history, poetry, pop culture and personal experience. She is also an accomplished writer who has profiled a variety of artists and performers, as well as extensively chronicled her experiences while traveling. Among the many intriguing topics she has tackled are cemetery etiquette, her love for dive bars, Cuban Airbnbs, a “girls guide” to strip clubs and the “weirdest” foods available abroad.