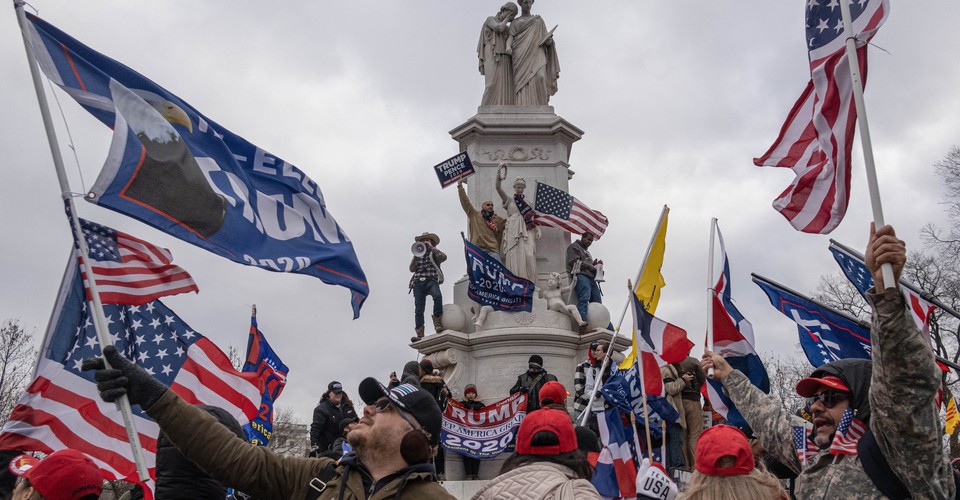 History finds us two ways, to borrow from Hemingway: gradually, then suddenly. One year after Donald Trump led his supporters in an attempted coup against the United States, the nation is still very much in the throes of that attack.

Despite blaring sirens and flashing lights, despite ever more visible signs of the fragility of American democracy, envisioning what America will become if we fail to prevent the next coup attempt is strangely, terrifyingly difficult. As my colleague George Packer argued recently, only by correcting this failure of imagination will we have a shot at crawling our way out of catastrophe. Those who seek to trample democracy in America have a coherent plan and are resolute in carrying it out. “They will certainly try again,” Barton Gellman wrote in his essential cover story about the coup attempt. “An unpunished plot is practice for the next.”

It’s not just that the stakes are high; we’re also running out of time. The things we stand to lose aren’t just abstract ideals, but actual freedoms. I find myself thinking often of a recent conversation I had with my colleague Anne Applebaum, trying to imagine what it would be like to live in the United States after the dissolution of democracy. She described the frightening likelihood of bloodshed—a kind of violence not seen since the Civil War—and a profound level of corruption. “I’m afraid it could happen very fast,” Anne told me. “I mean, it could happen within weeks or months of a disputed and probably violent inauguration. Preventing that from happening really should be every citizen’s first priority.”

For generations, dating back to our magazine’s founding amid fracture in 1857, The Atlantic has been preoccupied with keeping the American idea—and America itself—alive. In recent years, our concern with growing threats to democracy has perforce been at the core of our journalistic mission. As our editor in chief, Jeffrey Goldberg, wrote in our most recent issue, “The Atlantic, across its long history, has held true to the belief that the American experiment is a worthy one, which is why we’re devoting so much of our journalism in the coming years to its possible demise.”

It is in that spirit that we offer this reading list, a guide to our recent work about this nation in this moment, and to the peril our democracy is in. We hope you will find it enlightening, useful, and even hopeful.

The Radicalization of the GOP