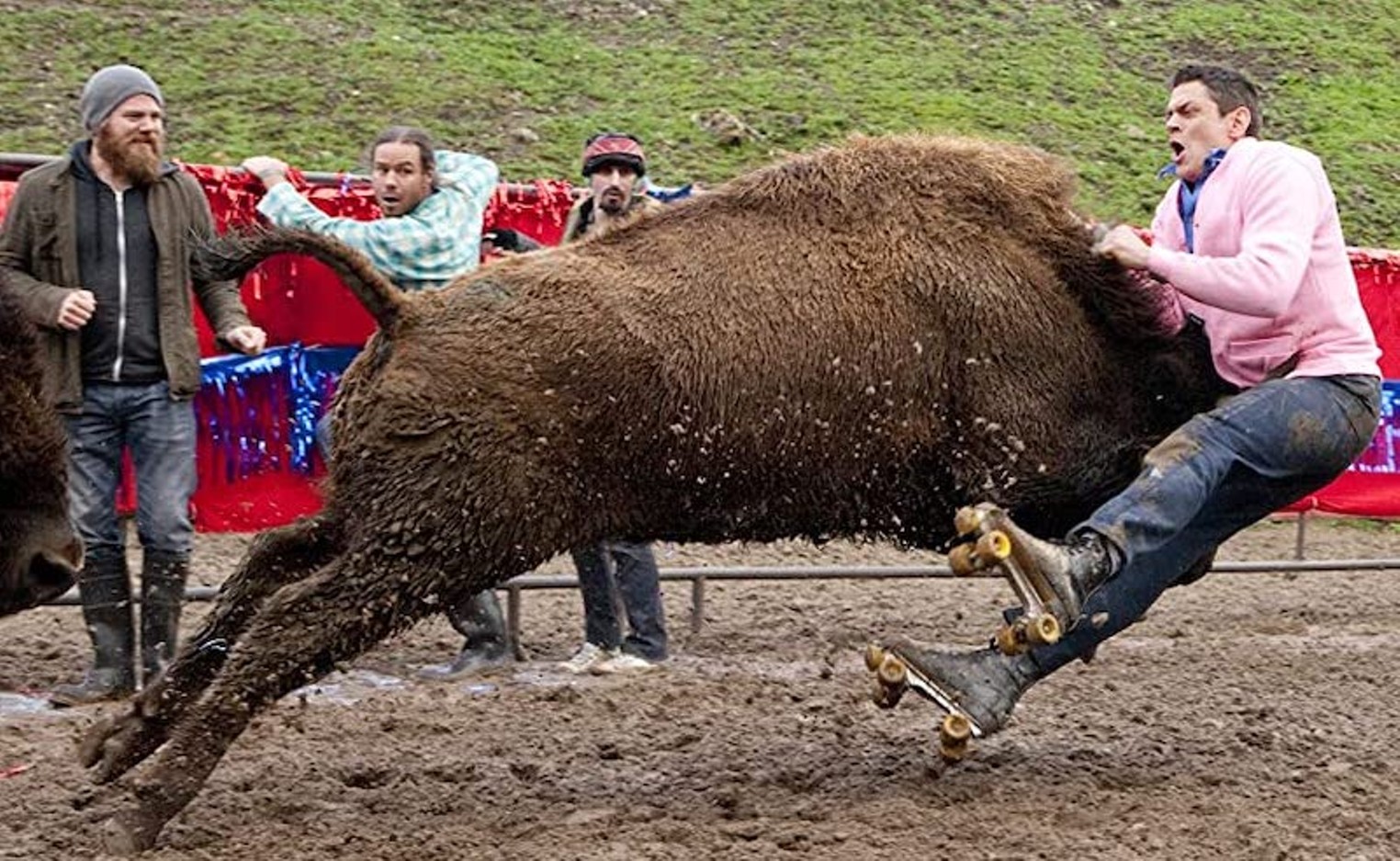 The fourth and (mercifully) final installment in the Jackass film series comes out next week. Jackass Forever will feature new faces (Jasper Dolphin, Zach Holmes, Rachel Wolfson and others) replacing Bam Margera, who was fired by Paramount while shooting, and Ryan Dunn, who died in a 2011 car wreck.

The movie will also showcase lead Jackass Johnny Knoxville’s true hair color for the first time, but that should be the extent of the changes. Judging by previews, the gang is planning to go out with their characteristic joie de vivre coupled with an utter lack of regard for personal safety or hygiene.

And thank Rip Taylor for that. After the two-year (and counting) garbage fire that has been the 2020s, I’m ready to spend a couple hours laughing my ass off while simultaneously trying not to puke. The Jackass franchise has taken a lot of heat from hypocrites who probably enjoy America’s Funniest Home Videos without irony. But as I said in my review of Jackass 3-D, the show’s devotion to experimentation and trial-and-error make it a lot more like MythBusters.

Only nobody has a college degree, and at the end, everybody farts on Adam.

And so, to warm you up for a night of body trauma, male frontal nudity, and scatological excess, I present a list of some of the most memorable stunts from the preceding three movies. Special consideration has been given to complexity, violence, and outright gross-outness. Enjoy!

“Ghetto Defibrillators” (Jackass 3.5)
Many stunts exemplify the guys’ penchant for rudely waking each other up. I picked this one for its brutal perfunctoriness.

“Pin The Tail on the Donkey” (Jackass 3D) –
Ehren McGhehey takes a (relatively) gentle hoof to the junk. In retrospect, this could’ve gone a whole lot worse.

“Paper Cuts” (Jackass: The Movie)
I know some people who think this is actually the worse stunt in the entire series. Having gotten paper cuts (involuntarily) on the tongue, I don’t entirely disagree with them.

“Electric Avenue” (Jackass 3D)
I feel like those defibrillators up there must not have made the cut for this bit.

“The Fart Mask” (Jackass Number Two)
“Steve-O puts on a helmet connected to a tube into which Preston Lacy farts.” Sometimes the official description needs no embellishment.

“The Toro Totter” (Jackass Number Two)
My friends and I used to get on a neighborhood swing set and play a game called “Wreckin’ Ball,” in which we would swing in elliptical orbits with the intent of slamming into each other. I feel certain we would’ve incorporated a bull if one had been available.

“The Leech Healer” (Jackass Number Two)
The eyes have it.

“Riot Control Test 1” (Jackass: The Movie)
Smart as it was to wear body armor over every area except where the shot was going, maybe a helmet, too? It feels like a lot of trust to put in a guy you just met not to errantly put a slug in your head.

“Riot Control Test 2” (Jackass Number Two)
But it was apparently a pleasant enough experience that Knoxville convinced Margera and Dunn to join him for the next iteration.

And speaking of low-rent: is that Saran Wrap on that mine? May be time to up that State Department budget.

“Enema Long Jump” (Jackass 3.5)
This could be an Olympic track and field event, but they’d have to factor in the enema splashback on the landing.

I, uh, couldn’t find a clip not hosted by an adult video site, so you’ll have just to take my word for this one.

“The Fish Hook” (Jackass Number Two)
The one stunt Knoxville reportedly feels bad about. Speaking as someone traumatized at a young age by Jaws, he *should* feel bad about it.

“Wasabi Snooters” (Jackass: The Movie)
I imagine this is much worse for you than cocaine, while acknowledging I have tried neither.

“Poocano” (Jackass 3D)
Watching these movies as many times as I have, one gets a sense of each of these guys’ specific … kinks, if you will. Knoxville seems to legitimately dig pain, for example, and Dave England really likes to poop on things.

“The Brand” (Jackass Number Two)
One of the reasons cattle are tied down/immobilized during branding is so the result doesn’t look like a hologram. Lesson learned, I guess.

ETA: Sure are a lot of age-restricted clips here. Sorry about that.

“Cajun Obstacle Course” (Jackass 2.5)
Has to rank up there as one of the more elaborate stunts in the series. Informative, too: i.e. never drink out of a strange can.

“Department Store Boxing” (Jackass: The Movie)
Evel Knievel once said, “You’re never a failure until you fail to get up.” He might have rethought that position if he watched Knoxville rising to face Butterbean for another round.

“Poo Cocktail Supreme” (Jackass 3D)
Apparently they weren’t allowed to use actual human feces because of health regulations. So there’s that.

“Terror Taxi” (Jackass Number Two)
The climactic stunt within a stunt (within a stunt) remains the magnum opus of the franchise and a stellar example of just how much misery the boys will visit upon their so-called comrades. Now, who’s up for crabs?

BONUS:
“Penis-Breaking Motorcycle Backflip” (Jackass Presents: Mat Hoffman’s Tribute to Evel Knievel)
“Whatever you do, do not ditch the bike in midair.” I wonder if Knoxville had a David Kessler on the moors moment where he thought of Mat Hoffman’s fateful words before going, “Oops.”