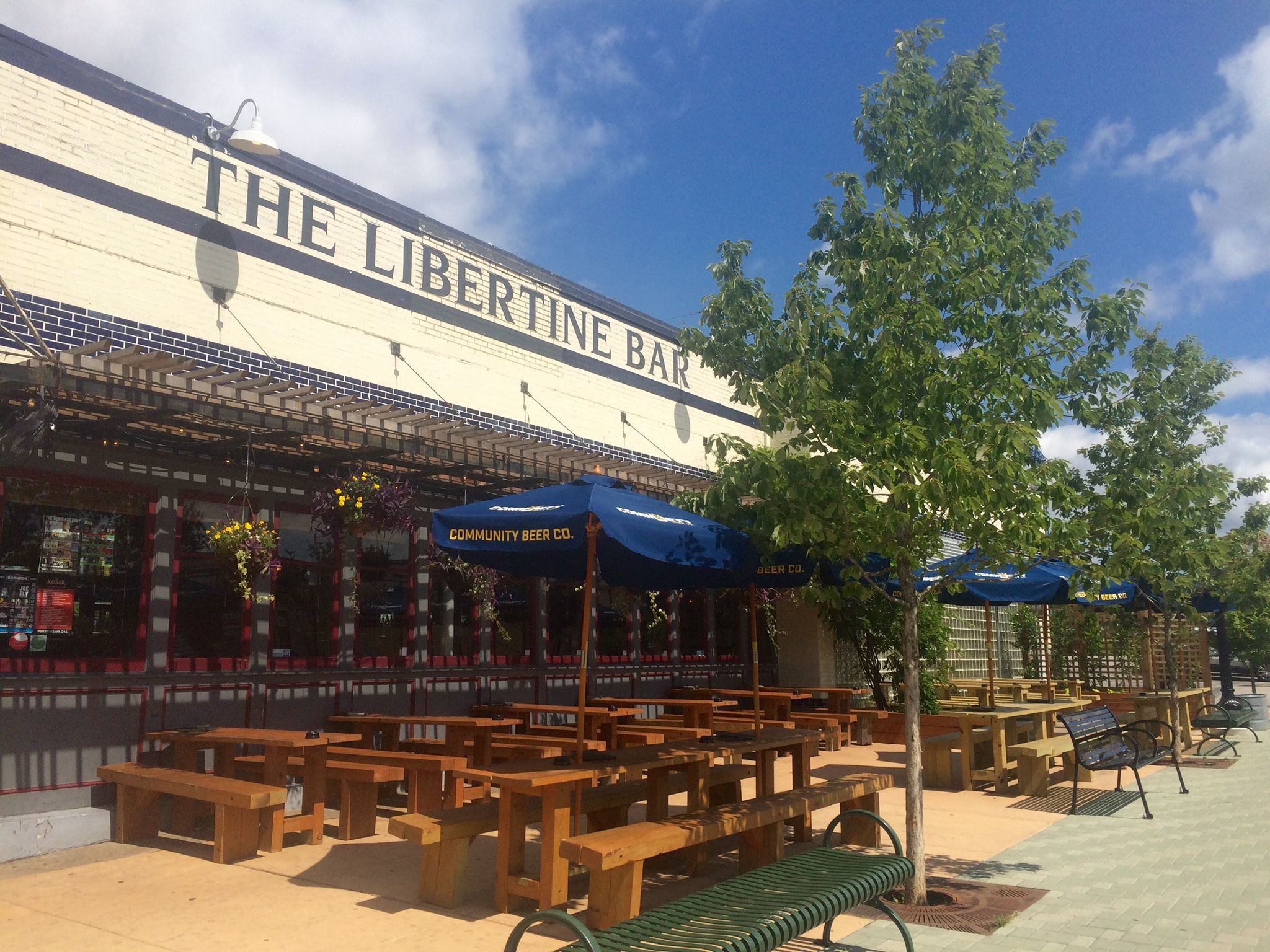 The Libertine Bar’s Brass Knuckle Corndog Beatdown is a stupid, unhealthy, and wasteful annual spectacle. It’s a serious competition ironically draped in a bunting of over-the-top faux patriotism. Ties are settled over cheap liquor. It’s an easy argument that this very battle of consumption epitomizes 21st century Dallas—and Texas and America. That is why it is this city’s best Independence Day party.

Then again, I have won it three times and placed second twice. My objectivity is debatable.

The first formal eating contest I ever entered—or even attended—was the Libertine’s 2009 inaugural Beatdown. My kids, then 8 and 12, made silly signs and thought the whole thing was a goofy lark.

But I took it seriously. I trained with a couple of 5-minute practice sessions. I figured the only feeling worse than a gut stuffed to the brim with however much garbage food it took to win would be a protruding stomach with no prize. The practice paid off: I won with 16 corn dogs, used some of my Libertine gift certificate on beer, and deposited the day’s activities in an alley behind the Double-Wide Bar as fireworks lit up the sky above Fair Park a couple of hours later.

It was so stupid I had to do it again. Some child who didn’t say a word to anyone and never removed his earbuds demolished us in 2010. (I tied another guy for second.) The rail-tequila triple-shot tiebreaker made clear I had more experience at that sort of nonsense.

How it works: Contestants sit together at long tables facing the bar. Screens flash a countdown that ticks away the longest 15 minutes in sports. (The most famous eating competition in the world, Nathan’s Hot Dog Eating Contest, is only 10 minutes.) Winners get a $100 Libertine gift certificate for first, a $50 certificate for second, and a handful of quarters for third.

It has attracted legitimate competitive eaters. Wichita Falls’ “Nasty” Nate Biller, currently ranked No. 36 in the world by Major League Eating, wiped the floor with us in 2013. He got 26 down, nine more than my second-place (17) and still plenty more than my 2011 personal best of 19. There were rumors he had already competed in another food contest that day and won it, too.

Last year’s Beatdown was my proudest yet. Comp-eating against me for the first time was my son, Lyle, who is now 20. (According to all but one of the IDs in his wallet.)

A few nights before, Lyle and I split a box of State Fair-brand frozen corn dogs for a practice run. I coached him to pay no attention to the hares who will race out to an early lead—this is a marathon, not a sprint. For the love of God, do not gag. Shove as much into your mouth as you can around the 10-second mark. And don’t get in your own head.

There will be a moment, I explained, when you behold the ghoulish, red-faced screaming spectators—some of whom will be actively rooting for you to lose your lunches—and you will be filled with so much contempt for them and yourself you will want to walk out of the bar, shuffle along Bell Avenue past Voodoo Chile and Death or Glory Tattoo into the setting sun, and never talk to another human again. This impulse must be ignored. And I’ll be damned if the SOB didn’t beat me in our scrimmage. Paternal pride conflicted with the dismay of losing.

We arrived at the Libertine with a few of Lyle’s friends. I took a moment to consider how much had changed in the dozen years since he held his little hand-drawn sign to support me in 2009. His now 3-year-old half-brother, Malcolm, and stepmother, Emily, would cheer us both on. My daughter, now 24 and carving out a place for her whimsical and surreal work in the Baltimore art scene, would support us from afar.

A couple of Lyle’s friends, Brandon Hambrick and Nia Simone, competed alongside us. Nia quickly began filming herself and narrating for Instagram Live mid-contest. It was clear she was only in it for free corn dogs.

Someone always makes the mistake of imitating Nathan’s Famous competitors by dunking their corn dog in water. Two or three dogs later, their cup is foggy with grease and suspended particles, broken clumps of batter dissolving at the bottom. Not a winning strategy.

My routine, however, is: Pull out the stick, give the dog a dab of ketchup and mustard, break it in half, chew each three or four times, and wash it all down with water like a handful of pills. The condiments keep the cornmeal from clumping into a dry mash, and the right amount of water sends it all surfing down the esophagus without a hitch. I love corn dogs, so the first three or four go down easy. With each passing minute, though, the frankfurters seem increasingly salty and greasy and their batter encasements grow sickeningly sweet. The Heinz becomes treacly and the French’s turns acrid.

Lyle was nauseated before it started. His decision to fast before proved to be a tactical error. He began at a steady, methodical clip but slowed as the clock wound down. I was on pace for a dozen or so—not nearly the number I expected a win to take, and my son was behind me. These corn dogs seemed bigger than our practice dogs and those from previous years.

But with a couple minutes left, a friend counted the discarded sticks in each contestant’s pile. She gave me a reassuring thumbs-up and mouthed, “You’re winning.” I relaxed and settled in for the end without the usual desperate cramming.

As the crowd shouted the final “Ten! Nine! Eight!” countdown, Lyle looked queasy. His eyes were closed. He was breathing in the measured puffs of a man desperate not to call Ralph.

I patted his shoulder. “Almost done, pal, hang in there,” I said.

Moments after the clock hit 00:00, I heard a splash and assumed someone knocked over a water pitcher. Then I saw Lyle leaned over his empty corn-dog basket. Somehow, nobody else seemed to notice except the horrified Nia on his other side.

Our sticks had already been counted, though. Moments later it was official. With my total of 10 and his eight, we were not only the first parent-child pair of competitors in Brass Knuckle Corndog Beatdown history, we were the first such duo to win its top two prizes.

In the dizzy, meat-sweating delirium of our shared victory, Lyle vowed to Central Track editor Stephanie Salas-Vega he would beat me the next year. As of this writing, though, he doesn’t plan to compete Monday. But by game time, who knows? Years ago, I thought I had retired too.

Get the SideDish Newsletter

Dallas’ hottest dining news, recipes, and reviews served up fresh to your inbox each week.