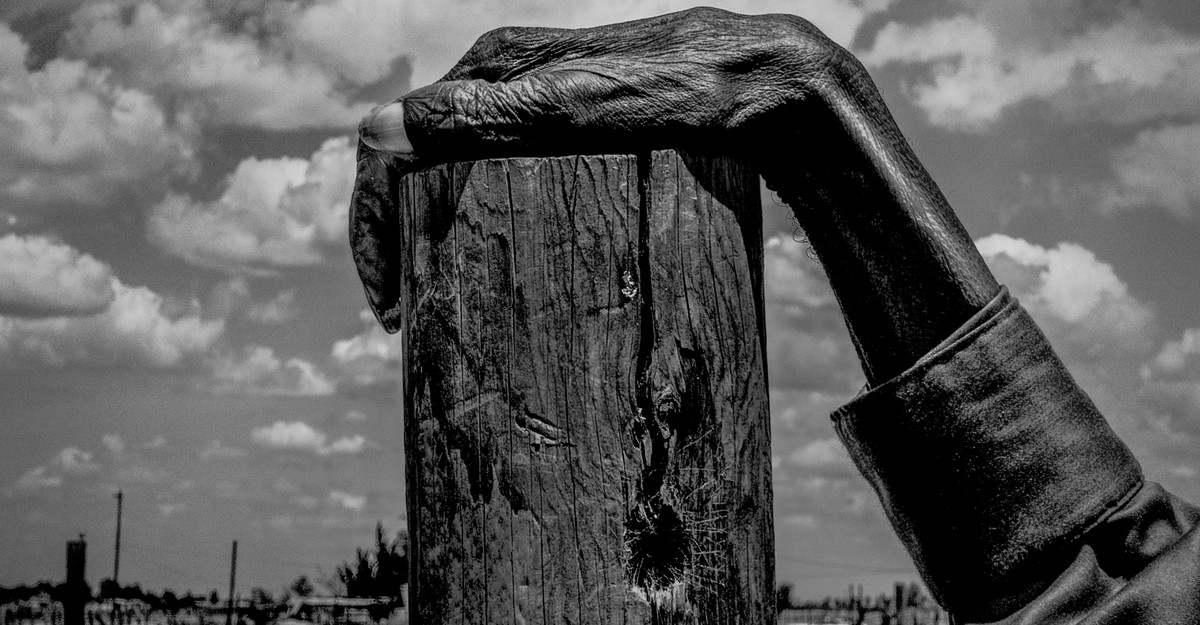 When I moved to the San Francisco Bay Area 10 years ago, I bought a pair of rain boots. I’ve worn them once. The region is currently in what the National Oceanic and Atmospheric Administration calls a “severe drought.” During the past decade, California has experienced two periods of “exceptional drought,” the agency’s highest drought ranking. The effects of such conditions are visibly apocalyptic: piebald street trees, empty orchards, horizontal stripes etched on the shoreline of lakes and reservoirs. Hillsides of flame-orange pine trees killed by beetle infestations foretell long and intense fire seasons.

I did discover high water at a local flea market, though. Sifting through a box of old photos recently, I turned over an early-20th-century postcard to find three women in a rowboat, wearing long dresses and neat updos. They are attended by a little boy, and all four of them are floating casually down a residential street. As a photo historian, my first move was to try to identify the image. Where and when was it taken? Who were these stoic women? In searching for them, I found something surprising: a trend in visual culture that reaches far beyond the borders of California. Drought and flood might seem to be two sides of the same coin, but the former is far less documented than the latter is.

In state museums and California-based archives, I uncovered a veritable deluge of flood pictures—more than 7,000 of them depicting that state alone. But when I looked for corresponding evidence of drought, the archives turned up very little. Only a couple dozen photographs showed drought in California.

The gap in the visual record is particularly striking during a summer when parts of nearly every state are experiencing abnormally dry conditions. In much of the West, water is in short supply even under normal years. The dearth of drought imagery hints at, and contributes to, a historical amnesia. But rather than planning for dry conditions that, because of climate change, are likely to become far more frequent and deadly, Americans seem incapable of even remembering them.

Around the world, the landscape itself records our long history of floods. Recent inundation is easy to see in high-water marks, which trace the edges of the tide with soil and seed deposits. Sometimes people memorialize these marks, carving into stone and labeling the lines with dates, like a child’s growth chart drawn on a door frame.

Floods have also been depicted widely in sketches, engravings, and paintings, as well as more recently in photographs. Water is an alluring subject for the artist. The Japanese artist Hokusai depicted water in all forms and seasons in his wood-block prints. Leonardo da Vinci’s notebooks are full of drawings of rivers, rains, and roiling waters. The sudden, uncanny catastrophe of flood also made a spectacular subject for photographers in the 20th century. In local history museums and archives and even at flea markets, I have seen thousands of pictures of people paddling down streets in canoes, past islands of peaked roofs and rafts of floating furniture.

By comparison, the history of drought—which has shaped humanity just as floods have—is nearly invisible. The return of normal water levels erases the evidence of former scarcity. Crops are revived, and the trees leaf out exuberantly. As John Steinbeck wrote in the opening pages of East of Eden, “It never failed that during the dry years the people forgot about the rich years, and during the wet years they lost all memory of the dry years. It was always that way.” Out of sight, out of mind, says the water as it rushes in to rewrite the past.

That’s one reason drought is difficult to capture in pictures. Another reason is that there’s no singular moment of action for the artist to focus on. Climatologists describe drought as a slow-moving disaster, and less-than-average moisture is not only hard to show in a single image, but it’s also kind of boring compared with the drama of the flood.

One drought, though, has scratched its way into the visual memory of most Americans. The Dust Bowl remains, as the National Drought Mitigation Center puts it, “the drought of record” in the United States. Four major drought events, combined with economic depression, drove farmers and farmworkers from the Plains states during the 1930s. Government relief programs used photographs of the environmental devastation and mass exodus to drum up continued support for their funding efforts. These pictures have also amplified memories of the Dust Bowl in comparison with other droughts. Officials sent photographers into the region in the mid-1930s with “shooting scripts,” which detailed the types of pictures they thought would most compellingly represent the dire situation.

Read: Letters from the Dust Bowl

The agencies needed dramatic, convincing pictures, but even at the height of the drought its effects didn’t translate easily into print. The photographer Arthur Rothstein, who took two of the most legible drought pictures from the era, was accused of directing or setting up his shots—allegations that challenge their documentary value. One editor, in a 1936 shooting script for Rothstein, admitted that he’d heard cattle had actually done pretty well over the winter and “that there are no ribs sticking out or no tongues parched and protruding.” The drought was bad, but it didn’t look that bad. No couches were floating down the street, after all.

Flood images and stories not only are passed down through generations; they also become foundational myths. Civilizations prospered in the rich aftermath of flooding along the banks of the Nile, the Yellow River, and the Mississippi. Drought, conversely, pushed society away. It is linked with the decline and even collapse of societies such as the Maya and the people of Angkor. Disappearance is the deepest kind of oblivion.

Paleoclimatologists can see the impact of ancient drought periods in tree rings, bands of growth narrowing with the stress of limited water. The effects of drought, especially wildfire, can be read in the sediment of ancient lake beds. But these signs are visible only with instruments and training. Instead, in California we have flashing highway signs during times of drought that warn residents about water usage, as if drought were nothing more than a traffic jam or a construction delay.

Lucas Bessire: The next disaster coming to the Great Plains

What if Americans and people around the world memorialized drought in the same way we record high-water marks? Those indelible histories engraved on buildings and bridges remind us that water is powerful and only imperfectly predictable. As models based on old climate data become obsolete, we need to be more alert to how the landscape will reflect the changes we’ve wrought.

The sere landscape demands to be seen and not only when it’s already a problem. Floating low-water monuments in reservoirs and lakes might serve as one reminder; when people understand just how far out the shoreline can recede, they might better understand the urgency of preventing the climate from getting hotter and drier. The designers of mapping apps and navigation systems could give us a readily accessible reminder by enabling another satellite layer that portrays the landscape under extreme conditions, so that even when we’re driving through spring-green hillsides, we can see what they once were—and will be again when drought returns. Popular smartphone services, such as iNaturalist and Apple’s Visual Look Up, use image recognition to identify plants and animals. What if these also came with warnings about how species will suffer under prolonged drought conditions?

The history of drought won’t stay submerged. We may need to see the impacts of our water use, both private and industrial, in order to remember the dry times all the time. Otherwise we might come to wish that Steinbeck’s statement—“It was always that way”—was a promise, since it implies at least occasional relief from the long-running, slow-moving disaster of drought.