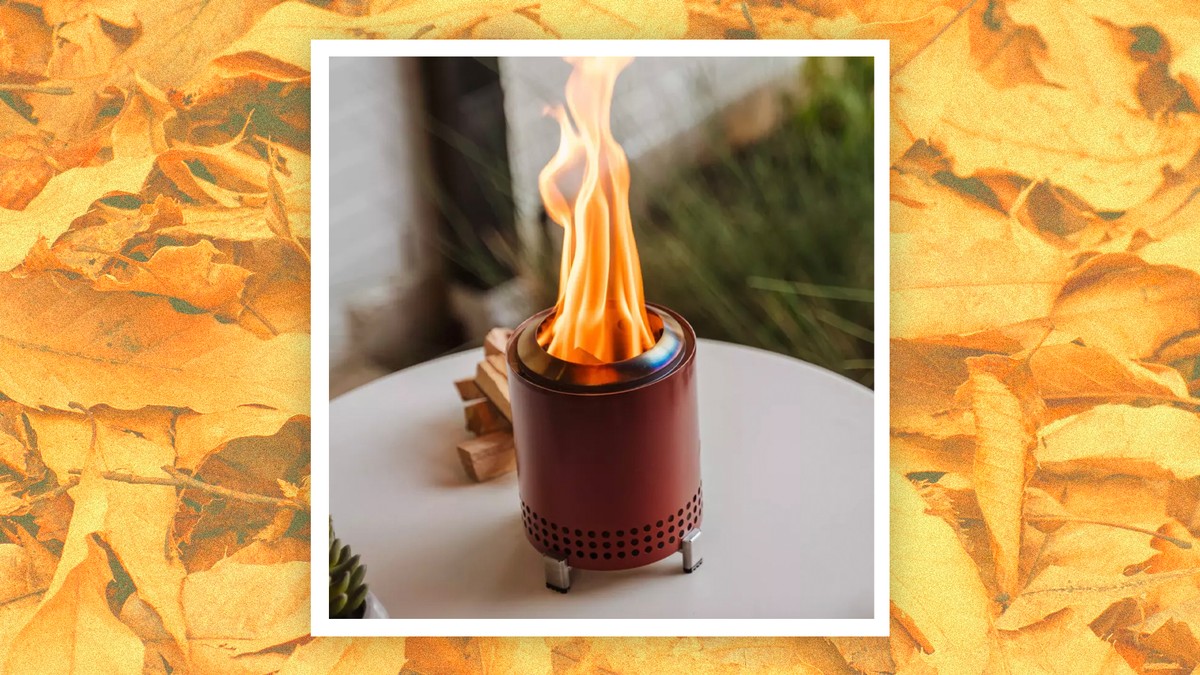 Every fall, I ask myself: WWWHD? (what would Werner Herzog do?), and the answer is always: hover over more open flames. Fall is the season for ruminating over cauldrons, pondering our orbs, and gathering your coven around fire pits with hot apple cider. All of these activities are well within possibility for me, but some are harder to do with a limited amount of space and money.  Especially with ye old fire pit. I love the outdoors, but I’m far from outdoorsy. This is a safe space, so I know I can be honest when I admit that I want all of the ambiance of a fire pit, and none of the complicated, clunky assembly.

If you’re sussing out the fire pit market, you’ve undoubtedly come across Solo Stove. The USA-made fire pit brand has gained a loyal following of both legit Ron Swansons and outdoorsy rubes like myself thanks to its slick and smokeless fire pits. I repeat: smokeless. These babies use unique 360-degree airflow flow technology to burn cleaner, longer, and with minimal smoke. So when I heard Solo Stove was about to launch a veritable miniature version of its cult-fave fire pits, I thought, This could be it: my ticket to a fall filled with roasted marshmallows and Rocky Mountain ambiance—all without leaving Brooklyn.

Dubbed “the Mesa,” the small fire pit promises to offer the same smokeless experience as its big boi pits, but on a hobbit-sized scale, so I gave it the ultimate test: provide ambiance at a very important 40th wedding anniversary party of… another person’s parents. Would it provide actual, substantial warmth? Would set-up be truly idiot-proof? Only time, and maybe some gasoline, would tell.

My Mesa arrived quickly and well-packaged and was way more lightweight than I expected. It comes in six earthy colorways, but I was stoked on the mulberry red because it’s such a jolly/horny shade.

I unboxed it a little to touch the matte stainless steel, and thought, huh. Cool. That was the extent of my prep.

The following Sunday, I grabbed some booze and my Mesa (which fit perfectly in a tote bag), dipped to my friend’s parents’ anniversary party in Bed-Stuy—congrats, Susan and Daniel—and was very pleased to have such a clutch party trick up my sleeve. I mean, these folks are a very cool couple; the dad is a chill Descartes professor and the mom is a social worker who later explained to me why she has beef with the Girl Scouts (she’s “not a fan of the military industrial complex.” Swoon.) Anyways. It felt like a nice Well-Adjusted Adult Achievement to pull up with a swish tabletop fire pit to celebrate the couple, and the next time I need a housewarming or wedding present that’s actually interesting, I’ll definitely consider copping another Mesa. Flames = better representation of love than a toaster.

We didn’t light-up the Mesa immediately, as schmoozing was in order. But a few hours later, my friend and I were buzzed enough to say, “Wanna chop some logs?”

My friend’s mom responsibly took the reins on ax duty. and started chopping American Girl Doll-sized pieces of kindling. Meanwhile, my bud and I unboxed the fire pit. I pulled up this YouTube video to make sure we didn’t miss anything, but set-up took five minutes, if that. I’ve honestly had a harder time assembling most Tupperware than this fire pit.

Given that we had no trusty fire-starting pellets, it took a few tries for us drunkards n00bs to light the kindling that Mother had so graciously chopped. But once it was lit, it was as if a dial had turned-up the ambiance of the patio to 11.

The flame can get over a foot tall if you feed it enough kindling, but we kept the pit at a low burn because we were under a tent. Occasionally, someone would throw a napkin in for kicks (it was me; I’m sorry), and in those moments it would flare-up gradually—but even then, the flame stayed well-contained and very skinny.

Again, we were very under-prepared for fire pit time, but that was semi-on purpose; I wanted to push the limits of Solo Stove’s easy-to-use claims, and I was pretty damn pleased. Being outdoor novices didn’t stop us from having a ball by burning debris and trying to light cigarettes in the flames, which cycle through holes in the inside in a hypotonic circular motion, reducing the amount of smoke. And while the upper portion of the pit became very hot, the lower portion and the stand were almost cool to the touch. We were entertained for hours, literally pushing the boundaries of the old “don’t play with fire” adage, and clean-up (which I… wasn’t there for, sorry bud) with a pit that small is like dumping an ashtray. Easy street.

As much as I love chopping kindling, I’m going to use a few pieces (tumbleweeds?) of these best-selling fire starting pellets from Amazon next time. Some extendable fire pit sticks for roasting smores and salami would also be a nice addition; these prongs will stick their necks out 32 inches, so you don’t have to (no wonder they have a 4.6-star rating on Amazon from over 19,800 reviews):

I’ve always wanted to ascend to lumbersexual heights with my outdoor entertaining, but never had the confidence or the patience for true outdoorsy know-how. Solo Stove understands my earnest but lazy goblin soul, and has made a truly idiot-proof tabletop fire pit for us city folk—or anyone with a smaller outdoor space—who wants to bring the aroma and sounds of a crackling country fireplace to their own parties.

Oh, and hot tip: If you’ve been debating buying a fire pit, now is the time to smash that order button while Solo Stove is having its 30% off fall sale.