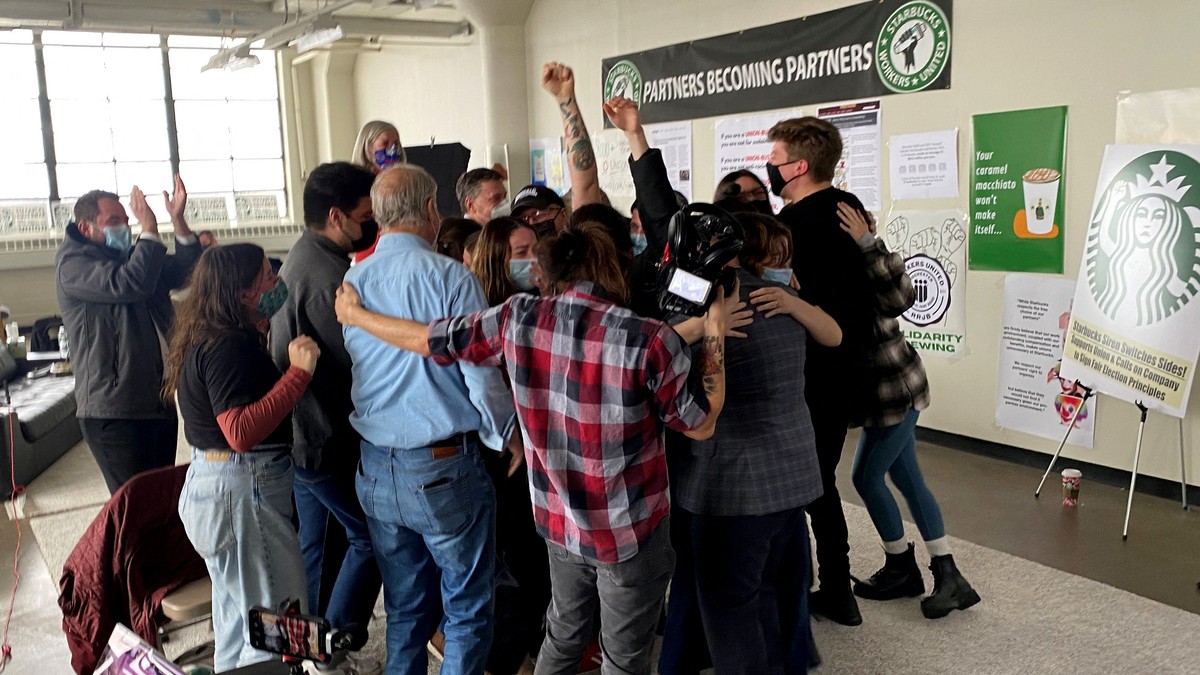 Baristas at 15 Starbucks stores around the United States filed for union elections Monday. This means that a localized campaign that started in three stores in Buffalo, New York, is now a nationwide movement that spans 54 stores in 19 states.

The campaign to unionize Starbucks are one of the most promising efforts to revitalize and rebuild a labor movement that has long been in decline, and transform the food service industry, which has long resisted unionization. The seeds for the campaign were planted last year in Buffalo, New York, where Starbucks workers at three coffeeshops voted to unionize and two became the first of the coffee giant’s 9,000 corporate-owned stores to vote to unionize in December.

That campaign has snowballed in spite of Starbucks’ fierce campaign to fend off the union drives, in large part experts say because organizing is worker-led rather than a top down initiative coming from unions. The efforts show the contagiousness of the unionization movement. When one group of workers show what is possible, others will follow.

“The strategy of bringing in top level executives failed, and they can’t be in all places at once anymore,” said Rebecca Givan, a professor of labor studies at Rutgers University. “That means they have to rely on local level managers to [union bust], and there are a few signs that local managers might not be interested in doing that. Managers may not want to spread propaganda and they may be supportive of the workers and in this job market, those managers can quit and get another job.”

John Logan, a labor studies professor at San Francisco State University, told Motherboard that the social atmosphere of Starbucks and absence of chronic surveillance, makes it an easier worksite to unionize than say an Amazon warehouse. “Starbucks workers have plenty of time to talk together and organize on the job, and Starbucks is losing control over it,” Logan said. “It’s spreading in a way that they’re not able to put the brakes on the number of new stores.”

“I think that Starbucks kind of turned out to be the perfect storm,” said Givan. “They have intentionally hired young workers and projected a progressive image so working at Starbucks would mean something different than working at McDonald’s or Amazon. Exposing how removed that image is from the reality of the work has agitated and angered a lot of workers.”

Jacob Fullerton, a worker at a unionizing Starbucks store in Everett, Washington that petitioned for an election on Monday, said in a statement, “We are joining the movement to unionize for a bevy of reasons, first and foremost of those is the desire for a meaningful voice in our workplace. The majority of Starbucks stores are staffed by people of color, women, and those in the LGBTQ+ community; true equality and representation for these groups should be the chief concern for a company that messages as socially progressive as Starbucks does. Unionization achieves that and therefore should be supported by the company.”

Logan, the labor studies expert, also noted Starbucks’ initial legal strategy of arguing that Starbucks workers should vote as entire regions rather than as individual stores would have made it “difficult” for unions to win elections. But the National Labor Relations Board sided with the union, and the store-by-store election model has proved advantageous for Workers United, the union representing Starbucks workers. (Starbucks stores usually employ around 30 workers.)

While the number of unionizing Starbucks workers is not enough to reverse declining union membership in the United States, Logan says, it is playing an important role in spreading excitement and enthusiasm that is needed to create support for the types of legal reforms that are needed to build back union density in the United States. “This is huge for generating excitement at Starbucks around the country, and there’s no reason to believe this wouldn’t spread beyond that to workers in food services. It’s important that they get victories, but I don’t think the numbers are crucial. You can only change the law if people know and care about the issues.”

“In absolute numbers, Starbucks is not huge yet,” Givan said, but noted that the influence of these union drives goes far beyond the number of workers involved in them. “Young workers everywhere see the success of Starbucks workers in Buffalo which crystallizes that there is an opportunity to organize. I think of it as parallel to something like organizing in digital media where the numbers are modest compared to larger declines in union membership, but the absolute numbers don’t capture the full extent of what’s going on.”

On Monday, Starbucks workers also began contract negotiations for the first time at its unionized Elmwood store in Buffalo. Meanwhile, three additional Starbucks locations in Buffalo began voting in union elections at their stores on Monday.

Motherboard reached out to Starbucks for comment on whether it intended to bargain in good faith with workers, and was directed to a letter published in December on Starbucks’ website from Rosann Williams, the president of Starbucks North America.

“From the beginning, we’ve been clear in our belief that we do not want a union between us as partners, and that conviction has not changed,” Williams wrote. “However, we have also said that we respect the legal process. This means we will bargain in good faith with the union that represents partners in the one Buffalo store that voted in favor of union representation. Our hope is that union representatives also come to the table with mutual good faith, respect and positive intent.