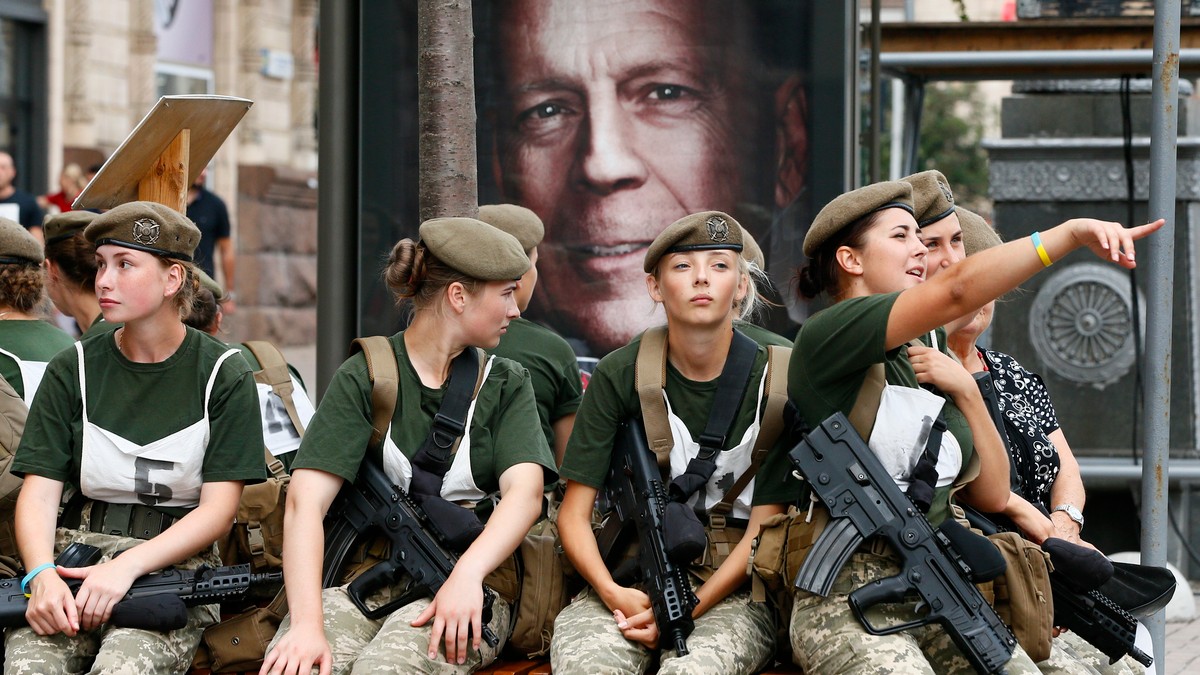 Kristina had been living with her family in Italy for over a decade, working at the supermarket and singing at weddings in her spare time. But as military tensions rose a year ago along Ukraine’s eastern border, the 29-year-old Ukrainian woman returned to her country of birth to become a soldier.

She was fully aware of the danger she was getting herself into—since 2014, Ukraine has been the target of Russian-backed aggression in its eastern region of Donbas.

“The risk of saying goodbye to life is always there. We are not afraid of death; we are afraid to be slaves,” Kristina, who withheld her last name and location due to safety concerns, told VICE World News. “I will be on my land to the last.”

The decisions of Ukrainian women like Kristina to pick up arms to defend the country from Russian threats helped give rise to a military that has a higher share of women than most other armed forces in the world.

At the beginning of 2021, there were around 57,000 women in Ukraine’s armed forces, comprising 22.8 percent of the total, according to the ministry of defence. This figure is far higher than those of its neighbors Poland (7.5 percent) and Russia (4 percent), as well as the United States (16 percent) and Germany (12 percent). Only a handful of countries that conscript men and women on equal conditions, such as Norway and Sweden, have a comparable or higher level of female representation in their military.

As Russia continues its attacks on Ukraine, the responsibility of defending the country has fallen in part to the growing ranks of formal—and informal—female fighters. Among them have been a 79-year-old woman who recently learned how to fire a gun, former beauty queen Anastasiia Lenna, who represented Ukraine at the 2015 Miss Grand International pageant—and Kristina, the former wedding singer.

Despite being the only woman in her mountain combat unit, Kristina said that she does “everything on an equal footing with men.”

“They treat me first and foremost as a military woman, as a friend, as a sister,” she said.

Their role in Ukraine’s resistance can be traced to the Maidan protests in 2013, where a wave of mass demonstrations resulted in the ousting of Ukraine’s Russia-aligned president Viktor Yanukovych.

During the protests, which were vehemently opposed by the Russian government, women helped out in makeshift hospitals and joined self-defense units. That year, the military began to see a major uptick in the number of women joining—a figure that more than doubled in the six years to 2020.

“[These women] reveal that Ukrainian society will do everything to protect its freedom and sovereignty,” said Olesya Khromeychuk, the director of Ukrainian Institute London, a charity organization and center for educational activities related to Ukraine.

When Moscow annexed Crimea and backed separatists in Ukraine’s eastern Donbas region in 2014, many women simply replicated the roles they were engaged in during the protests—but this time in the armed forces, Khromeychuk said.

Initially, women were not allowed to take up combat positions, though some still found a way around legal restrictions. Over the years, reports have emerged of gender-based discrimination, as well as allegations of sexual harassment in the army.

But in 2018, the passage of a military gender equality law granted women equal rights as men in the army, giving rise to a profound societal shift, Khromeychuk noted.

“Servicewomen who joined the war effort did much to challenge the traditional perceptions of gender roles prevalent in Ukraine,” said Khromeychuk. “Servicewomen started to be perceived not as women first and foremost but as professionals who chose to join the military.”

This number could rise further in the wake of the invasion. As of last December, an update to Ministry of Defence regulations required women between 18 and 60 deemed fit for military service to register with the armed forces so that they could be mobilized during war.

“Considering more than 122,000 Russian troops are at our borders, the decision seems logical, timely, and sensible,” Oleksandra Ustinova, a member of the Ukrainian parliament, told reporters at that time.

In February, Ukrainian authorities announced that they were looking to recruit over 1.5 million civilians into the Territorial Defense Force, a military reserve branch comprising civilian reservists. Last year, Yevheniia Chekh decided it was her national duty to join such a unit.

A year ago, she was a beautician living in the Poltava region in central Ukraine. Now, she’s also a member of her local reservist unit. Volunteers like Chekh are known as “weekend warriors,” people who hold civilian jobs but take part in military drills and who can be called upon to support the armed forces in resisting invaders.

Prior to the invasion, Chekh had been spending her Saturdays at military exercises, and with no prior sporting history, her experience has been an arduous one. But the 46-year-old told VICE World News that she had “no fears and hesitations” about going into combat.

“Now all of Ukraine and Ukrainians are at war with the Russian army,” she said. “I feel determined and confident, without fear and pity for the enemy.”

“I have a family. I am worried not only about them, but also about all citizens.”

But the fact remains that recruits like Chekh, those with no previous military experience, are an imperfect solution to the current crisis. In a video that went viral over the weekend, former Ukrainian president Petro Poroshenko speaks in a live television interview while behind him, a soldier accidentally drops his rifle magazine. The soldier’s awkward mistake became an instant meme, sparking laughter and then sympathy.

While it’s unclear if the man was a professional soldier or new recruit, commenters took him to represent the many Ukrainian civilians, including women, who have assumed military duties amid a chaotic Russian invasion.

“The fact that civilians feel that they have little option but to take up arms is evidence of the international community’s failure to protect Ukraine against Russia’s attack adequately,” Khromeychuk said.