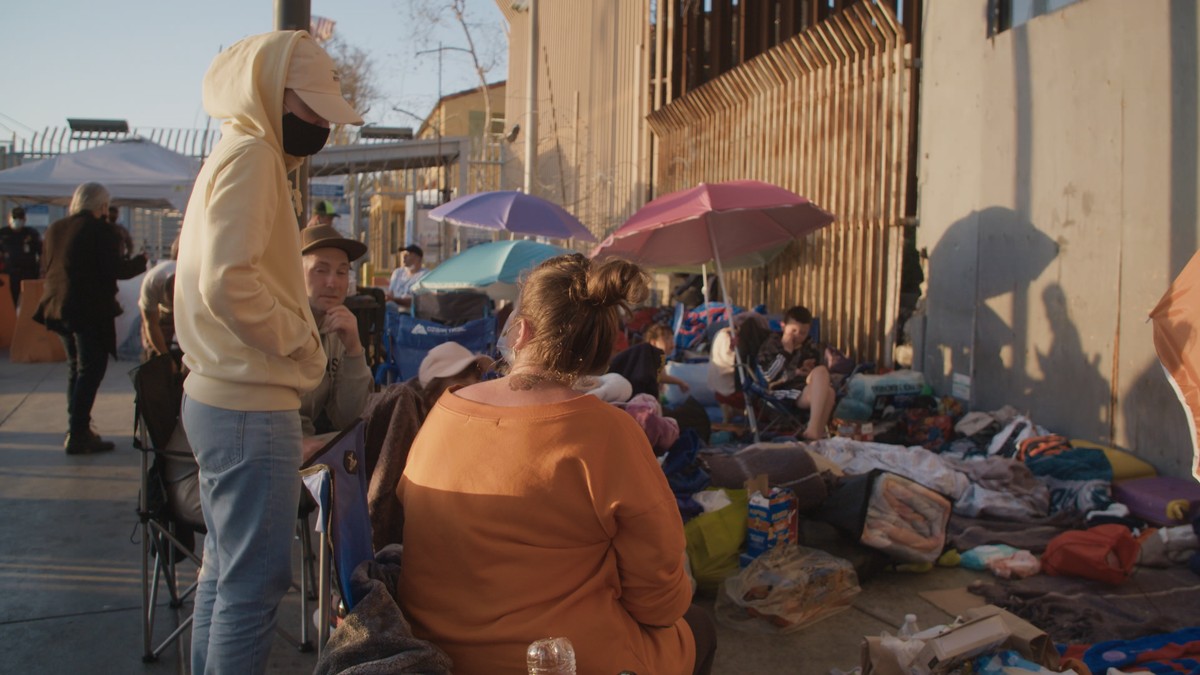 TIJUANA, Mexico — A group of Russian citizens who fled their country after the invasion of Ukraine and spent a week camped out at the U.S.-Mexico border was quietly admitted to the U.S. in a secret deal with Mexican officials, VICE World News has learned.

The group of 35 asylum seekers was whisked away in the predawn hours of March 20 and driven to a part of the border where they wouldn’t be seen: a checkpoint that has been closed to the public for several months.

There, under cover of night, Mexican immigration officers handed the Russians over to U.S. Customs and Border Protection.

Two days prior, the Russians had received an offer from a Russian-speaking man who introduced himself as an American diplomat: They would be taken across the border, but only if they broke up their growing encampment on the busy pedestrian crossing between Tijuana and San Diego.

The secret agreement, brokered by the U.S. Consulate in Tijuana and executed in conjunction with Mexican officials at the federal and state levels, bypassed Title 42, the controversial pandemic-era measure that allows U.S. border authorities to expel or deny entry to asylum seekers without hearing their claims. The policy has left tens of thousands of migrants stranded on the Mexican side of the border.

Captured by VICE World News cameras and independently confirmed by three sources, including a Mexican federal official, the incident reveals how asylum policy under Title 42 is not a system of predictable or transparent rules but rather one of arbitrary special exemptions and backdoor deals.

It had been a dreadful week for the Russian asylum seekers, most of whom were active in the opposition to the war in Ukraine and fled political persecution under President Vladimir Putin. Waiting for days to enter the U.S. to begin their proceedings for asylum, children and adults—including a woman in her seventh week of pregnancy with a history of miscarriage—had slept on the concrete sidewalk on donated folding chairs and blankets, a few feet away from the concertina wire marking the border and watched by the constant stream of people who cross into San Diego on foot every day.

Although most were skeptical that they would actually be taken across the border, they were so eager to leave the conditions of the encampment that they warily agreed to the deal.

Irina, a math teacher from Moscow who was arrested for protesting the war and spent several days at the encampment, said that although she was grateful for the opportunity to seek asylum in the U.S., she was also surprised by the arbitrary and convoluted nature of the process she and the group encountered.

Title 42 went into effect in March 2020 as the final blow in a long line of Trump-administration policies aimed at shutting down the asylum system on the southern border. Although it was ostensibly introduced in response to the Covid pandemic, Title 42’s grounding in public health has always been shaky. Nevertheless, the Biden administration has kept the rule in place, reportedly to deter a “mass migration event.”

The vast majority of the almost 2 million expulsions executed under the measure have been migrants from Central America, Mexico, Haiti, and Brazil, and most recently Colombia. Other asylum seekers from the Global South are also subjected to the policy, and are also turned away at ports of entry in smaller numbers.

The recent arrival of Ukrainian and Russian war refugees has brought new attention to Title 42. A group of at least a dozen Ukrainians who gathered in Tijuana in early March, days before the Russians began to arrive, was initially denied entry under the policy but then later admitted and processed under unspecified exemptions. In the following days, after the federal government officially reminded CBP officers that they are authorized to apply case-by-case humanitarian exceptions, Ukrainian asylum seekers began to cross easily as soon as they arrived at ports of entry.

But the initial case-by-case exemptions offered to Ukranians were not extended to Russians, even those fleeing political persecution for their opposition to the war or connections to Ukraine. As a result, Russians began accumulating at the San Ysidro Port of Entry, forming an encampment that grew to include at least 36 people, among them several children and teenagers.

“I got here on Monday [April 21], and Mexican authorities did their best to help us, offering warm clothes, food, water, hot tea, and power banks,” said Mikhail Shliachkov from northern Moscow, who spoke to VICE World News while still at the camp. “By Tuesday, they started asking us to go to a shelter. But we don’t want to leave the street because we are afraid. Now, they ask us every day to go somewhere else.”

By Wednesday, the situation had worn down the patience of Mexican authorities, and Tijuana’s office for migration services handed out flyers in Russian to the group cautioning that if the migrants stayed for longer, “the United States may decide to close this border crossing for internal security reasons, which will seriously affect binational residents.” Despite the warning, the Russians refused to leave.

During the time the Russians were camped out on the border, VICE World News observed families fleeing violence in Southern Mexico and individuals escaping political persecution in Cuba request asylum at the port of entry. They were consistently turned away by U.S. authorities and then ordered away from the checkpoint by Mexican police. Meanwhile, Ukrainians were granted quick access to the U.S. side.

By the end of the week, the U.S. consul in Tijuana, Thomas E. Reott, held meetings with representatives of the Russian encampment in the presence of Mexican officials from the Baja California governor’s office. On Friday, the consul told representatives of the group, speaking in Russian, that they would be allowed to cross into the U.S. within three or four days if they vacated the encampment, according to a Mexican federal official with knowledge of the agreement and two people familiar with the meetings.

But the Russians refused, saying three or four days seemed too long.

It wasn’t until Saturday, when Baja California government officials informed the group that the crossing would happen at 5 a.m. the following morning, that they accepted the offer.

Once the terms were accepted, the Russians packed up their belongings and were transported to a hotel in official Mexican immigration vehicles. The following morning, as promised, those same vehicles arrived at 5:30 a.m., picked up the group at the hotel, and transported it directly to the pedestrian border checkpoint known on the Mexico side as El Chaparral. The crossing was officially closed to the public after a large encampment of Central Americans, Haitians, and other migrants formed there last year; immigration officials currently use it solely to process deportees returned to Mexico from the United States.

An unknown number of additional Russian citizens who were not part of the encampment but are believed to have been staying in hotels in Tijuana were also driven along with the encampment group to El Chaparral early Sunday and crossed into the United States.

Once on the U.S. side, the group was processed by CBP officers and remained under the agency’s custody for two days. During detention, some of the Russians shared cells with many of the Ukranians they had witnessed swiftly crossing into San Diego during the days of their encampment. By Tuesday morning, the families of the group were released in the San Diego area, all with notices to appear before immigration judges in the following months. The single adults, in turn, were transferred to immigration detention centers, mainly in states in the Southern U.S. It’s unclear when they will be released.

In a statement to VICE World News, the State Department did not comment specifically on the secret agreement negotiated by its Consul in Tijuana to allow in the Russians, but it said that the U.S. and Mexico “cooperate closely on a wide range of issues, including migration” and that the countries’ close relationship enables “dialogue to address challenges that impact both of our countries.”

A spokesperson with the Department of Homeland Security said the department continues to operate Title 42 to the greatest extent possible, granting “exceptions to particularly vulnerable individuals of all nationalities for humanitarian reasons on a case-by-case basis,” but it did not clarify what considerations were applied to exempt the group from the policy.

The opaque agreement offered to the group of Russians is highly unusual. Lawyers and advocates who have worked with asylum seekers in Tijuana for years say they are not aware of any similar deals in the past, nor are they aware of other instances in which specific groups of migrants have been transported to El Chaparral to facilitate a surreptitious crossing into the U.S.

At the end of March, the Biden administration is expected to consider whether to lift Title 42, in part due to litigation from the American Civil Liberties Union and other plaintiffs challenging the government’s expulsions of asylum seeking families with children. The federal government has already agreed to exempt from Title 42 unaccompanied minors showing up on the border, and more recently proposed an overhaul of the asylum system intended to make it faster to process claimants.

Thousands of migrants have been stuck in Mexican border cities since at least 2016, when, in response to the arrival of large numbers of Haitians to Tijuana, the Obama administration began turning them away under a policy known as “metering” on the basis of limited processing capacity (a rationale that was later revealed to be misleading). Trump dramatically expanded metering and later implemented the Migrant Protection Protocols, otherwise known as Remain in Mexico, allowing migrants to begin asylum claims but forcing them to wait in Mexico while their cases played out.

Title 42 gave CBP close to unlimited power to turn away or expel asylum seekers with no due process, and the agency has proceeded with almost 2 million expulsions under the policy, according to government data. Advocates and migrants have been frustrated that it seems to have been the arrival of white refugees from Europe that brought political opposition to Title 42—including from leaders of the Democratic Party—to a new level.

“No one wants to see Ukrainian or Russian asylum seekers turned away; what we want is for Title 42 to be eliminated altogether so that everyone fleeing danger can get a fair hearing,” said Lee Gelernt, deputy director of the Immigrants’ Rights Project at the ACLU. “The availability of asylum hearings cannot turn on politics or arbitrary criteria.”

“It’s racism. Plain racism,” said Johnny, a Haitian migrant who’s been in Tijuana several months and protested Title 42 on the day marking the policy’s second anniversary—just one day after the Russians had been whisked into the United States. “The same thing happened on the [Polish] border, where white Ukrainians refugees were welcomed but not Black people fleeing the war. It’s the same old story,” he added.

Irina, the teacher from Moscow, was detained by CBP with her three young children and released into the U.S on Tuesday. They have to appear before an immigration judge in November. Her eldest daughter, who is 18, was separated from the family along with her boyfriend after crossing into the U.S. to be processed as single adults. They remain in detention.

After passing a COVID screening, the family went straight to the San Diego airport to catch a flight to Houston.

“For the next few years I’ll stay here. I can’t go back to Russia now. I am going to build my life here,” Irina said. “And my kids will grow up here. They probably won’t speak Russian, but they’ll speak English.”