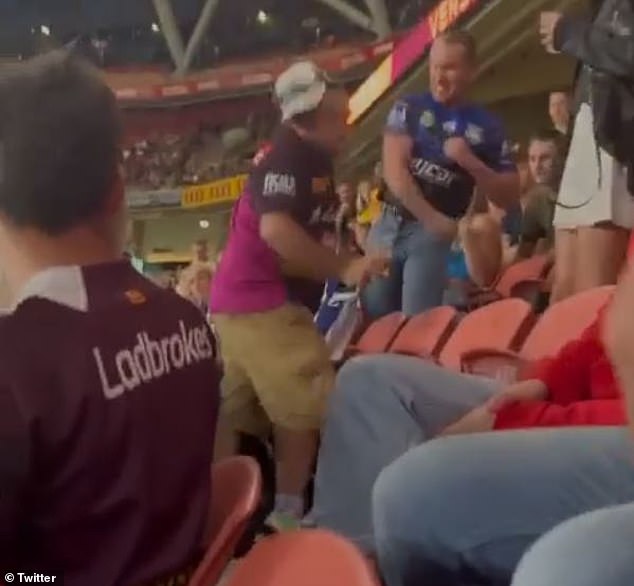 A fan at the Brisbane Broncos vs Canterbury Bulldogs Anzac round game has revealed what a spectator allegedly yelled during the moment of silence held before kickoff just seconds before he was bashed in the stands.

Two videos taken at Suncorp Stadium on Friday night show a fan in a Bulldogs jersey repeatedly punching the man, who was wearing a Broncos jersey, while other spectators look on.

Adding insult to injury, the man has now been fined $1654 for his trouble. The incident was caught on camera at the stadium and Queensland Police have fined the 45-year-old man who was bashed $827 fine for obstructing police and $827 for disorderly behaviour.

Queensland Police confirmed that ‘officers removed both men in the video from Suncorp Stadium following the incident on Friday night. At present no complaints of assault have been made.’

Spectator Geoff Redgrave said the man could clearly be heard yelling, ‘You better beat those Dogs tonight you c***s.’

‘It was quiet as when he yelled actually one of the quietest crowds I have heard during a minutes silence,’ Redgrave said.

‘Someone else yelled back at him shut up … I could hear it clear as, yeah no respect and an older guy from what I saw should have known better.’

A man claiming to have filmed one of the viral videos of the incident on his phone said on Facebook: ‘I was the one who took the video and he was literally the only person that shouted out, apart from that the whole stadium was respectful.’

An altercation broke out during the Brisbane Broncos vs Canterbury Bulldogs Anzac round game in Brisbane’s Suncorp Stadium last night. The fight allegedly began after a man was yelling during the pre-game moment of silence. Police say they were made aware of the incident, but no charges have been laid. DETAILS: http://9Soci.al/R0Hc50IQpxv #9News | Nightly at 6pm

An alternative view of the incident also showed a third man becoming involved in the brawl. Filmed from a higher tier, the footage shows an agitated man wearing a Broncos No.7 jersey accost the man who allegedly yelled during the minute’s silence after he had been punched twice by the Bulldogs supporter.

While the victim of the attack seemed dazed and uncertain of what was going on, the third man in yelled at him to leave and pointed toward the exit. It then escalated as the third man in slapped the already dazed man and tried to physically remove him from the stadium.

A woman standing right next to the incident appears to be shielding a younger man from the violence. There are several young women and children in close proximity.

Eventually, the person filming from above can be heard saying ‘oop here comes help’ and stadium staff move in to control the situation.

A witness who posted one of the videos on Twitter also tweeted in a separate post: ‘So the guy who yelled out during the moment of silence was a Broncos supporter and got absolutely DECKED by a dogs supporter.’

The footage shows the Bulldogs fan arguing with the man before hitting him in the face with his right hand, causing him to stumble backwards and sit on the edge of a seat.

The Broncos fan then gets up and is hit with another right hand to the face, making him fall forwards, at which point he’s then hit several more times by the Dogs fan.

He’s then pushed backwards by the Dogs fan and a third man in a Broncos jersey, falls back over the seats behind him and is yelled at by several other furious fans and repeatedly told to ‘p*** off’.

Several people at the game took to Twitter to complain that a fan or fans were yelling during the minute’s silence.

‘I hope they found that moron at Suncorp and kicked him out. How hard is it to be respectful?’ asked KC2022iseeyou.

‘There’s always 1 d***head who yells out during the minutes silence,’ wrote G’sHPM.

‘Someone find those yobbos yelling during the silence and boot them out for good. Disgraceful,’ added The NRL Roast.

Failing to observe the minute’s silence to commemorate the sacrifices of Australian diggers is, needless to say, highly offensive.

The tradition of remembering the fallen with a period of silence was first suggested by Melbourne World War One veteran and journalist Edward George Honey, who put the idea forward while living in London in 1919.

It’s now a feature of all major sporting clashes held on or around Anzac Day in Australia and is usually solemnly observed.