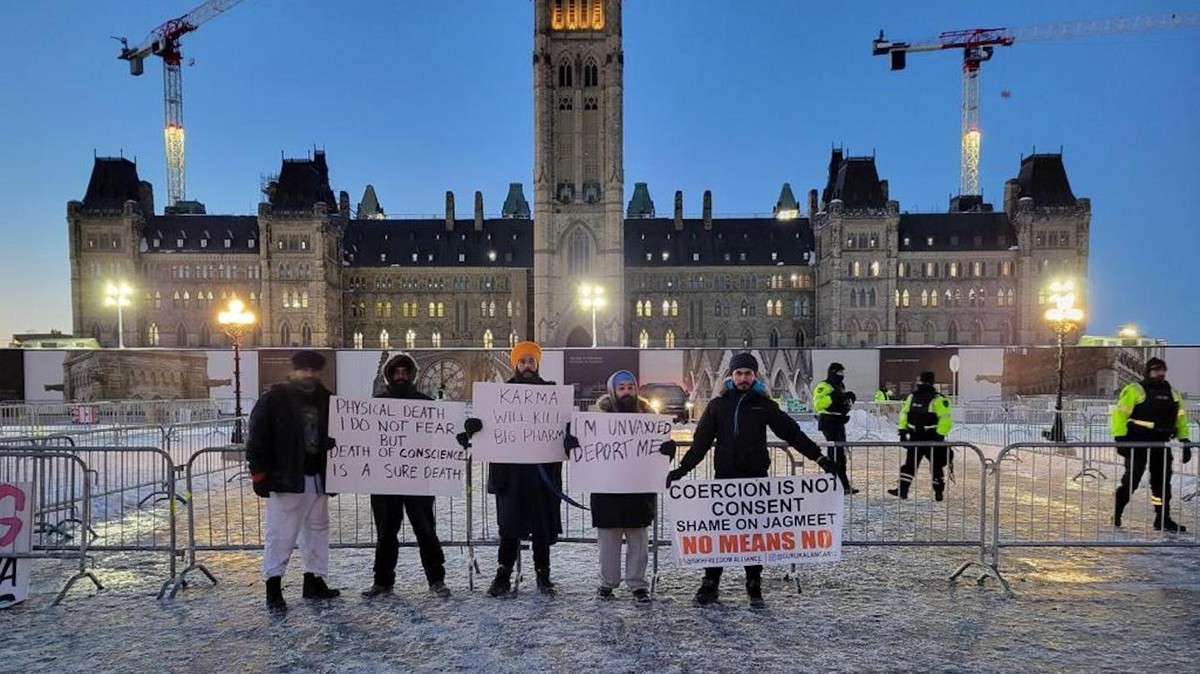 Before heading out, Jaskanwal Singh prepares samosas, the quintessential South Asian spicy puff pastry, and chai at his home in Canada. He loads them up in his car and joins a group of 14 Sikh Canadians like him in freezing sub-zero temperatures to serve free hot food to the anti-vax “freedom convoy” in Toronto.

“These samosas have become the food of the revolution,” Jaskanwal told VICE World News. On Instagram, he posts photos of what looks like a revolution—him holding the Sikh and Canadian flags—and poetry talking about “staring down tyranny.”

The “freedom convoy” started three weeks ago as a response to Canada’s federal vaccine mandate for truckers crossing into the U.S. from Canada. In fact, 90 percent of truckers are vaccinated. The convoy quickly snowballed into a movement about all vaccine regulations and a number of other complaints, including demands that the government resign.

Canada’s 500,000 Sikhs make up only 1.4 percent of the country’s 38.3 million population but about half of them are truckers. Manan Gupta, who runs Road Today, Canada’s magazine for South Asian truckers, told The Quint that even though some 20 percent of truckers in Canada are South Asians, very few of them are at the protests. In fact, most Canadian residents do not support the convoy, and are even counter-protesting in some places.

While most Sikh Canadians—including Sikh truckers—have distanced themselves from the truckers in the freedom convoy, VICE World News spoke to a few from the community who are supporting the movement, despite a track record of hate crimes against Sikhs by far-right activists, who are now leading the convoy. Protesting Sikhs say they’re taking part in the convoy because of their lack of faith in COVID-19 vaccines and pandemic restrictions.

“We’re finally here to stand up for our rights,” Jaskanwal, the 32-year-old second-generation Sikh Canadian said. “It feels wonderful.”

At the Toronto protest, Jaskanwal and his friends hand out samosas and chai to the protesters from a table arrayed with anti-vax signs. They call themselves Guru Ka Langar, a name borrowed from a traditional community service that is a cornerstone of the Sikh faith.

On Monday, Canadian Prime Minister Justin Trudeau invoked the Emergencies Act, for the first time in the country’s history, to handle the protest. “It is no longer a lawful protest at a disagreement over government policy. It is now an illegal occupation. It’s time for people to go home,” he said at a media conference.

The Anti-Hate Network, a Canadian watchdog, pointed out how the crowdfunded protest, which has raised millions, is being backed by prominent people from the far-right.

On Jan. 30, as the convoy marched towards the Canadian capital Ottawa’s Parliament Hill, a few protesters were seen waving flags bearing Nazi symbols and the Confederate flag. Patrick King, who has a history of posting white supremacist and anti-semitic content, is one of the convoy’s main organizers.

But for Jaskanwal, the problematic events are background noise.

“This is a deliberate attempt to create a perception that we don’t know what we’re doing and that we’ve ruined society,” he said, adding that the problematic visuals like the Nazi flags were a “plant.”

Jaskanwal said anti-vaxxers have been unfairly labelled as fringe and extremists “that needed to be segregated and shunned from society.”

“[We are] about making free choices, and freeing ourselves from coercion so that we’re not scared of losing our jobs.” The issue is not just about being anti-vaccine, he added, saying vaccine mandates have “divided” the Canadian society between the vaxxed and unvaxxed.

Last week, Jagmeet Singh, a Sikh and leader of Canada’s socialist party the New Democratic Party, called for action against the protesters and said their intention is to “overthrow the government.”

But Kuljeet Singh, a second-generation Sikh-Canadian studying medicine in Toronto, defended the “freedom convoy” and told VICE World News that leaders like Jagmeet do not represent them all.

“This movement is people-first; it’s socialism, about the workers being treated unfairly,” said Kuljeet. “These people here are the very fabric of our nation.”

Kuljeet added that unlike the scenes from Jan. 30, he’s yet to see any aggression at the protest. “I’ve been hugged in the last three weeks more than I’ve ever been in the last 34 years of my life.”

The participation of Sikhs in the convoy has aroused the curiosity of many, especially with Canada’s track record of hate crimes against minorities including Sikhs by far-right activists, who are now leading the convoy. On Monday, Fox News presenter Tucker Carlson, known for his anti-immigration stance and COVID-19 conspiracy theories, did a segment that featured Sikhs at the convoy.

Another point of curiosity also stems from the comparisons being made between the “freedom convoy” and the global farmers’ protest that launched in India in August 2020. Those protests were led by mostly Sikh farmers against controversial farming laws that would leave them at the mercy of big businesses.

Hundreds of thousands of Sikh farmers in their tractors camped outside the Indian capital Delhi for nearly two years until the Indian government repealed the laws in November.

In Canada, the scenes of the trucks blockading the Canadian borders bear some resemblance to the tractors used by Indian farmers.

And just like the farmers in India, who offered prayers and did sewa (community service that is part of the Sikh faith) before setting out, Kuljeet, the medical student, and his friends, offered prayers before joining the convoy. “We prayed that the truckers are victorious as well,” he said.

Sandhu said that comparisons of the two events are lazy. “In India, the farmer’s protest was made up of only farmers, while truckers are not at the forefront of the “freedom convoy’. In fact, trucker associations have denounced it saying trucker issues have been hijacked,” he said.  Additionally, the “freedom convoy” is represented by fringe figures such as Tamara Lich and received support from prominent American right-wing figures, such as Carlson and Florida GOP Gov. Ron DeSantis.

Kuljeet joined the protest because of his anti-vaccination stance. But his motivation also comes from his Sikh heritage, historically known to be warriors. “We Sikhs take great pride in the history of our gurus, warrior-hood and standing against what’s wrong. We put on our shields, pick up our swords, and run forward. And we fight for others too,” he said.

Jaskanwal and Kuljeet paint a picture of revelry at the protest. There are reports of protesters firing up the barbecue grill, setting up bouncy castles for kids, and some even playing hockey. “We see so much love,” said Kuljeet. He recounted his first day when he met protesters from the Canadian province Quebec, who reached out to the Sikh protesters saying, “The warriors are here.”

Jaskanwal said he has met many South Asians at the protest.

Gagan Singh, the spokesperson for the United Truckers Association in British Columbia, told a news outlet that the “freedom convoy” doesn’t figure among key issues for truckers, unlike safety and pay structure. Kulpreet Singh, a resident of British Columbia and the founder of the South Asian Mental Health Alliance, opened a fundraiser to support “Canada’s real, struggling truckers” and has been tweeting about actual truckers getting impacted by the blockades. “Tell me again how the convoy cares about the truckers?” he tweeted.

Sandhu expresses concerns that “freedom convoy” Sikhs are being used as “tokens” to project an image of diversity. “They’re being used as a PR shield by people who have historically not spoken in favour of Sikhs, directly or indirectly,” he said.

He warns his community members: “Be careful of what their real intentions are.”