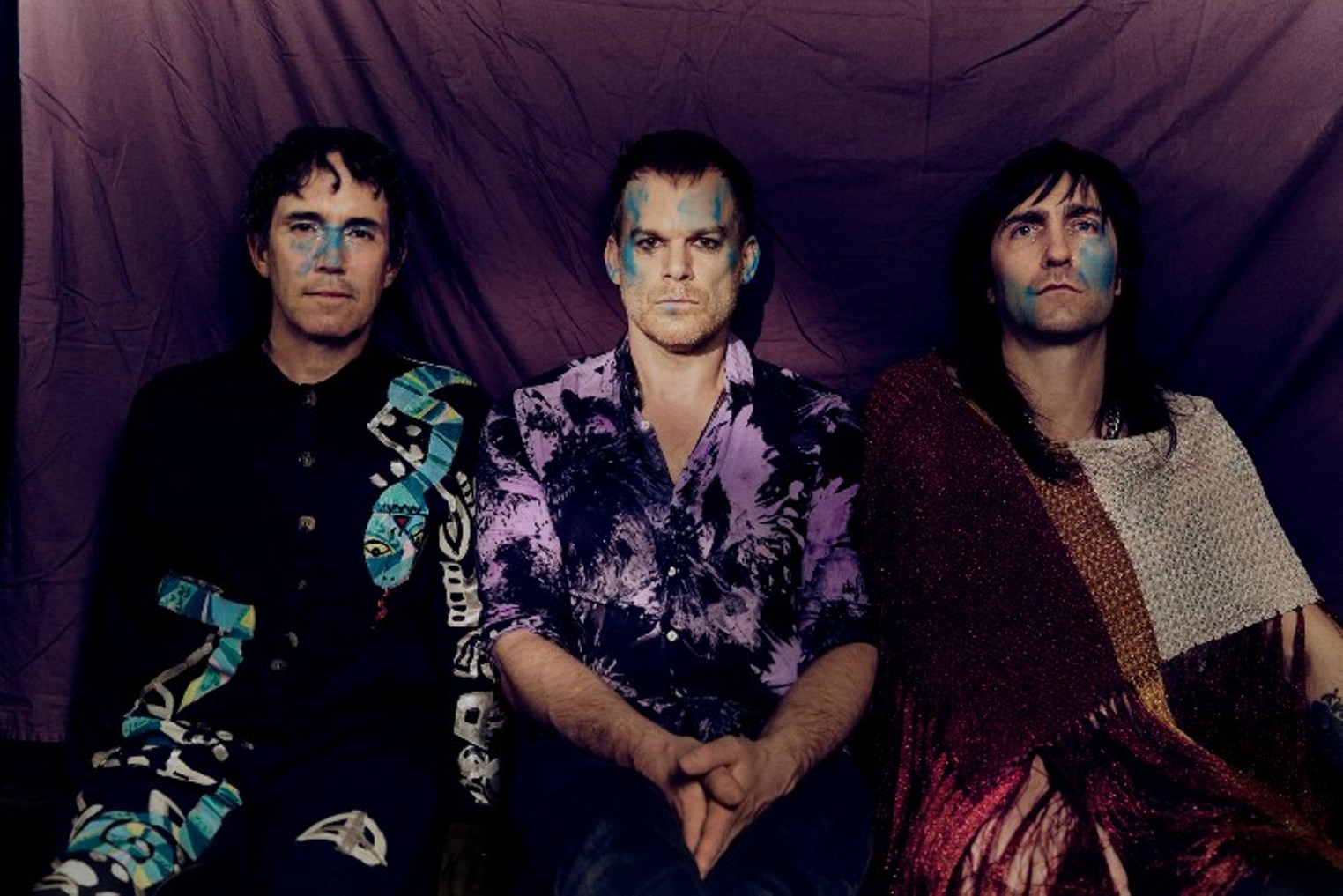 Michael C. Hall is a member of the new supergroup Princess Goes To The Butterfly Museum, so there he suddenly was in our Zoom chat. It doesn’t matter if you think you’re the second coming of Lester Bangs, it’s unnerving when “Dexter” himself is peering at you through the thin veil and dubious safety of the computer screen. Hall is joined by bandmates Peter Yanowitz and Matt Katz-Bohen for our discussion of the group’s music and live show, all headed for the Secret Group on Sunday, April 17.

The trio is so engaged by the music it’s doing that thoughts of everyone’s favorite serial killer quickly dissipate, so much so that the one or two Dexter questions the band’s publicists allow during these interviews never materialize. The focus is squarely on the critically-acclaimed music they’re producing,  described as “a swirl of glam, experimental, ambient” with a synth-heavy edge. One thing we note is there’s a lot of it already, nearly two dozen songs over a pair of releases from the last two years including a self-titled album and their latest offering, Thanks For Coming.

“We have a whole bunch of different ways that we write songs together. Sometimes we work things out in our studios and then other times one of us will send a song idea to the other two and then they’ll sort of build on it, we’ll all build on it together,” said Katz-Bohen, the band’s keyboardist/guitarist. “We’re always working on new material so we have an album basically completed and finished and ready to go, ready to be released to the world, and then we have a whole bunch of other various songs in various stages of completion.”

The band’s prolific tendencies might come from all the work they’ve put in over the years at their respective artistic pursuits. Katz-Bohen has been a member of Blondie since 2008 and has worked with everyone from Cyndi Lauper to Boy George and the cast of RuPaul’s Drag Race as a producer. Yanowitz, the band’s drummer, was a founding member of The Wallflowers and the early 2000s indie rock group Morningwood. He’s collaborated with diverse acts like Natalie Merchant, Yoko Ono, Andrew W.K. and the late poet Allen Ginsberg. Hall is an awards-nominated actor known for his roles in Dexter and Six Feet Under, but he’s also an accomplished vocalist and Broadway veteran with leading roles in Chicago, Cabaret and Hedwig and the Angry Inch.

They met years ago on that Broadway production and struck a friendship over music. When it was time to create their own they chose to do so as a trio. We asked about their favorite all-time music trios and whether there’s something special about the power of three.

“Yeah, three’s a really beautiful number. I think this is my first trio that I’ve ever been in, there’s always like four or five or six people in the band. It’s such a nice number because there’s never a tie in decision making, there’s always an odd person out. We’re usually always pretty in sync and all three agree on most everything,” said Yanowitz.

“My mind initially went to the Minuteman,” he added. “I don’t know if you remember them from San Pedro in California but they’re an incredible punk band where every member was so strong and brought so much to the table and they just didn’t need anything else. In the beginning maybe we assumed we’d eventually add more people and it felt like that was unnecessary after awhile. And the more we’ve played live, it’s clearly unnecessary.

“It’s great to keep it so compact. Bands are intense little creative units so it’s great that we have one that can be maintained so simply,” Yanowitz said.

“Yeah, it’s funny, I don’t usually think about trios but just off the top of my head – Nirvana,” Katz-Bohen added. “The xx, one of our favorite bands. Yeah Yeah Yeahs, another New York trio. Muse. And all these bands, they all are kind of perfect in their sound and it’s not like they’re missing something like, ‘Aw, I wish they had a saxophone player’ – although, I wouldn’t be averse to adding a saxophone player at some point, maybe for a song or two.”

Hall mentioned Rush and even flashed devil’s horns, the universal symbol of rock, which drew smiles and strong agreement from his bandmates that indeed Rush deserved to be mentioned in any list of influential and favored trios. If PGTTBM has designs on someday becoming an arena act like Rush, they’re content taking their time getting there. We wonder what it’s been like for these three seasoned artists to be playing small rooms on their first-ever headlining U.S. tour.

“It’s felt good,” Hall said. “I think it’s been important for us never to be in a rush, you know, let it grow organically. I suppose we’re at a point where we could arguably play bigger rooms and eventually will but we’re just trying to let it grow organically and not unnecessarily press it to expand or get bigger just for the sake of it. But I do think in time we’ll probably play bigger places. “

Presently, they’re playing different places all the time, which Hall admits is a bit different from being stationed in a single Broadway theater. The band has already completed a sold-out tour of Europe so we wondered whether Katz-Bohen and Yanowitz shared road tips from their wealth of experience with their bandmate.

“I would say not really. Michael, he adjusted, no problem. I mean, first and foremost Michael is a music fan,” said Yanowitz. “He’s just a natural fit. He’s been on stage a ton, all-sized stages. And you know, it is cool to play these little places, especially for our first time. It’s an intimate glimpse at us.”

“Yeah, and I think doing a full performance schedule of Hedwig, even though we were always at the same theater in New York, doing that thing with one day off, on Sundays with two shows gives you a sense of what you’re in for, you know?” Hall added.

We asked what we’re in for when the band hits the stage here in Houston. The live show has drawn raves from observers overseas like When the Horn Blows, which described the evening’s events as “near-hallucinatory” and Louder Than War, which reported the band “wowed the tightly-packed, mask-wearing audience members with a breath-taking performance in the most intimate of venues.”

“I think it was Matt that said this, that somebody came to see our first gig — and I’ve heard some version of this —  but people will come and say ‘I didn’t know what to expect, but it wasn’t that,'” Hall said, creating a sense of mystery only a fine actor (or a skilled serial killer) can. “Ultimately we hope people feel like they’ve been, to some degree, taken on a ride and that it’s not too bumpy a landing when it’s over.”