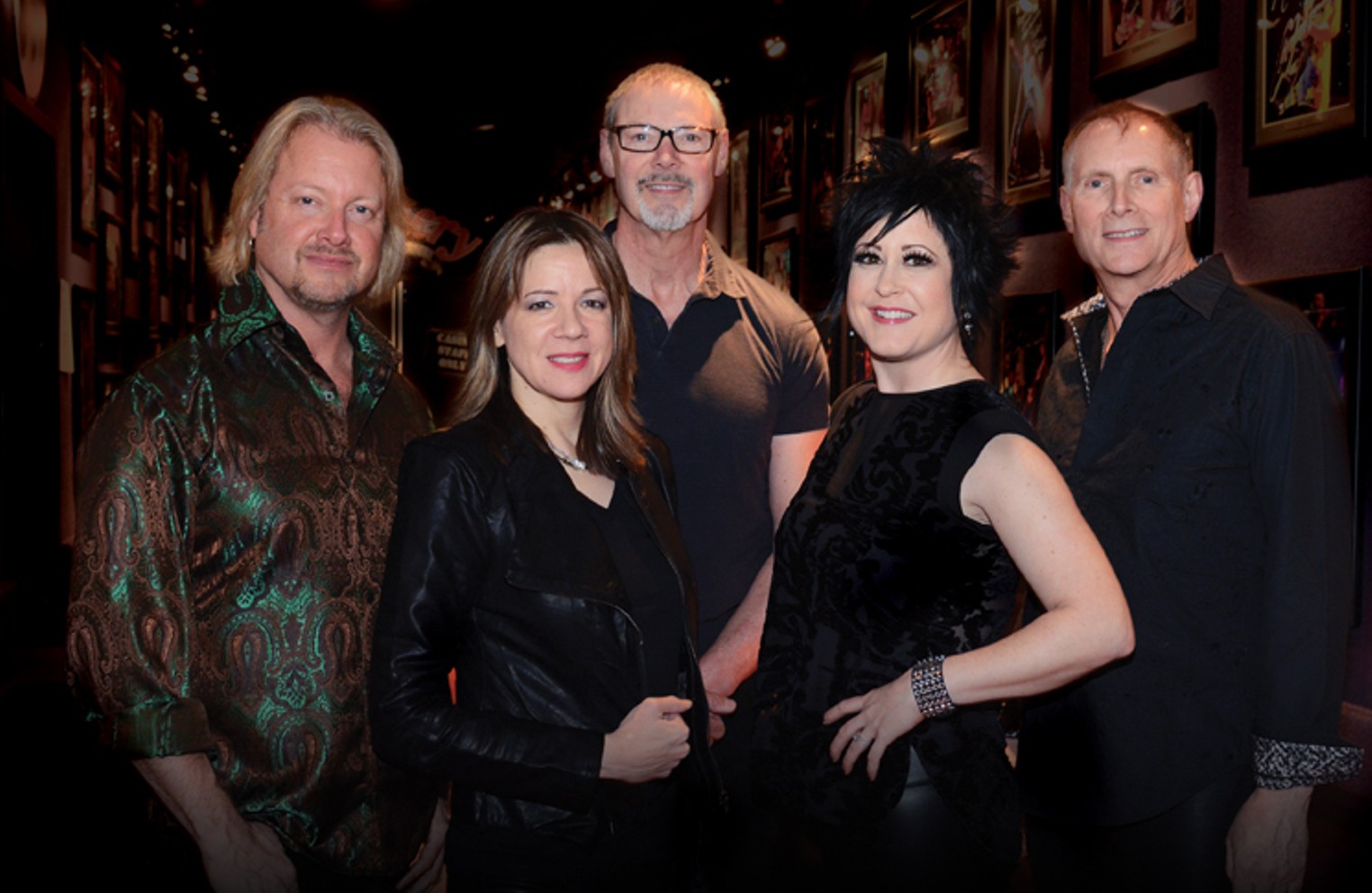 Asked to name any members of the band Heart, most casual listeners would be able to mentally cough up sisters Ann and Nancy Wilson. After all, the vocalist and guitarist have been the “faces” and most photographed of the group since their 1975 debut Dreamboat Annie, as well as being the main creative songwriting forces.
click to enlarge

Photo from Heart by Heart LLC

Often overlooked is that there was a band who played on all those epochal classic rock Heart tracks like “Crazy on You,” “Barracuda,” “Heartless,” “Magic Man,” “Straight On,” “Even it Up,” “Kick It Out” and the gentle “Dog & Butterfly.” The rhythm section on all of those cuts was Steve Fossen (bass) and Michael Derosier (drums).

Both men now anchor Heart by Heart, which since 2010 have toured playing the band’s catalog including hits, deep cuts and some material recorded since both parted ways with the group in 1982.

The rest of the lineup includes lead vocalist Somar Macek, guitarist/keyboardist Lizzy Daymont and guitarist Chad Quist. They will make a return appearance to Miller Outdoor Theatre on April 30.

“I love the Miller, it’s a great building. And just walking around, it seemed like a nice, mellow area,” Derosier says via Zoom with Fossen and Macek on a sofa.

“Yeah, and it’s by a zoo! That’s cool,” Fossen adds. “And it’s by a lot of medical centers nearby. People need medical attention.”

“It’s good to have them close by. You know, in case something happens to us!” Derosier laughs.

The story of Heart by Heart started in early 2008 when Fossen and Macek first met as part of a temporary group (along with original Heart guitarist Roger Fisher and Derosier) put together to play Heart material at a party. By the end of the year they were a couple, and then started performing together informally as a duo at bistros and wine bars and jam nights.

In 2010, they were approached to open some shows for country singer Dwight Yoakam. So they beefed up the group by adding Derosier and Randy Hansen on guitar. The tour fell through, but something was definitely there, and Heart by Heart (a name that Macek came up with to describe the couple’s physical proximity onstage) made their debut as a group at a benefit for the Susan G. Komen Foundation. Daymont joined in 2013 and Quist in 2017.

Oh, and Fossen and Macek got married along the way. “We have some, uh, lively banter about being married onstage. Sort of like George Burns and Gracie Allen!” Fossen laughs. “I’m sure no one remembers that but me since I’m 72 years old!” (Derosier is 70).

Photo from Heart by Heart LLC

One thing they agreed on: the songs would be played in the same arrangements, keys and format as the hit records. They were not looking to alter people’s sonic memories as the current Heart sometimes does.

Like the Doobie Brothers, Heart had two distinctive sounds in their commercial heyday. The early, rawer material mentioned already is continuously spun on classic rock radio.

The band later moved into more synth-heavy and polished ‘80s songs (“What About Love?” “Never,” “Alone,” “These Dreams”),” all accompanied by special effects-laden videos that showcased the Wilson sisters’ sex appeal while the band wore elaborate stage costumes.

“We’re really happy that classic rock radio keeps our music alive. And the most popular songs today are those [earlier] ones,” Fossen says.

“We do all the songs that we think people want to hear, and then our favorite deeper cuts like ‘Devil Delight,’ ‘Mistral Wind,’ and ‘Lighter Touch,’” Derosier says. Fossen adds that they keep an eye on the royalty statements they receive to see which songs are the most popular in terms of sales and downloads today, but they do focus on the classic 1975-82 era they were in the band for.

Both Fossen and Derosier were part of Heart’s original lineup, and Fossen goes back even further to the 1967 founding of The Army (with Roger Fisher), which morphed into Hocus Pocus, then White Heart, and finally Heart. He predates Ann Wilson’s joining in 1971, and then Nancy a couple of years later.

Heart By Heart is, in effect, a Heart tribute band that features two former members. But the five musicians onstage definitely put their own spin and stamp on the material.

“My favorite song to do is ‘Magic Man,’ but I also like ‘Devil Delight’ because you have to have an attitude to play that,” Macek says. “It would be very difficult to go onstage each night and thinking I have to be exactly like Ann Wilson. It’s not like the Heart tribute bands where they go on in the [‘80s-era] costumes and have to [mimic] the band. But I hope it’s pretty close to what people originally heard when they heard these songs.”

“Most [classic rock] bands nowadays have a fraction of their original lineup. That’s just the way it is for different reasons,” Derosier adds. “But if you don’t represent the songs, you’re not giving people that nostalgia they want. You want your audience to go away satisfied.”

Fossen and Derosier are very glad to finally be playing in front of live people again, unlike some of their more, uh, unusual pandemic gigs.

“We’ve done some shows in front of cardboard cut outs of people and their dogs!” Derosier laughs. “It was a virtual, live broadcast thing. I guess the cut outs were there for our benefit. But I mean, you’d throw a guitar pick out there and it would bounce off some guy’s face!”

Fossen says it actually benefitted them psychologically to see smiling faces—even frozen cardboard ones—in the audience. And it was a way for them, like thousands of other bands, to generate some revenue.

The pair have had an often fractious relationship with the Wilson sisters since they were voted out of Heart in 1982. Both contend that the band’s songwriting was more collaborative than the Wilsons-only credits on the records. And when the original band (the Wilsons, Fossen, Derosier, Fisher, and Howard Leese) were inducted into the Rock and Roll Hall of Fame in 2013, the sextet only played together on “Crazy on You.”

The Wilsons then did an acoustic duet of “Dreamboat Annie” before bringing out their then-current version of the band for “Barracuda,” even though the originals had rehearsed it together. That rankled Fossen and Derosier, and still does. But as we’ve seen with Rock Hall induction performances like Creedence Clearwater Revival and Blondie, it’s the band’s most recognizable names who hold more sway over production aspects like that.

“It was very surreal and a bit uncomfortable as far as I was concerned, but I was very happy to have my son there with me,” Derosier says. “I was backstage with Dave Grohl and Taylor Hawkins of the Foo Fighters, who were there to induct Rush. We were all talking drums when ‘Barracuda’ started, and it sounded weird. Dave and Taylor said it was kind of slow and dragging!”

Today, even “official” Heart is somewhat in flux. The Wilson sisters had a very public falling out in 2016 over a family matter and put the band on hiatus, though reunited for a brief 2019 tour. Since then, Nancy Wilson has put out last year’s solo record You and Me and “Nancy Wilson’s Heart” with Kimberly Nichole on lead vocals will be opening shows for Styx soon. Ann Wilson will shortly release solo effort Fierce Bliss with a supporting tour.

As for playing in Texas, Derosier and Fossen remember when Heart played the Texxas Jam at the Cotton Bowl in Dallas 1979 on a bill that also included Van Halen, Boston and Blue Öyster Cult among the acts (they also played the event the year before).

“All day long it was super, super hot and they were even spraying the crowd with hoses! And then they ran out of drinking water, which made it miserable. So, we were already uncomfortable and then they put the stage lights on, which made it even hotter,” Fossen says.

“About 2/3rds through our set, Nancy started the chords to ‘Mistral Wind’ and this breeze came through the stadium, and the temperature dropped about 10 degrees. The crowd went ‘Yeeeah!’ And the wind blew through our hair. When we had hair. Now, it just goes ‘Whoosh!’”

“The last time we played Houston at [Miller Outdoor Theatre], I wondered how we were going to survive playing outdoors because it was going to be so hot,” Macek offers. “Then they told us there are these air conditioning fans in the bottom of the stage. And we’re like ‘No way! That’s great!’”

Heart by Heart play 8:15 p.m. on Saturday, April 30, at the Miller Outdoor Theatre, 6000 Hermann Park. For information, call 832-487-7102 or visit MillerOutdoorTheatre.com. Lawn seating is free, but free seated tickets should be reserved online.

For more on Heart by Heart, visit HeartbyHeart.com