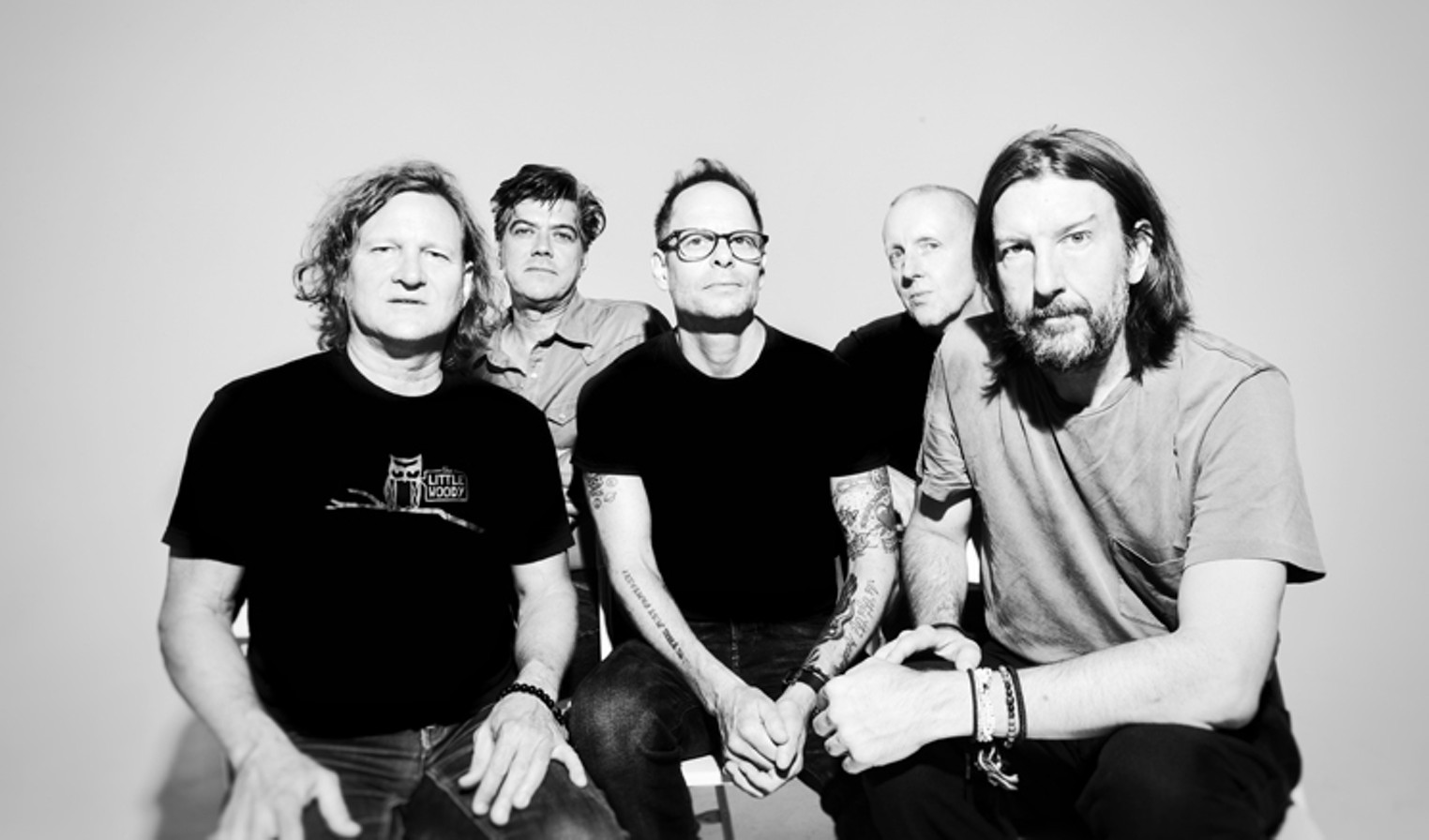 It was March 2019 and the last chords of “Cheatin’” rang out over the audience at Houston’s House of Blues. It’s the last track on the Gin Blossoms’ New Miserable Experience, and the band was performing their 1992 breakthrough record in its entirety on this tour.

Houston was the last stop, and lead singer Robin Wilson looked almost wistful. “This is probably the last time we’ll ever do this,” he said. “It’s been great!”

Flash forward to almost exactly three years later. The Gin Blossoms will return to the Bayou City on March 3 at the Heights Theater to perform the whole record again (along with other career-spanning numbers) for its 30th anniversary.

“Well, honestly, it was pressure from the fans and our booking agent and manager to do it again. We sell more tickets with New Miserable Experience!” Wilson laughs. “But the anniversary is worth noting. And it’s really not asking much from us as a band. I’m already thinking how to incorporate our other material into the show.”

New Miserable Experience became a big success and featured three considerable radio and MTV hits (“Hey Jealousy,” “Until I Fall Away,” “Found Out About You”), smaller ones (“Mrs. Rita,” “Allison Road”), caustic tales of romantic despair and drinking (“Lost Horizon,” “Pieces of the Night,”) and some genre-hopping (“Cajun Song,” “Cheatin’”).

However, it was not a success upon its initial release. That took nearly another year, a heavy promotional push and a complete reissue with new artwork. And for the band, that was a very long year waiting.

“There were moments that [worried] us for sure,” Wilson says. “In early 1993 we were opening for the Neville Brothers and hanging out with a record company VP. We had only sold about 76,000 copies of the record. One night in our van, I asked what was going to happen after the tour, and he said they might be moving on. And I thought ‘Fuck!’”

A month later, management decided to send them on a tour of college campuses across the country, which would also generate publicity. It was then that “Hey Jealousy” started to pick up steam on the airwaves.

“It was grueling. Every morning we’d hear ourselves on the radio, and then in the afternoon play a college cafeteria or student union, and then a nightclub gig in town,” Wilson offers. “And we’d get sick all the time. It would work its way around the van. At one point, I felt hopeless.”

Wilson says that a conversation between a VP at MTV and VP at their A&M Records label led to a decision: If the band would shoot a new, better video for “Hey Jealousy” (which would actually be their third version), the channel would play it and break the band. That’s when A&M relaunched New Miserable Experience in the late summer.

No discussion of the record can leave out one aspect forever tied to it, the tragic fate of original guitarist Doug Hopkins, who wrote both “Hey Jealousy” and “Found Out About You.”

A troubled man with as severe, uncontrollable drinking problem, Hopkins was fired by the group toward the end of the album’s creation. Adding a sting was for the 1993 reissue while his name (and guitar) remained on the liner notes and actual music, the cover photo now included his replacement, Scotty Johnson.

It devastated Hopkins. And when the record became a huge smash, Hopkins committed suicide by gun in December. The band’s next effort carried the solemn title Congratulations, I’m Sorry.

Wilson takes a moment at each show to pay tribute to his late friend, and he especially likes performing the New Miserable Experience deep cut “Hold Me Down.” It’s the only recorded song that the pair is crediting with writing together, an upbeat-sounding tune with dark lyrics about excessive partying, lack of self-control and substance abuse.

He says that he shared with Hopkins a vision for an “edgy, upbeat, Cheap Trick kind of song with some darkness in the lyrics.” A couple of days later, Hopkins came back with most of “Hold Me Down” while Wilson added musical and lyrical aspects.

“There were a few other things we collaborated on that Doug never wanted to give me credit for, but that one’s special,” he says. “And with the perspective of time, that means a lot to me.”

As for the entirety of New Miserable Experience, it holds a place in Wilson’s heart and mind outside of it just being their commercial breakthrough.

“So many memories. The first time we went to Ardent Studios to work with [co-producer and engineer] John Hampton. And Doug’s melting down and that relationship falling apart while we were trying to make the record. There’s a lot of heartbreak,” he says.

“And the hours and hours in that fucking van! Sometimes 15-20 hours a day. It was an experience. But we pulled it off and built a career making music that’s really connected with people. Music that we still play today. It’s a rare thing to have that opportunity, and we are humbled by it.”

The Gin Blossoms have released a handful of other studio records, with their most recent being 2018’s great Mixed Reality. However, the realities of the music business have changed drastically over the decades, and there’s practically no consistent outlet to hear new music from bands who got their start in the ‘70s, ‘80s or ‘90s.

Surprisingly, Wilson doesn’t betray extreme frustration. Though he says that creating new music is just as important to the group as playing the hits like those mentioned along with “Follow You Down,” “’Til I Hear it From You” and “As Long As It Matters.”

“It’s not something we think about too much. We take the new material and put it into the set. Honestly, a good portion of the people in the audience if they hear a newer song, they don’t recognize it like that,” Wilson says.

“They might think it’s a B-side from the 2000s or something they don’t remember from the ‘90s. As long as the show doesn’t lose momentum and we play engaging material, the show keeps going. But of course, you break out one of the hits, and everybody’s phones come out.”

The current band includes 4/5s of the classic lineup—Wilson, Bill Leen (bass), and Jesse Valenzuela and Scotty Johnson (guitars). Drummer Scott Hessel has been in for more than a decade and is actually the longest-serving skin thumper. Phillip Rhodes drummed on the original record.

“It’s a brotherhood. And after 33 years, the [four classic members] are pretty much through all the bullshit and are in tune with each other and know what to expect,” Wilson offers. “It’s a complex brew. But we’re a family that’s dedicated to making sure that all our kids get through college!”

After their current headlining theater tour, the Gin Blossoms will embark on a summer tour of larger venues with fellow ‘90s alt-rockers the Barenaked Ladies and Toad the Wet Sprocket.

Wilson says there’s no sense of real competition among the acts but professes amazement that on similar previous tours with acts like Everclear, Sugar Ray, Fastball, Marcy Playground and Vertical Horizon, “how fucked up” some of those bands were in terms of professionalism.

Finally, the Gin Blossoms are blessed with not one but two recognizable band logos that spell out the band’s name: the original swirly, cursive script-looking one, and a later with a block font and lightning bolts.

They’ve alternated on record covers, and both are available on band merchandise. Wilson says he favors the lightning-bolt one but admits he’s in the minority vote of his bandmates as the original is more familiar and sells better.

But that didn’t stop the man who says in another life he would be a graphic designer, photographer or art director (all roles he already fills in the Gin Blossoms) from creating one logo that the public will never see.

“A couple of years ago, I tried to design a heavy metal-style T-shirt for the band, and the logo had a flaming pentagram and ‘Gin Blossoms’ was written in blood like a Slayer T-shirt. I thought it was so fucking awesome and so fucking funny and ironic!” Wilson remembers. “But it got voted down among my partners. They didn’t think it was funny. But I tried!”

For more on the Gin Blossoms, visit GinBlossoms.net