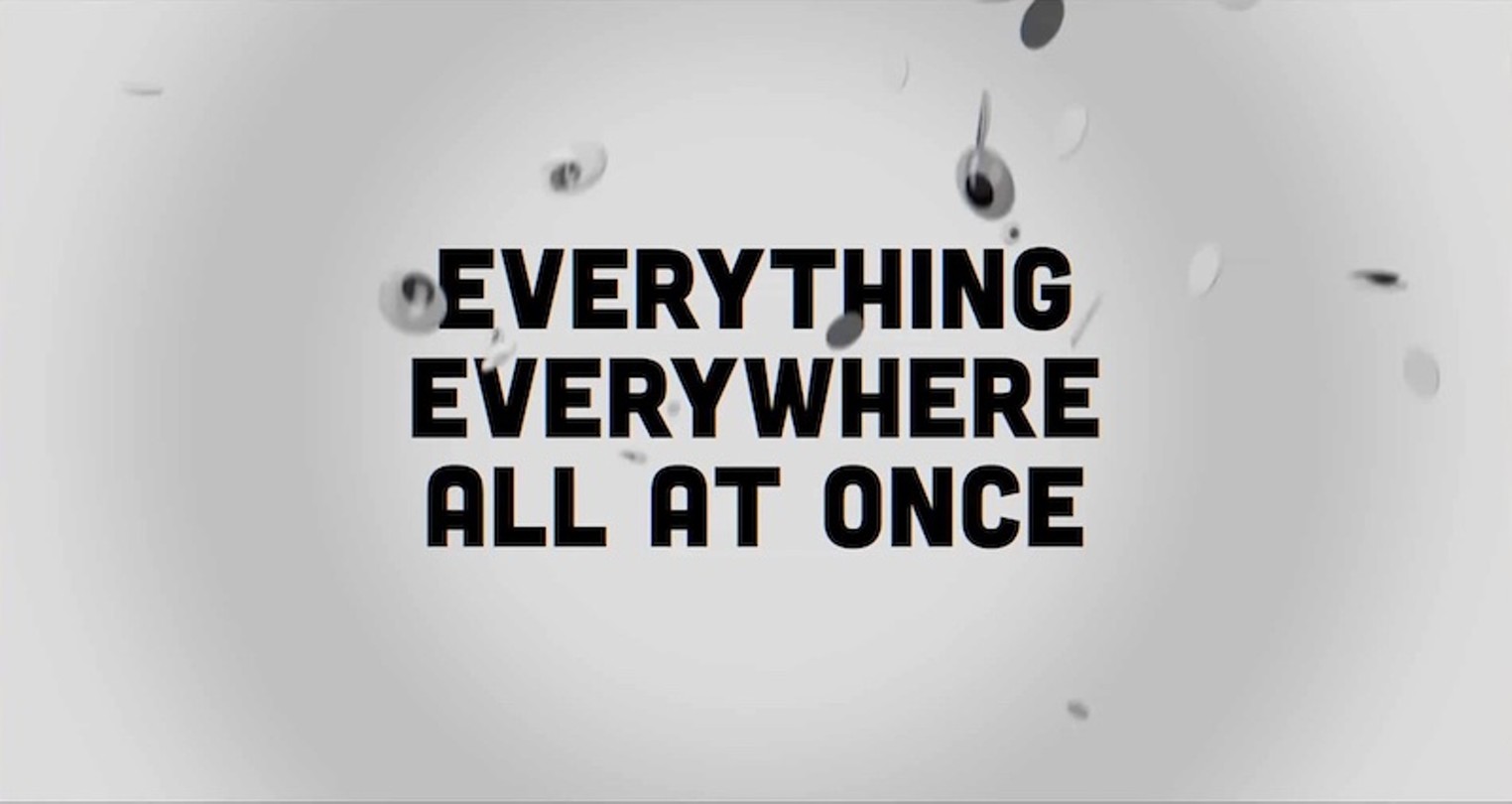 Title: Everything Everywhere All at Once

Describe This Movie In One It’s the Great Pumpkin, Charlie Brown Quote:

CHARLIE BROWN: I got a rock.

Rating Using Random Objects Relevant To The Film: 4.5 Menocus out of 5.

Better Tagline: “Bet you won’t laugh at a guy in a fanny pack again.”

Not So Brief Plot Synopsis: Evelyn Wang (Michelle Yeoh) is dealing with — in the words of Crash Davis — a lot of shit. The laundromat she runs with husband Waymond (Ke Huy Quan) is being audited by the I.R.S., her father (James Hong) has just arrived from China in the midst of her preparations for a Chinese New Year party, and she’s having trouble coming to grips with her daughter Joy’s (Stephanie Hsu) coming out. Oh, and she’s just about to learn there are an infinite number of parallel universes, all of which may be destroyed.

“Critical” Analysis: It’s cliché at this point, but when someone tells you that the less you know going into Everything Everywhere All at Once, the better, they’re not kidding. Co-writer directors Dan Kwan and Daniel Scheinert (collectively known as “Daniels”) and A24 have created an exhilaratingly breath of fresh cinematic air. This movie is a joy to behold, even if it isn’t wholly “original.”

The multiverse concept, for example, is one we’re all too familiar with these days. The idea here is actually a feature-length version of the many-worlds theory, in which every decision creates its own reality. One early example that springs to mind is Richard Linklater’s character explaining the phenomenon in Slacker (a more recent one is NBC’s latest show for the clinically depressed, Ordinary Joe).

But rarely has such a thing been rendered with such joie de vivre. The Daniels accomplish something almost never seen in movies like this by teasing just enough alternate realities to make us want to see much more. Their multiverse is both staggering in scope and barely fleshed out, to the point where every movie made from now to the end of time could be about alterna-Evelyns and that would be just peachy.

EEAAO is divided into three chapters, corresponding to the title. “Part 1 – Everything” takes up the most significant chunk of run-time, seeing as it has to both introduce the Wangs and their larger cosmological background, and Evelyn’s importance in same.

And for a lot people in the Year of Our Ongoing Pandemic 2022, the expression “living your worst you” is really going to resonate.

Yeoh, as if it needs to be said, is wonderful. Evelyn isn’t a wholly sympathetic character when we meet her, but she easily captures both the weariness of middle age and the spark of hope that still exists in most (some?) of us belonging to that particular cohort. Meanwhile, Ke Huy Quan — who retired from acting in 2002 due to a lack of roles — is a delight in what amounts to triple duty. Same goes for Hsu, who juggles perhaps the movie’s most disparate characters.

Cinematic multiverses aren’t new, of course, and neither are films weirdly combining kung fu, family dynamics, and body horror (in yet another alternative universe, this would’ve been a hell of a midnight movie). The difference is, while Everything Everywhere All at Once is breathtakingly weird, it’s surprisingly uplifting, ultimately rejecting the villain’s nihilism for hope.

It’s also deeply grounded in the relationship between Evelyn and Joy, providing one of the most affecting representations of 21st century parenthood we’ve seen to date. EEAAO hits in unexpected ways, both emotional and visual, and is one of the most delightful theater experiences I’ve had in years.

Everything Everywhere All at Once is in theaters now.