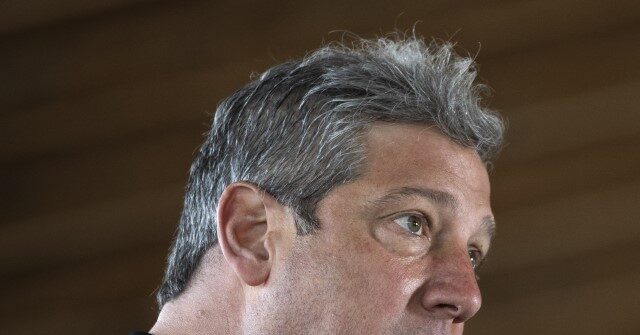 Ohio U.S. Senate hopeful Rep. Tim Ryan (D) claimed that proxy voting in Congress should be permanent — ultimately allowing lawmakers to not show up for in-person work — after he abused the rule in order to hit the campaign trail all week.

Ryan, a ten-term congressman, is taking a shot at the Senate after a failed 2020 presidential nomination bid. He was reelected to Congress in 2020 and has been a Biden surrogate.

He was caught lying recently about why he was proxy voting.

Now — with a long track record of abusing the proxy voting system and being caught lying about it, and reportedly keeping his Ohio constituent offices closed — he wants to make proxy voting permanent, which would allow lawmakers to not show up for in-person work in Congress.

“Members of Congress should be able to use the technology at our disposal to do our jobs while also meeting face-to-face with the people we serve, taking care of kids, and more,” Ryan said. “Unlike JD Vance, who is terrified to talk to voters here and seems to have spent the entire general election so far hiding in his DC townhouse.”

In response to Ryan, who is running for the Senate where he ironically would not have the ability to proxy vote, Republicans attacked the career politician for lying to his constituents while getting paid hundreds of thousands of dollars by taxpayers.

“Not only did Tim Ryan skip work to campaign, he lied about why and blamed the pandemic,” Taylor Van Kirk, spokesperson for J.D. Vance, Ryan’s Republican opponent, told Breitbart News. “Tim Ryan has spent 20 years in DC living off the taxpayers to work Tuesday through Thursday, while regular Ohioans show up to work five days a week, and now he doesn’t want to show up in person at all?”

Lizzie Litzow, deputy communications director for the National Republican Senatorial Committee (NRSC), the committee in charge of helping Republicans get elected to the Senate, also told Breitbart News, “Career politician Tim Ryan gets paid hundreds of thousands of dollars by taxpayers and is using Covid voting procedures to not do the job they’re paying him to do.”

“And he wants to make sure other career politicians like him can do the same by making remote voting rules permanent,” Litzow added. “Unfortunately for him, he won’t be able to benefit from taxpayer-funded vacations for much longer, since Ohioans aren’t big fans of paying people for nothing.”

As Breitbart News summarized this past week, Ryan reportedly has a long track record of abusing the proxy voting system and using the coronavirus pandemic as an excuse to waste taxpayer resources.

The Washington Free Beacon first reported in February that Ryan was fundraising in Los Angeles “the day after the Super Bowl” and, at the time, had already voted by proxy 60 times. Additionally, in April, the outlet reported that in 2021 he kept his Ohio constituent office, which costs tens of thousands of taxpayers’ dollars in rent, closed — purportedly because of coronavirus, though he campaigned in person during that time.

In fact, in June 202o, Ryan criticized a lawsuit brought by Republicans to stop proxy voting. At the time, Ryan called it “political theater,” hoping that the court would let the case go because Republicans were trying to “gin up controversy where there really isn’t any.”

As @TimRyan‘s district, #OH13, has gotten more conservative, what has he learned about outreach as a Dem?

“You focus on the workers…you focus on their struggles, that they’ve been doing everything right. They show up at work, they do their job, and they still can’t get ahead.” pic.twitter.com/bazMqlM734

Jacob Bliss is a reporter for Breitbart News. Write to him at jbliss@breitbart.com or follow him on Twitter @JacobMBliss.