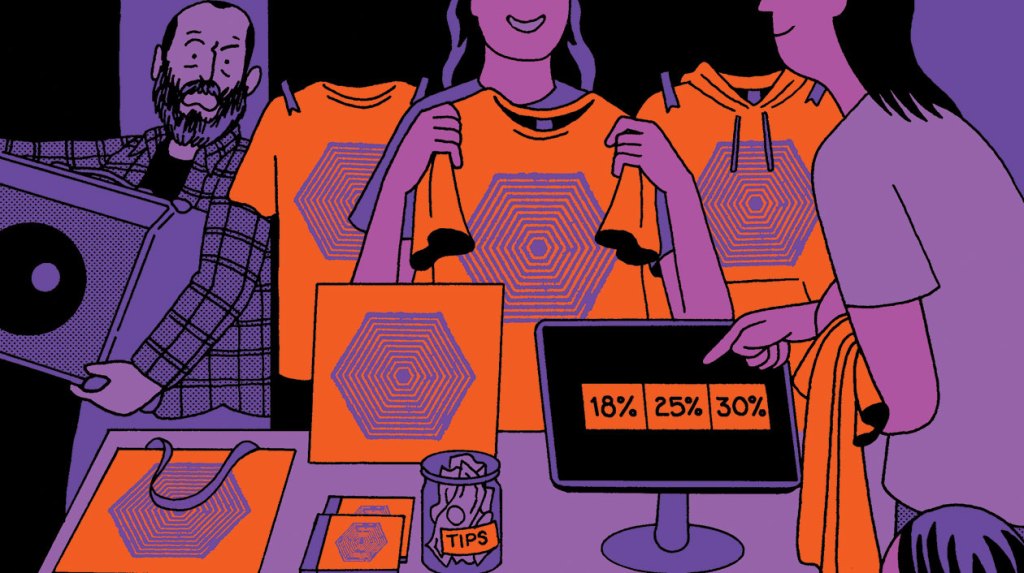 Lately, Ben Brannen has been getting a lot of calls. The co-founder/president of atVenu, which designs software to aid merchandise sellers at concerts, says people are curious, confused and even angry about the tips that merch vendors are racking up at some live shows. Unexpectedly, tips in some cases have been so large — an “extraordinary amount of money,” according to one manager — that they’ve become divisive.

“This is the hot-button issue right now in the tour merch world,” Brannen says. “We’re talking about five figures’ worth of tips in a night sometimes, a lot of money moving around. Everybody wants a piece of that. It’s the music industry — everyone has to have a piece of every dollar that’s out there.”

The growing popularity of digital payment systems has a lot to do with the increase in tips at the merch table. Much like at cafes and restaurants, these systems make it easy to request a 15% or 20% tip after a purchase. While the economy was already moving away from relying on grubby dollar bills, the pandemic accelerated that process. And whereas tipping a buck or two for a hoodie may have been standard before, transferring tipping rates that are common in other service industries to concert merch is resulting in head-turning tip totals.

Data from atVenu indicates that 84% of all transactions that used the company’s software last year — it was employed at more than 125,000 shows — were completed by credit cards as opposed to 65% in 2019. Even in venues that still accept cash, an experienced member of the merch community says, “We’ll have nights with our artists where we’ll do thousands and thousands of dollars in sales, and it’ll be less than 5% of that in cash.”

The prevalence of digital payment systems makes the tip earnings of merch salespeople more transparent. A merch table tip jar full of dollar bills isn’t necessarily something an artist manager will tally up; sales conducted on an iPad, though, are calculated automatically each night. “I was looking at the sales reports after a show,” one artist manager says. “And the tips were insane.”

Take all these trends together, and the tipping issue “has reached a boiling point,” says Brannen. He was one of the few people willing to speak about this topic on the record and stresses that he’s an impartial middleman relaying what he has heard from software users, a group that includes merch companies, artist managers, artist-merch road managers, venues and festivals.

Artists playing small to midsize venues often hire additional local sellers to supplement their own merch operations. (Some artists have a merch company that issues shirts to a venue and the venue does the selling.) Tips add to the sellers’ salary, but artist managers worry that tipping could become a negative experience for fans if they’re being asked to add something like 20% on top of the price of merchandise when they already paid for a ticket — and probably bought some drinks or food, too.

“I don’t think fans should be pressured into needing to tip $5 to $8 for buying a T-shirt,” says one manager who spoke on the condition of anonymity for fear of upsetting merch sellers. And with road crews in high demand, fans aren’t the only concern. “The last thing your front-of-house guy or lighting director wants to see is that your merch person is making a few hundred dollars more than they are. That is going to be a massive issue.”

But members of the merch-vendor community — supported by a few managers as well — believe that both the grueling nature of their job and their financial contributions to a tour are underappreciated. Not only are they responsible for moving heavy boxes in and out of venues over the course of a workday that often spans 12 hours or more, they also have to keep track of an extensive inventory and are responsible for large amounts of money. And no one is forcing the fans to tip them.

What’s more, the merchandise sellers serve as the band’s public representatives — unlike a guitar tech, they are in the trenches interacting with fans in close quarters. “You’ll hear, ‘This guy made an extra $400 in tips tonight selling merch. I want to make that money,’ ” one merch vendor says. “Do you want to stand for five hours with 1,000 different people breathing in your face?”

In addition, merch sellers “are the only people outside of the band on tour that literally bring in more revenue,” as one manager points out. Especially for bands that are touring on thin margins, a successful merch operation may be the difference between a profitable tour and one that loses money or breaks even. One manager who is pro-tipping estimates a recent tour might have sold 30% less merch if he didn’t have top vendors interacting with fans and ensuring everything ran smoothly.

Managers who are concerned about tipping blowing back on fans have taken a variety of approaches. Some have turned the tipping function off on their iPads, preferring to stick to the old-fashioned tip jar — maybe they raise the salaries for their merch sellers to make up for that. Others have simply reset the tipping levels on their equipment, so fans see a 5% or 10% option rather than something higher.

Then there are bands that are asking merch sellers to distribute some of their tips, either to members of the band or the rest of the crew (a practice similar to the restaurant industry’s pooling of tips between wait and kitchen staff). That “does not go over well with the merch reps that I’ve talked to,” Brannen says. “They’re like, ‘Fuck that. I’m not working with this band.’” In fact, there is a list circulating of acts that have instituted such policies regarding merch tips, according to a source in the merch community who requested anonymity.

For now, there’s no industry standard around tipping, and artists, managers and their merch sellers are figuring out what to do on a tour-by-tour basis. “It’s a really touchy topic,” says a member of the merch community. “And I don’t see it going away.”