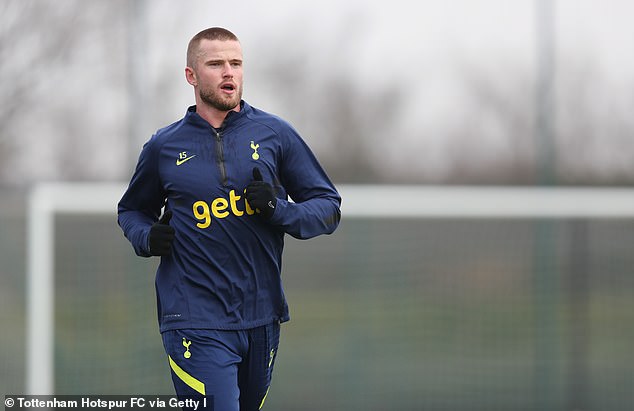 Tottenham boss Antonio Conte has received a defensive boost ahead of his side’s crucial trip to his former side Chelsea this weekend, with Eric Dier available for the derby at Stamford Bridge.

Dier has been struggling with a muscular problem and hasn’t featured since Tottenham’s 1-0 win at Watford on New Year’s Day, with the team since enduring a tricky patch of form and looking defensively shaky

The trio of Japhet Tanganga, Davinson Sanchez and Ben Davies have looked vulnerable at times this year – with key defender Cristian Romero nursing a long-term injury – and the return of Dier will be a huge boost to Conte ahead of such a big game, allowing him to tinker with his options as he chases a top four spot.

However, he revealed there were ‘a couple of fresh injuries’ after their dramatic 3-2 victory at Leicester City in midweek.

‘After the game against Leicester we are trying to manage a couple of situation, fresh injuries,’ he said at his pre-match press conference.

‘We have to make the right decision about a couple of our players. Eric Dier had a good training session for us and is available.’

Dier struggled for form last season and was dropped by Jose Mourinho – with his poor displays costing him a pace in Gareth Southgate’s England squad for Euro 2020.

He’s turned things around this term, however, starting 18 of Tottenham’s 19 games and putting in some much-improved performances under Conte.

While he’ll be pleased to have Dier back, there was disappointing news on Son Heung-min – who is still yet to recover from his own muscle injury – and the Italian expects him to be missing until after the upcoming international break.

‘Sonny not yet,’ he added. ‘We have to wait. He’s coming along well but we have to wait until after the international break.’

There was disappointing news on Son Heung-min, who is not yet ready to return from injury

The win at Leicester – which saw Steven Bergwijn net twice in 80 stoppage time seconds to pull off an incredible result – was a major lift to morale after a difficult week couple of weeks saw the team crash out of the Carabao Cup to Chelsea and scrape past League One Morecambe in the FA Cup.

And Spurs received another timely boost ahead of their trip to Chelsea on Sunday, as club captain Hugo Lloris ended speculation about his future by signing a new two-year deal on Friday.

Conte hailed the importance of Lloris after he committed his future to the club, calling the 35-year-old ‘a point of reference’ for the whole squad.