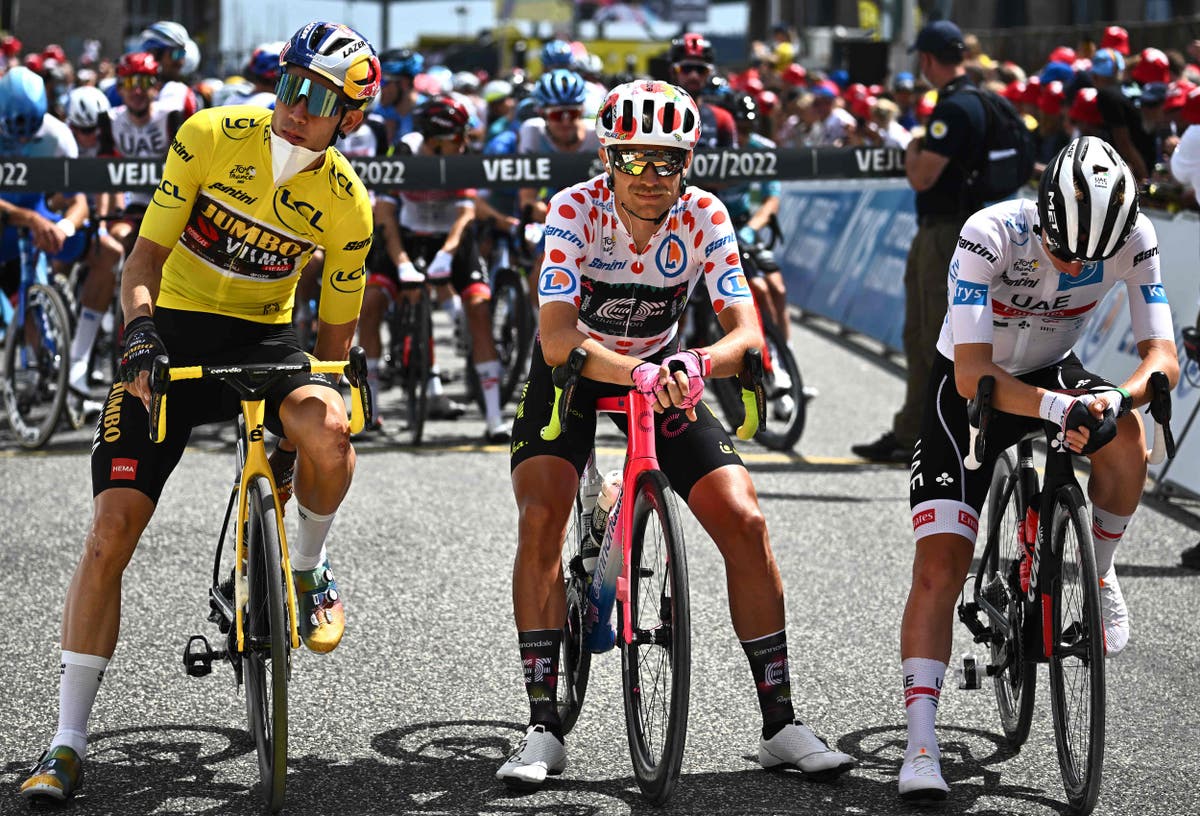 The 2022 Tour de France sees 176 riders compete for the famous yellow jersey or maillot jaune which rewards the overall winner of the race.

While the yellow jersey, won in 2020 and 2021 by Slovenian prodigy Tadej Pogacar, is the most famous and prestigious of them all, there are three other colours to look out for in the peloton taking on this year’s Tour de France route.

The green, polka dot, and white jerseys all have their own meanings, histories and significance for their respective holders.

While some riders (domestiques) work purely for the benefit of their team leader, others work to win individual stages, and others aim purely for one particular jersey.

It is not just the jerseys to watch out for – those riders wearing yellow helmets are the team leading overall when their times are added together, while the previous day’s combativity prize winner (the most aggressive racer) wears a red ‘bib’.

And anyone wearing a rainbow jersey is the reigning world champion – though this year the road champion Julian Alaphilippe is absent, still recovering from injury.

The biggest prize in cycling is the famous yellow jersey of the Tour de France. It is the awarded to the overall winner and worn by the current race leader at the start of each stage, and it is considered hugely prestigious to don the maillot jaune. It was initially introduced so fans could clearly spot the rider in charge, and took its colour from L’Auto (today L’Equipe), the newspaper owned by race founder Henri Desgrange.

The green jersey is the prestigious prize given to the best sprinter in the Tour. The fastest in the pack compete for the biggest points at the end of flat stages and a smaller haul of points on offer during stages – called intermediate sprints. Peter Sagan won a record-equalling sixth green jersey last year, while Britain’s Mark Cavendish has won two and finished runner-up three times.

Polka dot – King of the Mountains

Perhaps almost as famous as the yellow jersey itself, the red polka dots on a white base are awarded to the rider who earns the most King of the Mountains points, which can be collected along the way by being the first to the top of categorised climbs – the more the severe the climb, the more points are on offer. Chris Froome won both the polka dot jersey and the yellow jersey in 2015, the first to do so since the great Eddy Merckx in 1970. In 2018 it was won by home favourite Julian Alaphilippe in some style.

The white jersey is awarded to the highest placed rider who was 24 or younger on the first day of the year. The jersey was introduced in 1975, before a 10-year hiatus in the 90s, but returned in the 21st century and has been won by Alberto Contador, Nairo Quintana, and both the British Yates twins, Simon and Adam.