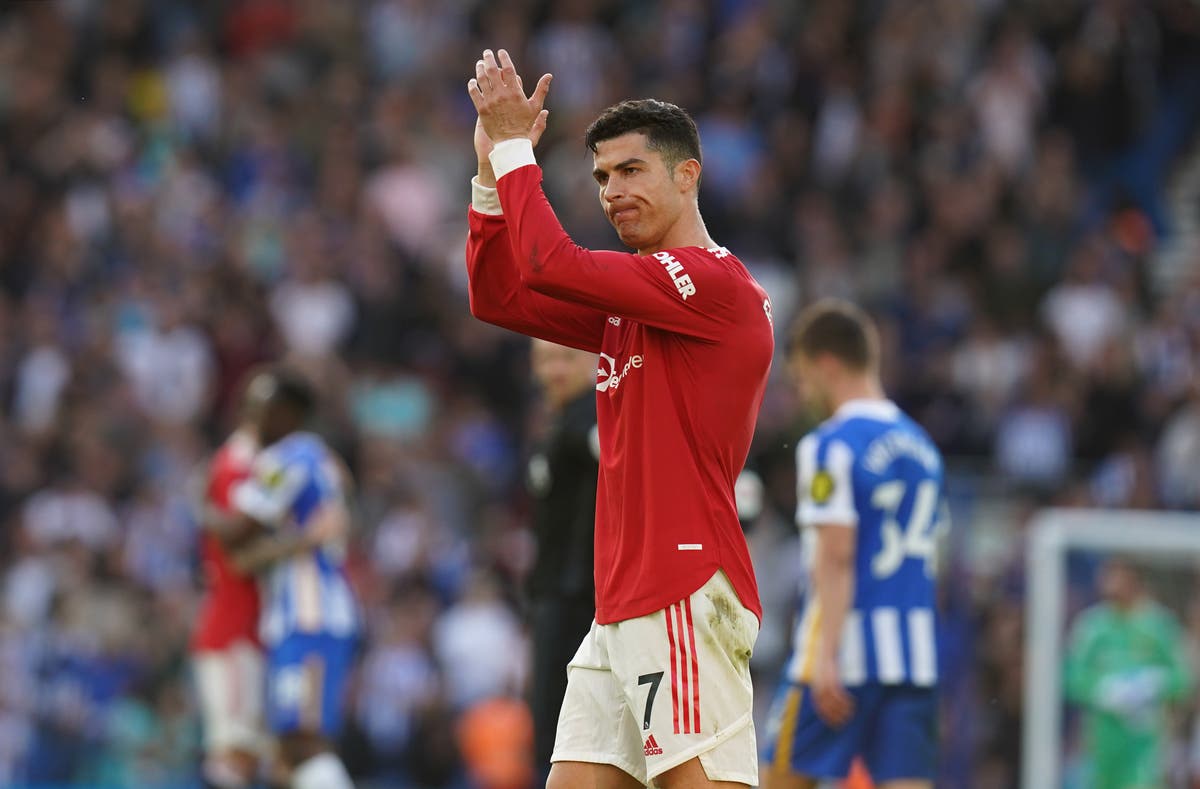 Football’s transfer machine continues to grind away and speculation is rampant as Premier League clubs and those across Europe look to finalise their squads for the new season.

Lisandro Martinez is headed to Old Trafford after Manchester United confirmed they have agreed a deal with Ajax worth up to £57m and the Argentine international defender will link up with his former boss Erik ten Hag.

Arsenal were also interested in the Argentina international but missed out on the left-sided centre-back despite the prospect of playing for Mikel Arteta appealing to him.

In other news, Cristiano Ronaldo could be on the verge of a shock move to Atletico Madrid, Armando Broja is edging closer to leaving Chelsea for West Ham, Arsenal are looking to tie up at least one of Oleksandr Zinchenko or Youri Tielemans and Matthijs de Ligt is Bayern Munich-bound from Juventus.

Follow all the latest transfer news with our live blog below:

AC Milan have reportedly opened talks with Tottenham to sign Japhet Tanganga with Spurs open to allowing the full-back out on loan following the arrival of Clement Lenglet.

Sky Sports News reported the interest of other clubs in the Premier League including Bournemouth and Southampton.

Tanganga is a product of Spurs’ academy and fulfils a vital homegrown player spot in their squad.

Robert Lewandowski said a desire for a new challenge motivated his decision to leave Bayern Munich and sign for Barcelona, while also fulfilling his “dream” of playing in LaLiga.

Barcelona have confirmed an agreement with Bayern Munich over an initial £38 million transfer of the 33-year-old Poland international, who is expected to sign a three-year contract with the option of an additional year.

Although the deal is not yet complete, Lewandowski has joined Barcelona on their pre-season tour of the United States and has met his new team-mates. It brings a protracted transfer saga to a close after Lewandowski announced plans to leave Bayern at the end of last season.

Lewandowski, who won eight Bundesliga titles in as many seasons with Bayern as well as the Champions League in 2020, becomes Barcelona’s fourth transfer of the summer, following Franck Kessie, Andreas Christensen and Raphinha.

Zlatan Ibrahimovic has renewed his contract for another year at AC Milan, despite facing the prospect of a lengthy rehabilitation from knee surgery.

At the end of May, Ibrahimovic – fresh from winning the Serie A title – had a planned procedure on his left knee to repair damage and instability caused by a previous anterior cruciate ligament injury.

The 40-year-old is expected to be out for up to eight months, so is not likely to be fully fit until midway through the 2022-23 campaign.

Nevertheless, AC Milan confirmed on Monday the veteran Swede, who scored eight goals last season as they won the Scudetto for the first time in 11 years, is set to further extend his stay at the San Siro.

“AC Milan is pleased to announce the renewal of Zlatan Ibrahimovic’s contract until June 30 2023,” a club statement read.

Heading could be banned from football for children under 12

Deliberate heading could be completely banned from football for children under 12 in England in two seasons’ time.

The Football Association announced on Monday it had been given approval by the game’s lawmakers, the International Football Association Board, to trial the removal of heading in selected grassroots competitions and leagues which come forward to take part in the coming season.

If successful, the FA will apply to IFAB for a law change to remove heading at under-12 level and below from the 2023-24 season.

It follows the introduction of guidance in 2020 which advised coaches against practising heading in training in football for children aged 11 and under, with a graduated introduction of light heading into training from under-12s up to under-16s level.

A recommended limit of 10 high-force headers per week in training was also introduced into professional football and the adult grassroots game before the start of last season.

Heading could be banned from football for children under 12

The Football Association has been given approval to run a trial

Cristiano Ronaldo ignoring calls as speculation over his future continues

Cristiano Ronaldo has taken to ignoring phone calls as speculation over his future continues this summer, including from former Manchester United and Portugal team-mate Nani.

Ronaldo has told United that he intends to leave the club this summer in order to play Champions League football but the 37-year-old has been informed by manager Erik ten Hag that he is not for sale.

Chelsea, Bayern Munich and Paris Saint-Germain are among clubs to have been linked with Ronaldo, who has yet to join United’s pre-season tour of Asia and Australia due to “personal reasons”.

The uncertainty it set to continue despite United’s stance while Ronaldo remains silent, and Nani has revealed that even those close to Ronaldo are not aware of his plans ahead of the upcoming season.

“When he’s on vacation he doesn’t answer the phone to anybody!” said Nani, who has joined Melbourne Victory and played against United in a friendly last week. “I tried to talk to him, but he said ‘I’m so busy now, we’ll talk soon’.”

Cristiano Ronaldo ignoring calls as speculation over his future continues

Manchester United insist the 37-year-old is not for sale

Chelsea have made a £40m offer for Paris St Germain centre-back Presnel Kimpembe and are back in talks with Sevilla over Jules Kounde, who is a target for Barcelona too – according to the Daily Mail.

The Blues have already signed Kalidou Koulibaly from Napoli this summer but want further defensive reinforcements following the departures of Andreas Christensen and Antonio Rudiger.

PSG are believed to be willing to sell Kimpembe for somewhere in the region of £42milion, while Fabrizio Romano confirms that Chelsea have made contact about a Kounde transfer.

Bukayo Saka contract ‘a matter of time’ for Arsenal

Arsenal boss Mikel Arteta is confident that Bukayo Saka will sign a new contract in the near future, putting to bed speculation over his future.

The England star has become a key player at the Emirates and the club wanted to reward him with a new deal to tie him down. Several Premier League outfits were sniffing around including Liverpool and Manchester City but Arteta has insisted Saka is going nowhere.

“We will try and we both have the same intention and it’s a matter of time,’” Arteta told reporters.

Saka’s current deal expires in 2024, which gives Arsenal some breathing room. However, talks have been ongoing for much of the year and a deal has been prioritised to avoid any chance of a situation growing.

Zlatan Ibrahimovic to play on past 41 after extending Milan contract

Evergreen AC Milan striker Zlatan Ibrahimovic will stay at the Serie A champions beyond his 41st birthday after agreeing a one-year contract extension, the club said on Monday.

Details of the contract were not released, but a source close to the deal said the Swede has accepted a reduced salary given he will be unable to play until 2023 after undergoing surgery on his left knee in May.

“AC Milan is pleased to announce the renewal of Zlatan Ibrahimovic’s contract until June 30, 2023,” Milan said in a short statement. “The Swedish forward will continue to wear the number 11 shirt.”

Although his second stint at the Italian side has been riddled with injuries, Ibrahimovic has made 74 appearances and scored 36 goals in all competitions since his return, helping Milan win their first Serie A title in 11 years last term.

A potential shock return to Madrid could be on the cards as Cristiano Ronaldo has reportedly convinced Diego Simeone to sign him for Atletico.

Ronaldo has made no secret of his desire to leave Manchester United to play Champions League football and Atleti fit the ball, despite the 37-year-old being a legend for fierce rivals Real Madrid.

The market for Ronaldo has not been as robust as the Portuguese might have hoped for with Chelsea and Bayern Munich having ruled themselves out and the forward rejecting a lucrative offer from an unnamed Saudi Arabian club.

Spanish outlet Diario AS are now claiming he could be about to return to the Spanish capital with Atletico.

Manchester United have reached an agreement with Ajax for the £47 million transfer of defender Lisandro Martinez that could rise to £55m.

The Argentina centre back will become new United manager Erik ten Hag’s third summer signing at Old Trafford, subject to a medical, and is set to sign a five-year contract with the option of an additional year.

Ajax confirmed in a statement that the deal includes another £8.5 million in potential add-ons for the 24-year-old international.

Ten Hag coached the defender at Ajax last season and Martinez follows Tyrell Malacia and Christian Eriksen in joining the club this summer.

Manchester United said: “Manchester United is delighted to announce the club has reached agreement with Ajax for the transfer of Argentine international defender Lisandro Martinez, subject to medical, to player terms being finalised, and to UK visa requirements.”

The 24-year-old is set to sign a five-year contract, subject to a medical, player terms being finalised and visa requirements