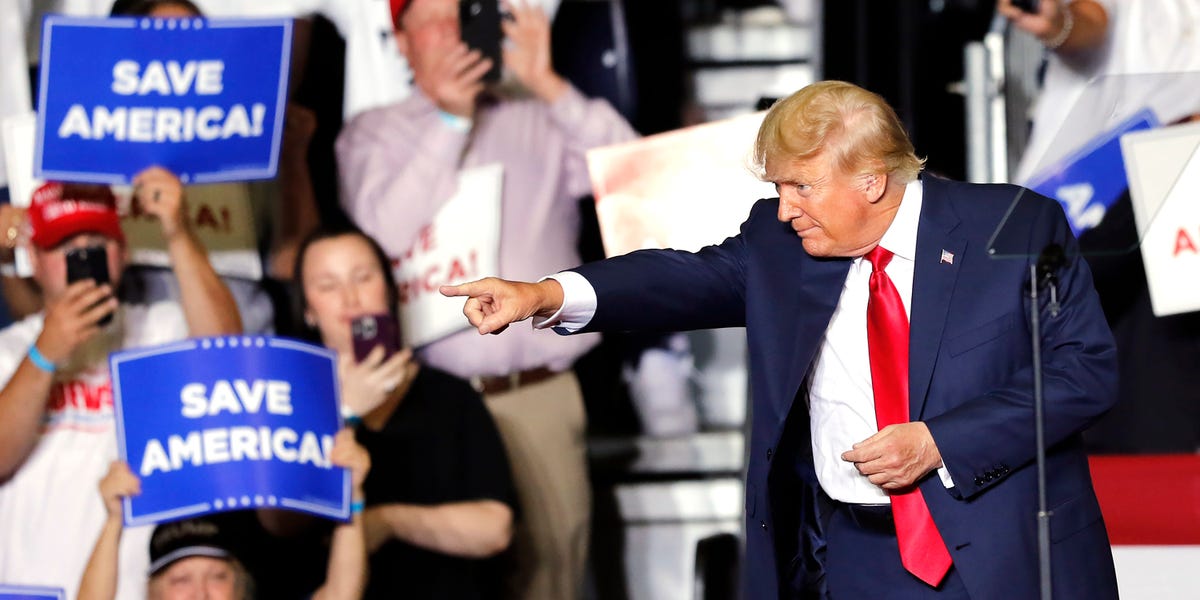 Speaking at the 7,000-seat Covelli Centre in Youngstown, Trump — who himself schemed in an effort to overturn the 2020 election — claimed that shrinking gas prices are a ploy Biden is using for political gain.

In a tweet, the White House recognized Saturday as the 95th day in which gas prices have steadily declined since reaching record highs earlier this year. According to the White House, the national average for a gallon of gas sits at $3.68.

The administration — and Biden himself — have claimed that the drop in prices is the steepest decline in more than a decade. Insider was unable to independently verify the claim.

Trump slammed Biden for going into the US Strategic Petroleum Reserve to release crude in an effort to ease overpriced gas despite the reserve being “only for war.” But Trump did the same during his administration when Saudi Arabia’s crude production drastically decreased following attacks on its production facilities, per CNBC.

“He’s using that to keep prices down as much as he can just before the election and right after the election, it’s going to double up and go higher than anybody ever believed,” Trump claimed at the rally on Saturday.

Trump claimed the current average is still “double and triple” what it was during his administration.

The Associated Press reported the national average was as low as $1.87 per gallon during May 2020, but the outlet attributed the low cost mostly to the COVID-19 pandemic lockdown.

While the crowd cheered during Trump’s rant on the current status of gas prices, some supporters didn’t seem too bothered.

When an interviewer from Right Side Broadcasting Network pushed a woman clad in a pro-Trump hat to say the gas prices for her 5.5-hour drive were bad, the woman didn’t agree.

“Wasn’t too bad,” the supporter said of the gas prices.

A spokesperson for Trump did not immediately respond to Insider’s request for comment.