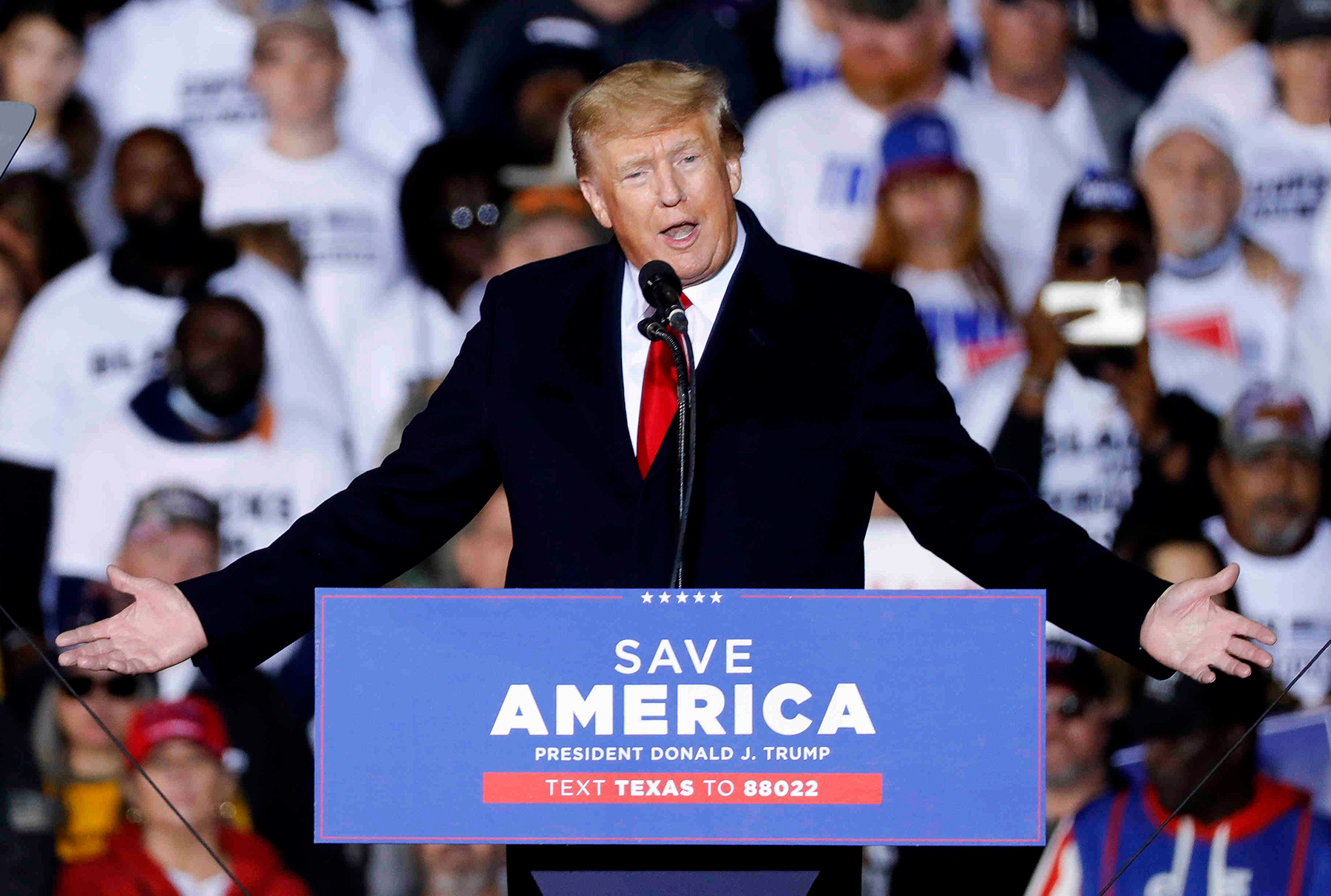 Donald Trump on Saturday night positioned himself as a law-and-order hardliner who knew that the key to keeping the country safe was to direct the full might of the state at undocumented immigrants, potential criminals, and anyone else who did not storm the Capitol on Jan. 6.

Near the end of a meandering, 80-plus-minute address to a “Save America” rally crowd in Conroe, Texas, Trump dangled the possibility of pardons for the insurrectionists who participated in a deadly breach of the Capitol aimed at disrupting the peaceful transfer of power from one president to the next.

“If I run, and if I win, we will treat those people from Jan. 6 fairly. And if it requires pardons, we will give them pardons, because they are being treated so unfairly,” Trump told a massive crowd, claiming that many people had asked about it.

Trump’s pledge of leniency came at the end of a speech in which he returned to his favorite theme: the dangers posed by undocumented immigrants and the need for harsh treatment of them.

As he has in all of his political campaigns, Trump fixated on illegal immigration, claiming Biden and Democrats had thrown open the United States to an “invasion” and that “countless lives” were being lost thanks to undocumented immigration. (He would, a few minutes later, declare the nation was “moving on” from Covid, which The New York Times reports killed around 3,769 Americans on Friday alone.)

As part of his effort to whip up anti-immigrant fervor, Trump compared undocumented immigrants to snakes, using them as a stand-in for the serpent in his oft-repeated poem about a “tenderhearted woman” who rescues a half-frozen snake only to get fatally bitten. The poem concludes: “‘Shut up, silly woman,’ the reptile said with a grin. ‘You knew damn well I was a snake before you took me in.’”

“And that’s what’s happening to the United States with immigration,” Trump said as thousands of people cheered.

Railing against undocumented immigrants has been Trump’s go-to message since June 2015, when he simultaneously announced a presidential run and claimed that Mexican immigrants were “bringing drugs, bringing crime” and were “rapists.” (At the time, he was best known as a has-been reality television host who’d kept himself in the public eye by becoming the promoter-in-chief of the lie that the first Black president had actually been born in Africa.)

A family of immigrants from Venezuela walk near the U.S. border wall after crossing from Mexico through a nearby gap in the fence in Yuma, Arizona.

Some top Republican officials have exhorted Trump to focus on retaking control of Congress in the next election, rather than dwelling on the one he already lost. And in the first hour of his speech on Saturday, Trump largely delivered, blasting Biden while pushing supporters to vote for the state and local officials he has endorsed. But totally eschewing mention of 2020 would require a modicum of discipline, or grace, or civic responsibility. Trump, as per always, possessed none of those in sufficient quantity to counter his overwhelming need to talk about himself. And so as the speech went on, his grievances drifted into the personal.

“The 2020 election was rigged, and everyone knows it,” Trump said. “You know who knows it more than anyone else? The Democrats.”

Trump lost the Electoral College count by 64 votes and the popular tally by more than 7 million.

Focus has never been a hallmark of Trump’s speeches, and his rhetorical meandering touched on all the pleasure centers of the modern MAGA online mind. He bemoaned and smirked at transgender college athletes. He stoked fear about critical race theory. He accused federal prosecutors who are looking into his business dealings of being “sick” and “racist.” He lied about climate change and mocked those who take it seriously. And, broadly, he served up the type of incoherent word salad that would be shocking were it not so utterly familiar.