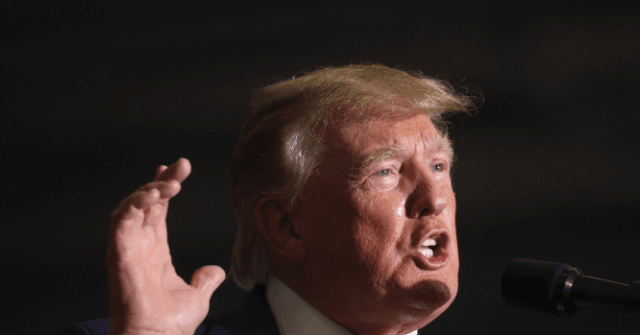 Former President Donald Trump called on Republicans to make it unlawful for employers to fire unvaccinated employees if the GOP regains a majority in Congress after the November midterms.

“One of the first things that we will do with our new Republican majority is to end every last covid mandate. They’re still around, it’s hard to believe,” Trump told a crowd in North Carolina on Saturday evening. “We will pass a bill making it illegal for any employer to interfere in personal health decisions or to fire employees simply for not having the vaccine.”

Trump vows to end ‘every last Covid mandate’ and pass legislation making it illegal for employers to fire workers for not having the vaccine pic.twitter.com/e2kMfDU99N

Trump also called on Republicans to investigate Democrat politicians who collude with teachers’ unions to keep parents out of their children’s classrooms:

A Republican Majority must investigate the collusion between Democrat Party politicians and the teachers unions to keep our children out of school for no scientific reason. The irreversible harm that Democrat politicians did to our young people is unforgivable—and American voters will punish them for it at the ballot box this November.

Trump went on to call out our “government-run education system” that “has forfeited the trust of America’s parents.” He said:

By replacing Reading and Math with pronouns and gender studies, our government-run education system has forfeited the trust of America’s parents. Every mom and dad in America must be given the right to opt out of the indoctrination, and send their child to the public, private, charter, or religious school of their choice.

He also called out President Joe Biden’s recently proposed defense budget for being full of woke provisions that amount to “nothing more than government-sponsored racism.”

“Last week, Biden sent Congress a budget crammed with billions of dollars for transgenderism and so-called equity provisions that are nothing more than government-sponsored racism,” Trump said. “A Republican Congress will end the woke War on Women and Children, we will stop illegal government discrimination, and we will restore the sacred American principle of Equality Under the Law.”