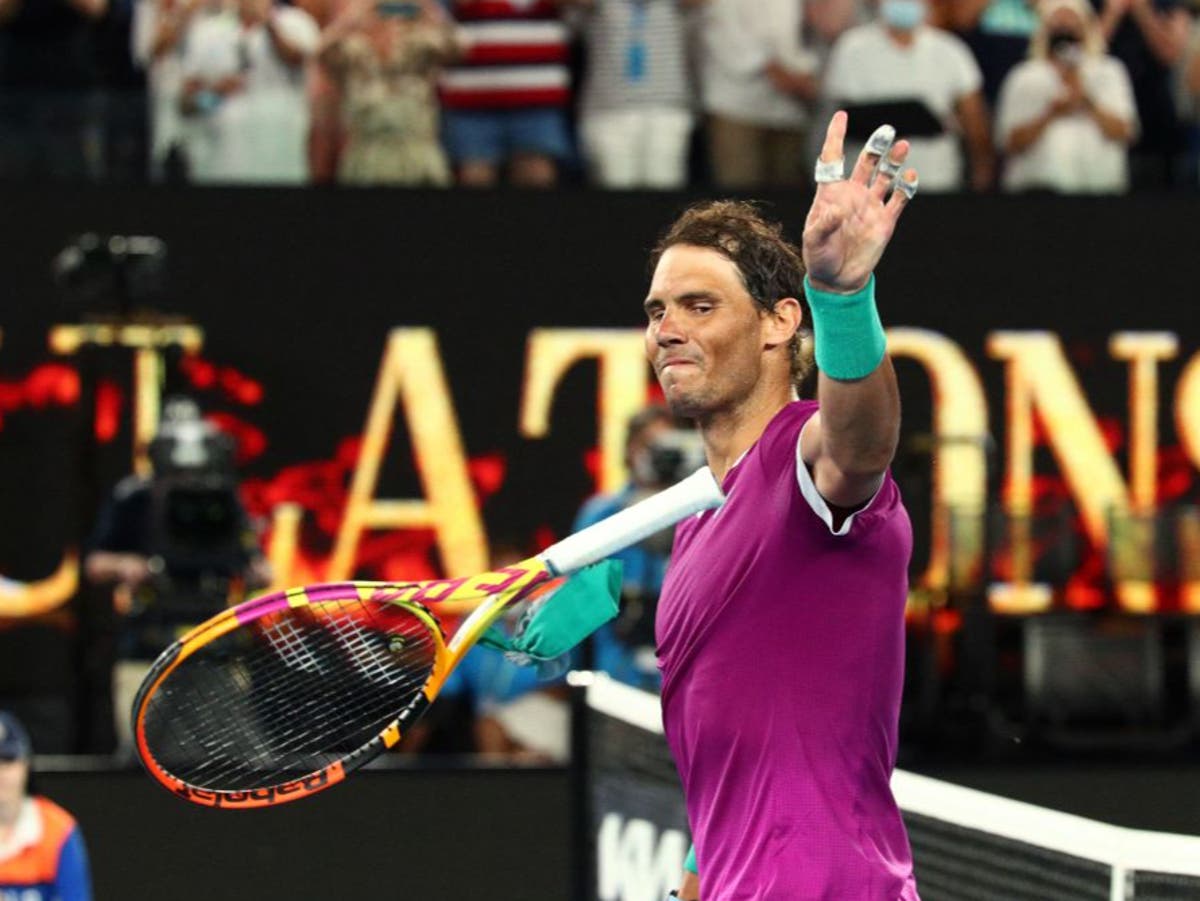 Medvedev ponders ‘what Novak would do’ to inspire Auger-Aliassime comeback

Medvedev is aiming to reach his second successive grand slam final following his victory at the US Open in September. The Russian fought from two sets and match point down to defeat Felix Auger-Aliassime, revealing afterwards that inspiration from Djokovic had helped him turn the match around. Tsitsipas, last year’s French Open finalist, produced his best performance of the tournament in the quarter-finals to sweep aside the in-form Jannik Sinner in straight sets. The Greek has a 2-6 record against Medvedev – including a straight sets defeat to the Russian in the Australian Open semi-finals last season.

Nadal remained on course to win a record-breaking 21st men’s grand slam title earlier on Friday as he defeated Matteo Berrettini in four sets. It was billed as a tough match for the 35-year-old, but his victory was emphatic and marks his first appearance in a final at a major since winning the French Open in 2020.

Follow for live updates and scores from the semi-final matches:

Tsitsipas is coming off his best performance of the tournament having found his best form to defeat the in-form Jannik Sinner in the quarter-finals.

Tsitsipas came into the Australian Open with uncertainty over his form and fitness following elbow surgery and has come through some tight matches, especially his fourth-round victory over Taylor Fritz.

Young Italian Sinner, seeded 11th, was expected to provide Tsitsipas with his biggest challenge of the fortnight but the Greek was in total control from the start and eased to a 6-3 6-4 6-2 victory on Wednesday.

It is the third time in three years that the 23-year-old has made the last four and he will look to emulate his run at the French Open last summer, when he reached his first final before losing to Novak Djokovic.

“We’re just getting started,” Tsitsipas said post-match. “It’s too early to decide whether it was [my best match in 2022] or not, but it was a great performance from start to finish with no doubt and a clear game plan.

“So far it has been the most consistent and the best match I’ve had on the tournament. knew I was going to face a Jannik who was hungry and who wants to show his best out there.

“I was really fired up myself to bring the best out of my game today, and I tried to get my level as high as possible because I knew that I need to form that kind of standard from early on.”

After Rafael Nadal progressed to a sixth Australian Open final after progressing past Matteo Berrettini, attention now turns to the second semi-final of the day between Stefanos Tsitsipas and Daniil Medvedev.

It’s set to be another cracker, as Tsitsipas looks to advance to what would be a second grand slam final and Medvedev aims to continue his bid to win back-to-back majors following his US Open win in September.

And to add to the drama, Tsitsipas and Medvedev have a frosty relationship, having clashed on the court earlier in their careers.

“We haven’t really spoken in the last couple of months, but our relationship is competitors on the court and kind of fighting for the same dream,” Tsitsipas said ahead of his ninth career meeting with Medvedev. The Russian has won six of those meetings, including the semi-finals here last year.

If you missed Daniil Medvedev’s epic five-set quarter-final against Felix Auger-Aliassime, there should just be enough time to watch the extended highlights.

“Well, as everybody knows I am more an outdoor than indoor player. But, yeah, I think the stadium looks amazing like this closed with the amazing crowd like this is even more noises, I enjoy the atmosphere a lot. I can’t complain at all.I knew before the match that the roof is going to be closed. You know what, a month-and-a-half I didn’t know if I was going to play tennis. It doesn’t matter if it is outdoors or indoors today. I just wanted to play and do my best.”

Welcome to The Independent’s live coverage of the Australian Open as the second men’s semi-final gets underway in Melbourne.

If you’re only just waking up, Rafael Nadal is already through to the final after defeating Matteo Berrettini in four sets. The win takes the 35-year-old Spaniard to within touching distance of a men’s record 21st grand slam.

He will face either Daniil Medvedev or Stefanos Tsitsipas in the final on Sunday, with the pair’s match set to get underway shortly on Rod Laver Arena.

Having scraped through a five-set contest with Denis Shapovalov in the quarter-finals, there were doubts over how well Nadal would have recovered.

Playing under the roof on Rod Laver Arena while thunder rolled around Melbourne, the Spaniard was in complete control for two sets and recovered from losing the third to claim a 6-3 6-2 3-6 6-3 victory.

Nadal, who feared a foot problem last year would end his career, is now only one match away from becoming the first man to win a 21st grand slam singles title.

The 35-year-old, whose only Australian Open title came back in 2009, said: “I started the match playing great, first two sets have been one of the best since a long time.

“I know how good is Matteo. In the third I knew at some point he’s going to go for the shots. I think I didn’t play a good game with my serve but he played some great shots.

“Then we need to suffer and we need to fight. That’s the only way to be where I am today. It means a lot to me to be in the final again here.”

Seventh seed Berrettini began nervously in his third grand slam semi-final and found his weaker backhand ruthlessly exploited by Nadal, who seemed to be cruising into the final.

Berrettini, the beaten finalist at Wimbledon last year, did not manage to apply any pressure or force his opponent to leave his comfort zone for two sets but in the third things slowly began to turn.

The Italian had played Nadal once before, at the US Open in 2019, and had not created a break point. Finally he managed it in the eighth game of their sixth set.

Berrettini has one of the biggest forehands in the game and a memorable running pass helped him to 0-40 before he clinched the break with another winner.

Nadal had been dominant against Shapovalov at two sets to love up before things became extremely complicated, and the sixth seed was looking significantly less sharp physically early in the fourth.

He dug deep to stay on terms and, when he sensed an opening on the Berrettini serve, he pounced, the Italian saving one break point at 3-4 after the rally of the match only to dump a forehand in the net on the second.

Berrettini has not yet beaten a top-10 opponent at a slam, and the 25-year-old clearly has areas of his game to work on, but this was Nadal’s day.

On the chance of making history with his 21st slam title, Nadal said: “For me it’s all about the Australian Open more than anything else. It’s an amazing event. I’ve been unlucky with a few injuries. I was close a couple of times. I never thought about another chance in 2022.”