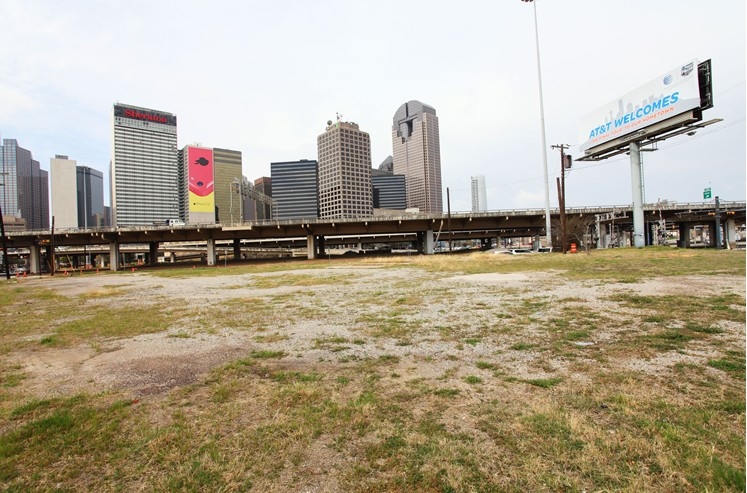 The Texas Department of Transportation believes the elevated I-345 highway should be buried in a trench between downtown and Deep Ellum, restoring connectivity by way of the existing at-grade city streets; the agency didn’t go so far as to recommend replacing the freeway with a boulevard.

TxDOT unveiled this “preferred alternative” during a public meeting Tuesday evening at the St. Philips School and Community Center after winnowing down five construction options to one. The winner is called the “hybrid alternative,” which the state believes is a compromise between groups that wanted to tear out the freeway and others who argued for a status quo repair of an aging traffic corridor that connects interstates 30, 45, 35, Central Expressway, and Woodall Rodgers. The trench will be about 65 feet deep.

But that traffic corridor occupies 1.4 miles in the core of the city, on the east side of downtown. The highway opened to traffic in 1974 and is nearing the end of its life, presenting the city with a unique opportunity to rethink the enormous spread of concrete that occupies land that could otherwise support development. When it was constructed, the highway gashed Deep Ellum and cut it off from downtown.

This magazine sparked a conversation about removing the highway in 2014, when the urban planner and current DART board member Patrick Kennedy wrote a story titled “Why We Must Tear Down I-345.”

“People are clamoring to move to an urban neighborhood, but an elevated highway stands in their way,” read the subhead of that story.

Under the hybrid plan, the “urban neighborhood” would sprout on decks over the freeway similar to the infrastructure of Klyde Warren Park. TxDOT has identified 11 areas over I-345 that could be decked at-grade and would be able to house buildings or “deck plazas.” Those areas total about 8.5 acres, stretching from Canton Street past the exit to Woodall Rodgers Freeway. The hybrid plan will also create 7 acres of surplus right of way aside the buried highway.

But the state does not plan to pay for those decks. The funding for capping 345 will have to come from other public sources, be that federal grants, the North Central Texas Council of Governments, or the city itself. Getting the money to put these decks over the freeway will likely require creative maneuvering, but the U.S. Department of Transportation has included language in grants that prioritizes projects that reconnect neighborhoods. It’s not clear how much those decks will cost, but the state expects the base project to be about $1 billion. If everything goes smoothly, construction won’t start until 2027 or 2028.

TxDOT district engineer Mohammed “Mo” Bur says that the air rights can be leased to allow for buildings in these spaces. Removing the freeway is likely off the table, TxDOT says, because of traffic models that show an additional 19,000 hours of congestion each weekday. The state estimates average increases of 40 percent to 50 percent in weekday congestion for drivers if the highway wasn’t there. (Ceason Clemons, a deputy district engineer at TxDOT, says those numbers were calculated by using traffic models created by the NCTCOG. It also used anonymous Bluetooth data to track how drivers used the highway, finding most of its trips were coming from Dallas residents, not freight cutting through the city.)

“Everybody perceives it pretty much as a barrier,” Clemons says. “We don’t think the removal is the right way to go, mainly because of the impacts to traffic.”

New at-grade connections between downtown and Deep Ellum will include Good Latimer Expressway, Cesar Chavez Boulevard, Canton, Commerce, Main, Elm, and Pacific streets. Live Oak and Ross will also fly over the highway. TxDOT plans to design each of those with “Complete Street” elements, including protected infrastructure for pedestrians and cyclists, Clemons says. (Final design will be worked out later.)

DART’s Green Line would be at the same depth as the highway and the planned D2 subway would run adjacent. Carpenter Park will lose its basketball court, but is otherwise unaffected. (Those portions of the park could be rebuilt above the highway.)

There will be no frontage roads onto 345, and the cumbersome ramps will disappear. It becomes more of a pass-through for drivers traveling to the adjacent highways. TxDOT also plans to design exits earlier on Woodall to split traffic so that drivers heading to I-30 or Central Expressway don’t have to bob and weave across the highway.

“Our intent from day one was … to separate this traffic as quickly, as early as possible,” Bur says.

So why not pursue a full removal? The answer may be in San Antonio. In 2014, TxDOT gave the city permission to shrink 2.2 miles of Broadway Avenue just off Interstate 35, effectively removing it as a connection of the state highway system. According to the San Antonio Report, voters approved $42 million in bond funding to transform this portion of Lower Broadway into a meandering boulevard accented with development. To do so, the city needed to remove two of its six lanes.

In January, the Texas Transportation Commission—TxDOT’s board of commissioners, which approves funding for transportation projects—voted to rescind its offer to hand over Broadway, saying the thoroughfare “continues to be needed for state highway purposes.” The commissioners are prioritizing traffic capacity.

The question is, if San Antonio can’t get a road diet approved for an old highway, what are the chances TxDOT allocates funding and approves removing I-345? That’s where the compromise is: the highway stays, but some development can still happen. For the record, Bur and Clemons never brought up the Broadway project, but the matter shows how difficult it can be for cities to rethink the transit corridors that have existed for decades.

There is also the matter of public support. TxDOT says 66 percent of about 1,000 respondents from its public meetings and online surveys expressed a desire to keep the freeway. During its early public meetings in 2019, the state received feedback from 847 people: 27 percent wanted the highway to stay the way it was, 31 percent wanted it sunken, and 27 percent wanted it gone. Democratic state Sen. Royce West has been very clear that he wants that freeway to stay in some form. Michael Morris, the transportation director for the NCTCOG, has said his preference is burial, not removal.

Now, TxDOT will seek official resolutions of support from the Dallas City Council, DART, and other public bodies. Construction is a long way off. If the hybrid alternative gets support, TxDOT’s environmental study will take about two years to complete, Clemons said. The Texas Transportation Commission will have to include it in its 10-year plan, which is where the state allocates money for large transit projects. If there are no hiccups, the earliest construction will begin will be 2027, Bur said.

But the state finally has its preferred alternative. And now the discussions begin. You can head here to tell the state what you think.