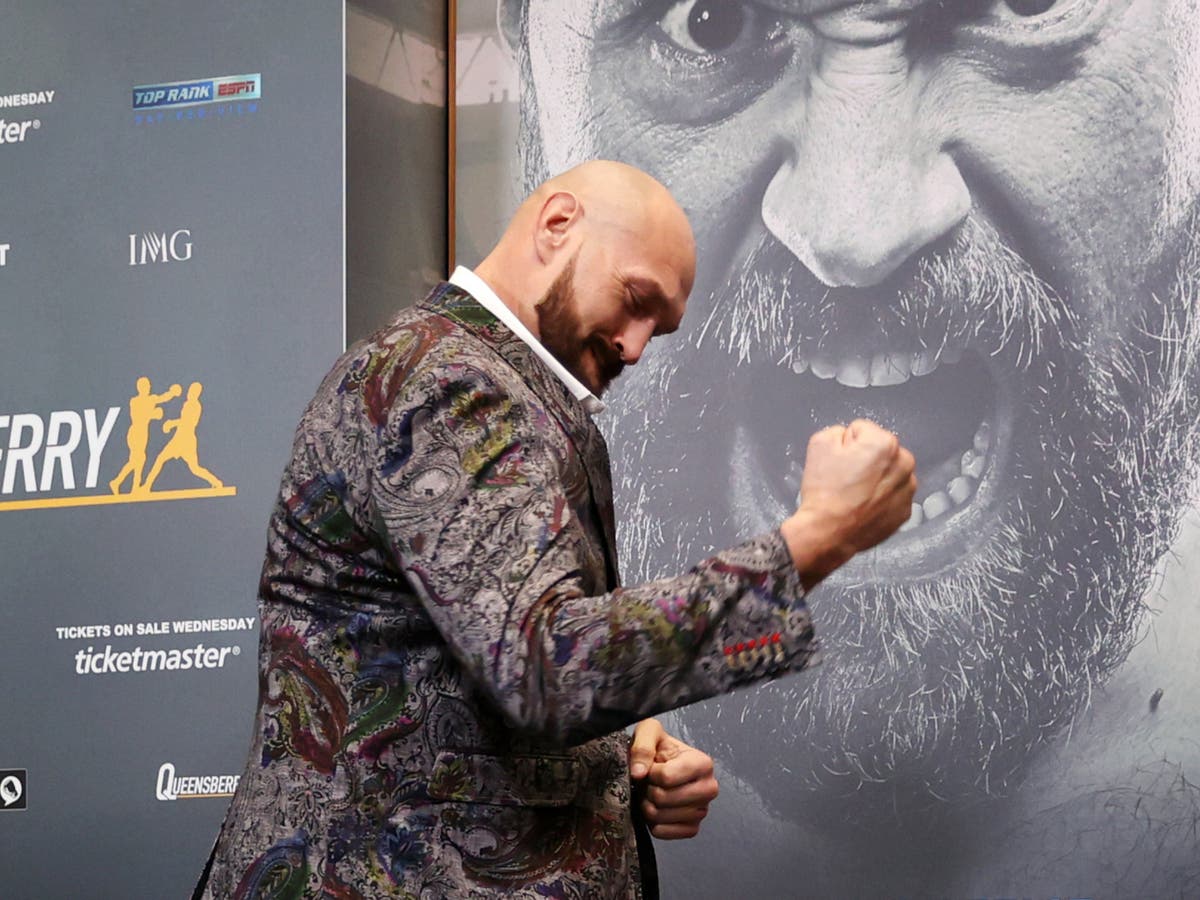 Tyson Fury taunted opponent Dillian Whyte for skipping the pair’s pre-fight press conference on Tuesday, insisting that fighting his own “shadow” would “sell”.

WBC heavyweight champion Fury will put his belt and unbeaten record on the line on 23 April, when he faces mandatory challenger and interim title holder Whyte at Wembley Stadium – where Tuesday’s press conference took place.

The bout marks Fury’s first contest on home soil since 2018, with the Briton having fought exclusively in America in the years since. The 33-year-old looks set to do the bulk of the promotional work for the fight against his compatriot, with Whyte, also 33, having remained in Portugal on Tuesday to focus on his training.

“I will chop him to bits, not a problem,” Fury said of his former sparring partner on Tuesday. “I will smash his face right in.

“If I’m daft enough to get hit off him and knocked out, then I don’t deserve to be world heavyweight champion.

“He should be here kissing my feet, washing my feet, because I’m giving him 32-times his biggest payday. He’s not Dillian Whyte, he’s Frillian White Knickers.”

Fury, who later did a face-off with an imaginary Whyte, with promoter Frank Warren even pretending to separate the pair, added: “Of course he doesn’t want to go face-to-face with me, because he’ll see that fire in my eyes and think: ‘I’m getting killed, I’m getting smashed to bits.’ It’s terror, it’s fear.

“[But] Tyson Fury versus his own shadow sells.”

Fury did, however, express some disappointment around Whyte’s absence.

“I think it messes up his legacy a little bit as well,” the “Gypsy King” said. “In years to come they’ll see it was a really good fight, he didn’t have any involvement in any of the build-up, not in any of the photographs, there will be no old magazines to look at.

“I think it’s a shame not just for him but for his kids and family to look back on in time as well.”

Warren, meanwhile, did not hold back in criticising Whyte for failing to attend the press conference.

“It’s unfortunate he isn’t here today,” the 70-year-old said. “He signed a contract, which he left right until the last minute, and now he’s trying to renegotiate.

“One of the things was that he wanted a private jet that would fly him in and out today, but we said yesterday we’d do that – in writing.

“Then they started adding other things to it. They didn’t even want us to use his image on a poster. I’ve never heard anything like it in my life.

“It’s just not right. He’s in Portugal, he should be here. It’s disgraceful that he’s not here, it’s not professional.”