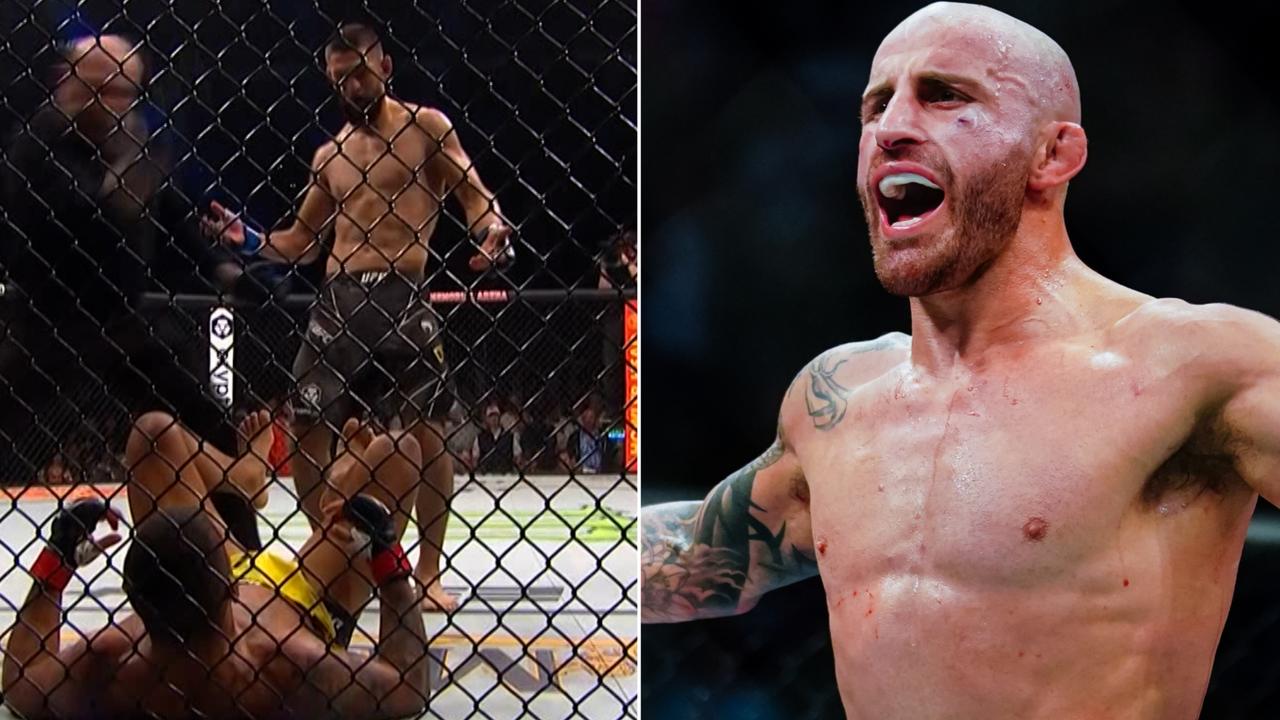 Australian Alexander Volkanovski will defend his featherweight title for the third time on Sunday (AEST) in Jacksonville.

This time, against Chan Sung Jung, also known as ‘The Korean Zombie’.

The main card has exploded into action with Khamzat Chimaev going at it in an unforgettable war with Gilbert Burns.

There were no belts on the line but both men traded blows relentlessly in a bout that had everything and sent the UFC world into a frenzy (watch in the video player above). Both fighters were rocked at times, but Chimaev was awarded a unanimous decision victory with all three judges scoring it 29-28.

MMA reporter Ariel Helwani said on Twitter “what a freaking fight. FOY (Fight of the Year) contender for sure. Everything we wanted and more”. Dwayne ‘The Rock’ Johnson added “Holy s*** what a fight!” while the UFC official account tweeted “The hype is real”.

Russian-born Swede Chimaev, boasting an 11-0 record in MMA and 5-0 in the UFC, has rapidly risen up the ranks in the UFC and is eyeing a shot at reigning welterweight champion Kamaru Usman.

As much as it was an emotional win for Sterling at the time, it was also unfulfilling, not the way he wanted to end up with the belt around his waist. This time a great fight went to the judges but Yan firmly believed he should have been the victor, with with all three scoring it 48-47 but only one in his favour.

For Volkanovski, this is another opportunity to cement his status as the best 145-pounder in the world, and one of the best pound-for-pound fighters in the organisation.

“I earned it, I deserve it, so I don’t have to feel like I’m being cocky by owning that crown that I deserve to wear,” he told reporters this week.

“I’m fighting absolute killers. I want to keep taking these guys out.”

Riding a 10-fight win streak in the UFC, Volkanovski has received real support in Jacksonville after his most recent victory over Brian Ortega, following a controversial two-fighter series with fan favourite Max Holloway that saw the Aussie come out unscathed.

For Zombie, it’ll be his first title shot in 3170 days (nine years); nearly a decade on from defeat at the hands of Jose Aldo.

“I’m happy for him that he got a title shot,” Volkanovski said.

“This is probably going to be his last title shot. I don’t want to say I’m looking past him like I’m cocky, but where I’m at right now, I can’t see myself being beaten.

“He’s been around forever. It’s a guy I’ve always wanted to fight, always thought I was going to fight. Zombie has been at the top of the game ever since this featherweight division has ever started.

“It’s a legacy fight. I’ve taken down a lot of the legends and I want to keep taking down legends. He’s definitely one of them. He’s earned this spot, he definitely has.”

Speaking on Sunday’s pre-fight coverage, Joe Rogan called Volkanovski an “absolute savage” and said he deserves to be the strong favourite.

“The man has gone through the fire over and over again, against Brian Ortega, against Max Holloway against Chad Mendes,” Rogan said.

“The man is an absolute savage and I think his mindset is one of his strongest assets. He has zero quit in him and all win”

The main card opened with Mark Madsen defeating Vinc Pichel via unanimous decision (30-27, 30-27, 29-28). The opening two rounds were relatively even and uneventful in the sense neither was able to gain the clear upperhand. Pichel opened up the fight with a low kick, with Masden returning and that carried on for the early stages of the round.

Pichel was able to land a pair of leg kicks and then soon after a right hand, yelling at Madsen: “You better watch out motherf***er” in a brutal warning. Madsen though responded with a takedown, although Pichel was able to get back up without much sustaining much damage.

Both went on to exchange punches and kicks before Pichel landed a late right hand at the end of the round. Madsen was able to land a takedown in the second round but again Pichel was able to get out and almost locked in a calf slicer.

That did not eventuate but Pichel was later able to hit Madsen with a flurry of punches, cementing the round late. In the end though, Madsen had the decisive third round after scoring an early takedown and staying in complete control for the remainder of the fight.

Pichel though was not impressed as he left the octagon, yelling: “You’re a f***ing pussy” at Madsen.

There was already drama in the preliminary fights, with Mike Malott making an instant impact in his UFC debut.

Malott scored a TKO win in the first round over Mickey Gall with a devastating left hook that sent his rival crashing to the canvas.

In a touching post-fight interview, Malott revealed he would be donating his entire show money ($10,000) to the family of a 15-year-old who is currently battling cancer.

Elsewhere, the Ian Garry hype train has continued to charge along, although this was a much tougher bout for the 24-year-old, winning via unanimous decision over Darian Weeks.

Garry (9-0 MMA, 2-0 UFC) said post-fight he obviously would have preferred to have finished Weeks but saw plenty of positives out of going the distance.

“It’s 15 minutes in the cage, I ain’t happy with it. I like finishing fights, but it’s experience. As I’ve said before, I ain’t perfect yet, but I’m getting there,” he said.

Joe Rogan said the same in commentary for ESPN.

“When you have a young prospect like Garry, these are the kind of fights you want to see. You don’t want to all see blowouts,” he said.

“You want to see a guy like Weeks, you is tough as nails, physically strong and presents a lot of problems and you get to learn what this 24-year-old kid is capable of. It’s a very valuable lesson, win, lose or draw.”

Meanwhile, she took the fight on nine days notice but Raquel Pennington showed few signs of rust in a unanimous decision win over Aspen Ladd.

Pennington revealed post-fight that she actually broke her left hand in the first round blocking a kick from Ladd.

It is Pennington’s fourth-straight win in the octagon and means she now owns the longest active UFC win streak in the bantamweight division.

Her 10 wins in the division are also the second-most behind Amanda Nunes (11).

Pennington called out Sara McCann post-fight, telling her: “Sara I have a lot of respect for you, I’ve always admired you as a person and an opponent, but I think we should settle this for a title shot.”

Earlier, Aleksei Oleinik proved age is no barrier to dominating in the heavyweight division, submitting Jared Vanderaa in the first round.

Oleinik, who is 44 years old, found early success on the ground and finished the fight early with a ‘Boa Constrictor’ which forced Vanderaa to tap out.

When asked how much longer he can continue, Oleinki cheekily responded: “Not too much. Maybe five or 10 years”.

Oleinik first MMA win came back in 1996 with the latest win his 47th by submission.