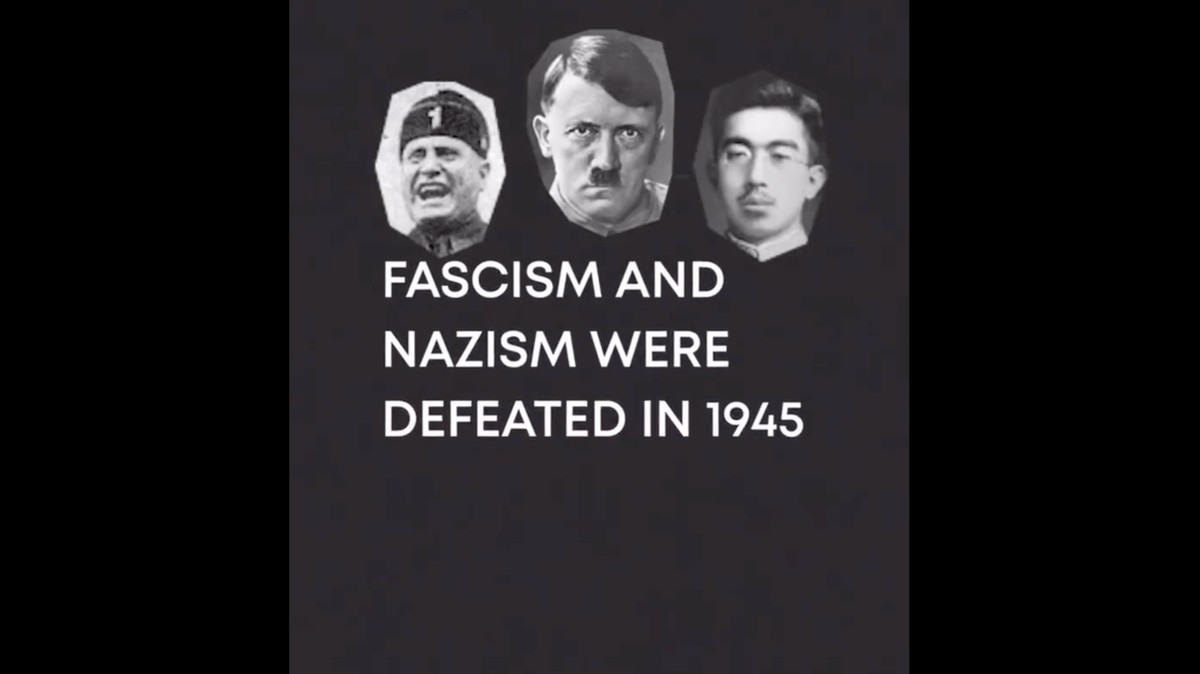 In the original video, the Shōwa Emperor is placed alongside two dictators, Adolf Hitler and Benito Mussolini. Photo: @Ukraine via Twitter

TOKYO — The Ukrainian government has apologized for tweeting a video featuring a picture of Japan’s wartime emperor, Hirohito, alongside Adolf Hitler and Benito Mussolini, renewing a debate on the Japanese monarch’s responsibility for the country’s World War II atrocities.

Ukraine’s official account deleted the video on Sunday and said it had “no intention to offend the friendly people of Japan” following a protest by the Japanese government. A senior Japanese official on Monday called the now-deleted video, which was posted on April 1, “inappropriate and extremely regrettable.”

The video was meant to be a social media campaign condemning fascism and the Russian invasion of its neighbor, for which Japan has sanctioned Moscow.

The Ukrainian government has deleted the original tweet and posted a new version of the video without any Japanese figure, but the removal has ignited a debate about whether it was wrong to compare fascist leaders to Japan’s wartime emperor, who was head of state during Japan’s imperial expansion and militarization.

Emperor Shōwa, widely known as Hirohito, ruled Japan from 1926 until his death in 1989, including the period from the invasion of China in 1937 to the end of WWII in 1945 when Japanese soldiers killed 3–10 million people. But some historians and officials argue that he was a mere figurehead and lacked real power, thus void of responsibility for the country’s actions.

Masahisa Sato, the head of the ruling Liberal Democratic Party’s foreign policy panel, tweeted that he urged the Japanese foreign ministry to protest the video posted on Ukraine’s official account. “Japan’s Ministry of Foreign Affair needs to get it together and do a better job” in preventing such videos, he said.

The Ukrainian embassy in Japan also distanced themselves from the original Ukrainian tweet, saying that the creators of the video lacked “historical awareness.”

But others have disagreed and said it’s historically accurate to group the emperor with Hitler and Mussolini.

“[The] Japanese feel uncomfortable with him being likened to Hitler and Mussolini, two dictators, as they find the then prime minister, Tojo Hideki, more similar image-wise” to the German and Italian leaders, Akira Yamada, a professor at Meiji University who studies Japanese modern history and its imperial system, told VICE World News.

“But he was the head of state, so from an international and legal standpoint, it isn’t wrong to place him side by side,” he said.

Yamada argued that it is wrong, as many loyalists do, to absolve Hirohito of Japan’s wartime atrocities by claiming he didn’t know the full extent of Japanese militarism.

“He was the only one in Japan who had complete power over the army and navy—he was well aware of what was happening, but believed it couldn’t be helped because they were in the midst of war,” he said.

During WWII, Japan invaded China as part of its plans for imperial expansion and search for natural resources. At the beginning of this invasion, Japan also carried out mass killing and ravaging of Chinese civilians—now known as the Rape of Nanking—over a six-week period. By the time the war ended, China had suffered 15 million deaths.

In Japan’s occupied territories, which include South Korea and the Philippines, the Imperial Japanese Army also forced women and girls into sexual slavery and euphemistically called them “comfort women.”

Unlike other Japanese officials, Hirohito was exempted from prosecution of war crimes following Japan’s defeat. Later documents would also show how he had wanted in 1952 to express regret and remorse for Japan’s actions during WWII, but was stopped by the prime minister at the time.

The Japanese narrative around Hirohito’s culpability—or the lack thereof—was shaped also by the U.S.-led forces that occupied Japan following the war, which sought to preserve Japan’s national identity, said Yusuke Suzumura, an associate professor of political history at Meijo University.

“After the war, the Allied forces kept Japan’s imperial system because they understood how devastating it’d be for the Japanese people if he were gone,” he told VICE World News.

“So many people in Japan learn that the former emperor was a figurehead, though he signed the papers allowing Japan to go to war,” he said.

Yamada at Meiji University also said that both Japanese and U.S. officials avoided blaming Hirohito for wartime atrocities because it would dishearten Japanese citizens. “Throughout the war, the Japanese people were taught that they had to sacrifice their lives for the emperor, so then to claim that he was wrong or he committed wrongdoings would mean all their sacrifices would be wasted,” he said.

After the official Ukrainian Twitter account deleted the video, the Japanese government accepted Ukraine’s apology and reassured the nation of its continued support in its war with Russia.

Japan has been staunchly supporting Ukraine since Russian President Vladimir Putin launched an attack in late February. It has imposed sanctions on Russia and sent non-lethal weapons to Ukraine, in a break from its usual pacifist stance.