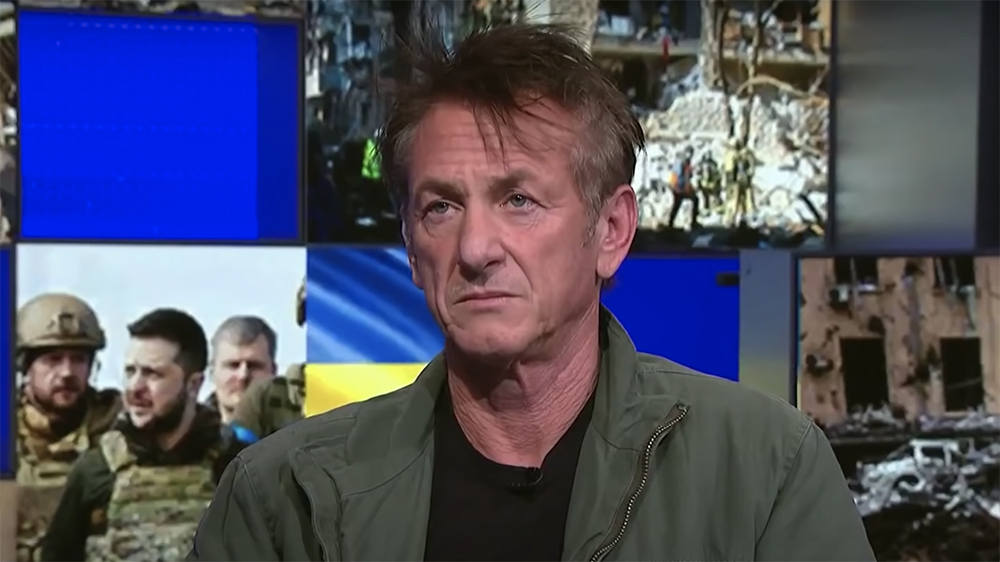 In a career that stretches back 40 years, Sean Penn has had many great roles, from Jeff Spicoli to Harvey Milk, from the surly teen sociopath of “Bad Boys” to the soulful death-row sociopath of “Dead Man Walking.” Yet there’s a role Penn is now playing that he has embraced with fierce commitment and skill, but it still doesn’t look very good on him. That’s the role of The American Civilian Who Cares About the War in Ukraine More Than You Do.

You’ve seen him play the role at press conferences and in interviews with cable-TV news hosts. Thatchy-haired and beleaguered, sitting there in his green CORE Army jacket brandishing his thousand-yard Method stare, his cigarette voice on the verge of cracking in literally every sentence, Penn, gripped with conviction, speaks in a deliberate, ever-so-slightly strangled monotone that makes it sound like he’s working hard to control everything he’s saying. Otherwise he might just bust a gasket of emotion, man!

He’s a great actor, and the message is clear: Sean Penn knows the stakes. He gets the gravitas, more than you and I put together. Penn, presenting his analysis of the Ukraine situation, lays out his case with a solemn awestruck once-more-unto-the-breach fervor, and it’s obvious, as you listen to him, that he knows a great deal. He’s got the detail at his fingertips ­— about how many weeks of training it takes to fly an F-15, about Level 4 Body Armor, about how two squadrons at a cost of $300 million could “end this thing.” Penn was in Ukraine shooting a documentary about the country and its travails back in November, when the Russian invasion was just a gleam in Vladimir Putin’s eye. He was there, as well, during the first few days of fighting, but was forced to leave for the safety of himself and his crew. He’s returned since to meet with the country’s president, Volodymyr Zelenskyy. You’ve heard of profiles in courage? Penn makes Zelenskyy sound like his BFF in courage.

I should say, right up front, that I’ve had incredible admiration for Penn in his role as activist and organizer.  Last year, the compelling documentary “Citizen Penn” chronicled his offscreen activities, notably his decade-long mission to improve the lives of the people of Haiti. As I wrote in my review, “He walks the walk, instead of just talking the talk. Where other celebrities preach about saving the world in self-righteous signifiers, he takes action by going on the scene (to Baghdad during the Iraq War, to New Orleans after Hurricane Katrina, to Haiti following the catastrophic 2010 earthquake), and by staying there long after the disaster-relief-volunteer-as-photo-op window has closed.” In going to Ukraine, Penn has taken serious risks, and he has, in general, devoted huge swatches of his life to helping others when too many entertainment figures are just looking for the next paycheck. At the same time, I pointed out “there’s a way that Sean Penn’s trouble-spot dedication can dovetail a little too exquisitely with his image, creating a kind of aging-James-Dean-of-the-killing-fields persona.”

The problem with his Ukraine activism, however, isn’t the persona. It’s what he’s saying. On Feb. 25, the day after the invasion, Penn, presenting himself as the moral conscience of the nation (ours), with a touch of Lincoln-meets-FDR-meets-JFK stentorian poetry to his words, said, “Ukraine is the tip of the spear for the democratic embrace of dreams. If we allow it to fight alone, our soul as America is lost.”

I like that first sentence; it captures the stakes of what Ukraine’s fight against Russia means for the world today. But I was no fan of the second sentence. By the time that Penn said it, President Biden had already committed America to supporting Ukraine in this war, and the media was already brimming over with analysis of what, exactly, the United States should do in response to Russia’s aggression. With Putin rattling the saber of a nuclear threat, the cooler heads that prevailed all appeared to agree: We cannot put troops on the ground. The risks are too great. Putin is too much of a loose cannon. (His decision to launch this cataclysmic horror of a war does not appear to be fully rational; so who knows how far his irrationality would extend?) No one was arguing that Ukraine should fight without the commitment — sanctions, weapons, the collective ostracizing of Russia — of the United States and most of the Western world. But waging the fight alone is what the people of Ukraine needed to do, and have done, with staggering courage and effectiveness.

But with that initial statement, the template of Sean Penn’s message had been set. He was in Ukraine, he saw what was happening, he had the gravitas to understand the magnitude of the moment, and he, therefore, could go on television and announce, with the fearless clarity of absolutism, what our policy should be. If we allow it to fight alone, our soul as America is lost. (And who, incidentally, would be doing this fighting? Sean Penn’s kids? Yours? Mine?)

The second act of Penn’s Ukraine drama arrived on the wings of the Oscars. A rumor was circulating that President Zelenskyy might appear on the Oscar telecast to make a statement about Ukraine. Penn, reflecting the image politics of Hollywood far more than he knew, seized on this possibility as a defining moral event, especially when it began to leak out that Zelenskyy, in all likelihood, would not be part of the ceremony. (He wound up on the Grammys instead.) “If the Academy has elected not to do it,” said Penn, “if presenters have elected not to pursue the leadership in Ukraine who are taking bullets and bombs for us, along with the Ukrainian children who they are trying to protect, then I think every single one of those people, and every bit of that decision, will have been the most obscene moment in all of Hollywood history.”

Really? More obscene than the ’50s blacklist? More obscene than the racism of “The Birth of a Nation”? Than the revelation of Harvey Weinstein’s long-enabled monstrousness? Than the fact that “Around the World in 80 Days” won best picture? For good measure, Penn added the actorly flourish, “I myself, if it comes back to it, when I return, I will smelt mine in public.” He meant his Oscar. Werner Herzog once threatened to cook and eat his shoe, and did, but that was a joke. If Sean Penn ever smelts his Oscar in public, I want a front-row seat.

The difference between Ukraine and the other trouble spots, like Haiti, that Penn has been to is that in those cases, in addition to offering humanitarian aid through the organization he founded, CORE (Community Organized Relief Effort), Penn was shining a light on crisis situations that needed more light. The mass media tended to dip in and out of them. From the start, though, the whole world has been watching Ukraine. In a way, Penn is preaching to the choir. Who doesn’t think that we should be helping Ukraine, or that the stakes of this war, in terms of the shape of our world, are anything less than elemental? If Penn simply agrees with the current American policy, then there’s no real point to his making himself a spokesperson. So implicitly he has to go further: to nudging the U.S. toward greater action.

Yet has he really earned the right to do that? Shooting his documentary, Penn has been an eyewitness in Ukraine, no more and no less, but he’s far from the only one, and he doesn’t possess any special knowledge of the logistics or the ethical dimensions that define this war. What he has is his self-appointed fervor, which in this case feels inseparable from the drama he instinctively cultivates as an actor. Offscreen, he has long been an embattled figure (his first war was against the paparazzi). He sees himself as someone who wants to make a difference, and that’s admirable — that is, until it becomes self-glorifying.

And frankly, I don’t want to see an actor, no matter how valiant his efforts at humanitarian relief have been, advocating for policies that could lead us closer to a nuclear conflict, all because it makes him feel like he’s seizing the day. Penn, to demonstrate his ability to rise above America’s ideological fractures, made a point of going on Sean Hannity’s Fox News show, even though he admitted he didn’t trust Hannity. “No one wants to see a nuclear conflict,” he told the right-wing host. “At the same time, if only one bully is going to be able to use those weapons as a threat, we gotta rethink what we’re doing.”

Okay, whatever that means. It sounds, frankly, like when it comes to Ukraine, Penn has a jones for speaking in terms of escalation, because that’s the strategy that best expresses the fervor of his commitment. Hannity, who Penn is right not to trust, started going on about how Democrats start wars (like Vietnam and Afghanistan) that they don’t have the stomach to finish. He talked about drones, Stinger missiles, MiGs. “Fight the war to win it,” said Hannity. “We agree,” said Penn. The actor added, in reference to Putin, “If there is a God, there will be vengeance beyond all possible comprehension.” I don’t doubt Sean Penn’s commitment, but if he wants to keep making public statements about the war in Ukraine, maybe he should think about sounding a little less like he’s in a movie.