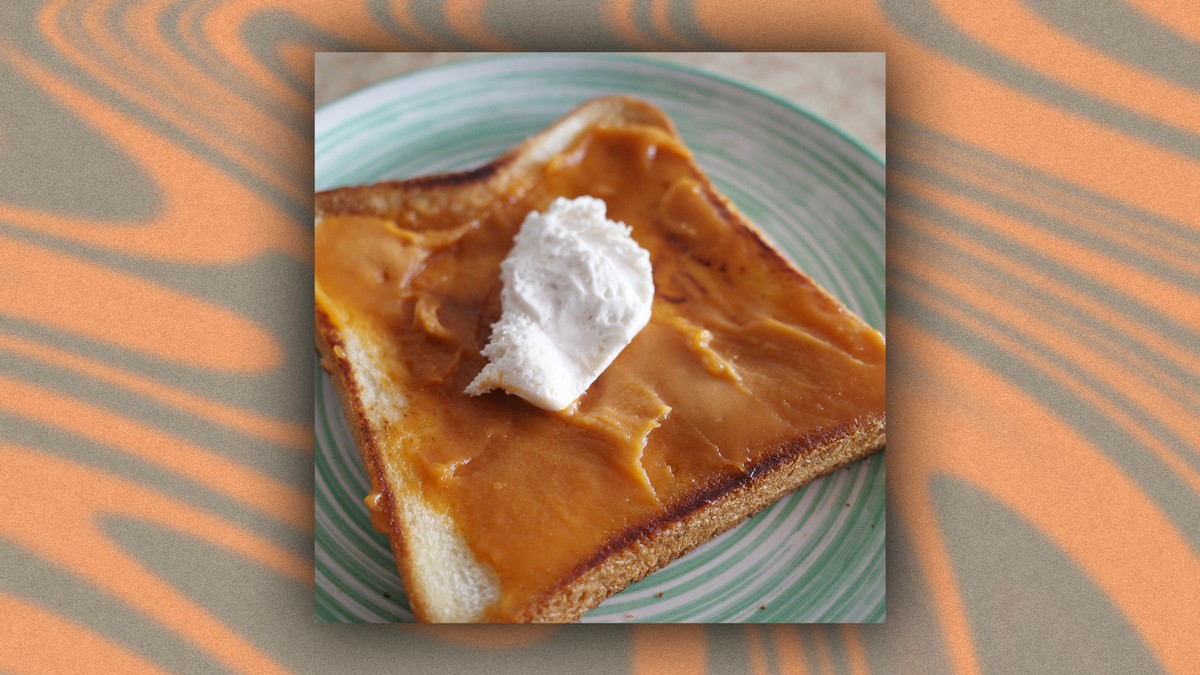 For several years, I lived in Los Angeles’ Thai Town in East Hollywood, and I think it’s fair to say that my Thai iced tea habit got a little out of hand. See, Thai iced tea is always a pleasure, no doubt, but the food in LA’s Thai Town in crazy-good (and famous for being such—shoutout to Jitlada, Sapp Coffee Shop, and Ruen Pair), and the Thai teas there are next-level—so creamy, rich, lightly spiced, and served over that wonderful tiny crushed ice that’s almost like a slushie. It’s dessert-like, but refreshing. Cooling in contrast with your bowl of boat noodles, but warming of the spirit. Dang, it rules.

So when I heard that Umamicart’s latest collab with Moon Man is a Thai tea jam, I couldn’t wait to bathe in it (figuratively). The Umamicart lords sent over a jar along with a loaf of Morning Selection, that super-doughy, amazing Japanese bread, and I basically did my version of a Fortnite dance when the box appeared at my door. Thai tea toast, let’s gooo.

The jam is really more of a dessert spread; it’s a Southeast Asian-style kaya jam, meaning it’s made with coconut milk, eggs, and sugar, and almost has the consistency of a spreadable custard or flan. Black tea is also a major ingredient of course, as well as warm star anise, tamarind, and cardamom to pack a powerful Thai tea flavor.

I don’t own a toaster—my countertop is… crowded—so I quickly toasted a slice of the Morning Selection in my Always Pan with a light coating of butter, and then slathered on the jam. Because I’m a freaky fluffernutter fan, I also added a dollop of marshmallow whip in the center. Y’all… this stuff is revelatory. It was tough to predict how such an iconic drink would translate into a spread, but it’s a dreamy, creamy experience that I look forward to repeating until I’m scraping the last bits of jam out of the jar. While it was fab on toast, I could also see mixing it into yogurt or ice cream, or spreading it on a warm croissant [eyes roll in the back of my head with such pleasure at the mere thought].

Moon Man has previously collaborated with Umamicart on a java palm sugar kaya jam, an ube kaya jam, and a pandan kaya jam. (A sampler pack of all three is actually on sale right now.) But one other thing that sets apart the new Thai tea jam is that it’s for a good cause; for every jar sold, Umamicart will be donating groceries to Heart of Dinner, a non-profit-sponsored program that delivers hot meals and food products to elderly members of New York’s Asian American community every week to combat food insecurity and isolation.

The Thai tea jam is available on Umamicart now, so get your paws on it before it sells out (which I feel confident it will, and soon). And grab some Morning Selection while you’re at it. It’s an absolute game-changer if you’re making a sweet toast (although it would also be awesome for extra-soft egg salad or meat sandwiches, like the ones you can get in many parts of Asia).