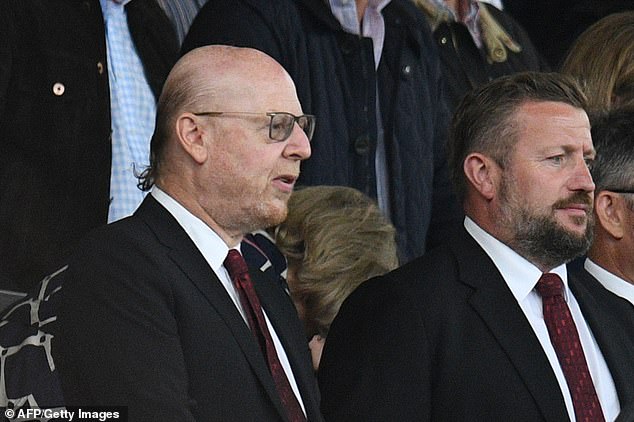 Manchester United‘s owners have earned an approval rating of just four per cent from the club’s fans.

In a survey of more than 100,000 fans of the 20 Premier League clubs, the Glazers attracted the least support of any set of owners.

The figure of four per cent of fans who felt the Americans were doing a good job was lower even than Mike Ashley’s approval rating among Newcastle supporters.

Only 10.8 per cent of fans approved of Ashley’s reign, with most of those citing his financial prudence. A huge majority felt he was a terrible owner and were happy to see him replaced by Saudi Arabia‘s sovereign wealth fund, PIF, last year.

The shockingly low approval for the Glazer family’s near 17 years in control at Old Trafford is a damning assessment. Supporters criticised the owners for taking ‘vast sums’ of money out of the club, poor recruitment of managers and players and their overall strategy.

They have also set transfer records, signing four of the 17 most expensive players in history Paul Pogba (for a world record fee), Harry Maguire (still the world’s most expensive defender), Romelu Lukaku and Jadon Sancho.

After the Glazers and Ashley, Everton’s Farhad Moshiri is the next worst-rated owner with an approval rating of just 14 per cent. Matthew Benham, at Brentford, has the highest approval rating among fans at 98.8 per cent.

Club chief executive Jon Varney told the MoS: ‘Matthew has been an exemplary owner. He is a committed, lifelong fan of the club, we are prepared to do things differently, taking calculated risks in the hope it will give us an edge.’

Manchester City’s Sheikh Mansour was voted the Premier League owner most damaging to the health of football, gaining almost 32 per cent of votes.

Newcastle’s new owners came second with more than 18 per cent, followed by the Glazers (18 per cent) and Chelsea’s outgoing Roman Abramovich (nearly 13 per cent).

City have won five of the last 10 titles and three of the last four. They have also become the richest club in the world by revenue, with their £571.1million income in 2020-21 leapfrogging Barcelona, Real Madrid, Bayern Munich, Manchester United and Liverpool.

City have been mired in financial controversies though during Sheikh Mansour’s reign, including twice being sanctioned by UEFA over Financial Fair Play.

They remain under investigation by the Premier League over undisclosed alleged domestic FFP infringements. That probe is about to enter a fourth year.

Consensus fan view: ‘He’s a Brentford fan. Focused. Plan from day one, carried it out. Learned from mistakes. Kept within means. Created a self-sufficient club.’

Detractor view: ‘Failure to seize opportunity of staying in the PL by making worthwhile signings while actively loaning out depth leaving us with little to no back-up.’

Consensus fan view: ‘He’s a fan and he cares … the whole club, top to bottom, is run entirely professionally; he’s financially prudent, and we have a sensible wage structure; his investments in the new stadium and training facilities are now paying off with team performance … in summary we’ve gone from near extinction to top half of PL.’

Detractor view: ‘Debt and one-man ownership does not guarantee stability.’

Return to PL after 16 years

Consensus fan view: ‘He brought us Bielsa … also impressive is the rebuilding of our youth ranks, the speed at which a rookie owner has taken Leeds to success, by gaining promotion, securing our place in the Premier League and retaining key players. Restoration of pride … he is the best owner we have had for years. He appears committed and long may this last.’

Achievements: Overseeing the return of Villa to the Premier League in first season.

Consensus fan view: ‘Significant turnaround in very short space of time. Investment in playing squad, academy and club infrastructure. Lots of fan engagement and clear communication from the CEO; they saved us and they have ambition to restore former glory and aren’t satisfied with circling the drain.’

Detractor view: ‘Spending lots of money but concerns over Steven Gerrard as a top-class manager.’

Achievements: 1 PL title, 1 FA Cup Consensus fan view: ‘Since they took over, we have skyrocketed to heights many thought were impossible. They have given hope and joy to thousands and contributed greatly to the community of the city; the football has been, at times, miraculous, and on a weekly basis they look after the fans.’

Detractor view: ‘I’m deeply uncomfortable about their links to a human-rights abusing regime in Thailand.’

Achievements: Have maintained their Premier League status for nine years.

Consensus fan view: ‘He’s overseen an unprecedented era of success in the Premier League while maintaining roots in the local community … we have a young, exciting squad which has potential for years to come. He hasn’t overspent during transfer windows; he’s investing in the academy and the stadium … never known the club this stable. As a Palace fan I’m used to lurching from one crisis to the next.’

Detractor view: ‘Steve’s views on the Crouch Report are disappointing.’

Detractor view: ‘Short-termism from the start led to a lack of stability for managers and players. High ticket prices prevent many going to games. Lack of redevelopment of facilities a concern.’

Consensus fan view: ‘The relative position from before they took over to where we are now speaks for itself. They have also facilitated me seeing the best players I have ever seen playing for the club; prudent financial management, innovative revenue growth streams, backing of youth and player development.’

Detractor view: ‘I wish we didn’t have the link with Jorge Mendes [Fosun own part of Mendes’ football agency]; there are some doubts creeping in over a number of lacklustre transfer windows in a row.’

Detractor view: ‘Most realise we haven’t obeyed FFP, that’s why everyone hates us. Like to have done it without breaking the rules. But trophies!’

Manchester City’s Sheik Mansour is bad for football health, according to the fans who voted

Detractor view: ‘Lack of owner communication. Not enough investment in the squad. Attempts to hike ticket prices and furlough staff not cool.

Consensus fan view: ‘Delia is not an oligarch or a nation state with a dubious human rights record, for starters. Has undoubted passion for the club, has put plenty of her own money in, but not gambled the future of the club; we have financial sustainability, competitiveness for our budget; we have no external debt, an excellent culture, and good academy investment … and good pies.’

Detractor view: ‘We’re a yo-yo club. Too good for the Championship, dreadful in Premier League.’

Consensus fan view: ‘Improvement in the infrastructure and not using helicopter money to do so. Upgrading the stadium and training ground without sacrificing what the club is; ENIC have taken us from outside the elite to in it.’

Detractor view: ‘Too much emphasis on business growth rather than winning trophies. Sacking a manager before a final for example; neglect of the footballing and scouting parts of the club.’

None Achievements: Promoted to the PL four times

Consensus fan view: ‘He’s taken us from struggling in the Championship, with an occasional promotion, to Premier League regulars; aside from the Graham Taylor and Elton glory years, this is the most successful era we’ve had. Success had been redefined.’

Detractor view: ‘The constant manager merry-go-round needs to stop. The short-termism no longer has any effect on the players, it is expected. Need a new way of thinking and plan longer term; he sacks too many managers.’

Detractor view: ‘If they had insufficient money, and thus needed to leverage us to take us over, they shouldn’t have bought the club. They talk a good game but deliver nothing and put us in millions of debt.’

Controversies: Cancelled shirt deal after shirts were on sale

Consensus fan view: ‘No investment and never spoke to the fans bar via one interview with the FT. Allowed things to stagnate. We would have gone down had we not had a good manager and club staff.’

Detractor view: ‘Didn’t take money out of the club and/or overly disrupt the management team he had in place. Things could have been a lot worse given his situation in the end.’

Consensus fan view: ‘The club’s status has steadily declined with the Kroenkes. From title contenders to Champions League regulars to Europa League team; he sees the club as a business commodity; lack of culture, lack of passion and personal interest. Also lack of investment.’

Detractor view: ‘Doesn’t interfere. He lets the people he employs get on with their jobs and they rise and fall on their own decisions.’

Consensus fan view: ‘Unpopular stadium move. The way they act in the press and publicly, paying themselves interest on loans (and declaring they had to when it was proven they didn’t). The awful stadium itself and the experience, poor investment.’

Detractor view: ‘I’m not 100% on this, but to compete it was correct to move stadium. I have a problem with use of agents and don’t trust the financial plan.’

Farhad Moshiri is knowing for hiring and firing, with Everton having six managers in six years

Controversies: The opaque relationship between Moshiri and his associate Alisher Usmanov; Usmanov’s sanctioning for links to the Kremlin and subsequent loss of sponsorship

Consensus fan view: ‘Six managers in six years highlights the lack of a long-term plan, leading to attempted quick fixes, then failure, repeatedly; he shows a lack of football knowledge, and his lack of leadership has led to wasteful spending.’ Detractor view: ‘He’s given us financial backing, and is funding our new stadium, which is hugely important.’

Consensus fan view of previous owner Mike Ashley: ‘Lack of investment in the infrastructure of the club, leading to widespread perception that staying in the Premier League with minimum expenditure was his sole goal; the infrastructure was left to rot, from the stadium to the training ground; lack of communication … he appeared to dislike the fans and an had an antagonistic approach towards them, including renaming the stadium.’

Detractor view: ‘Spent money. Leeches, but not stingy like Arsenal and Spurs.’