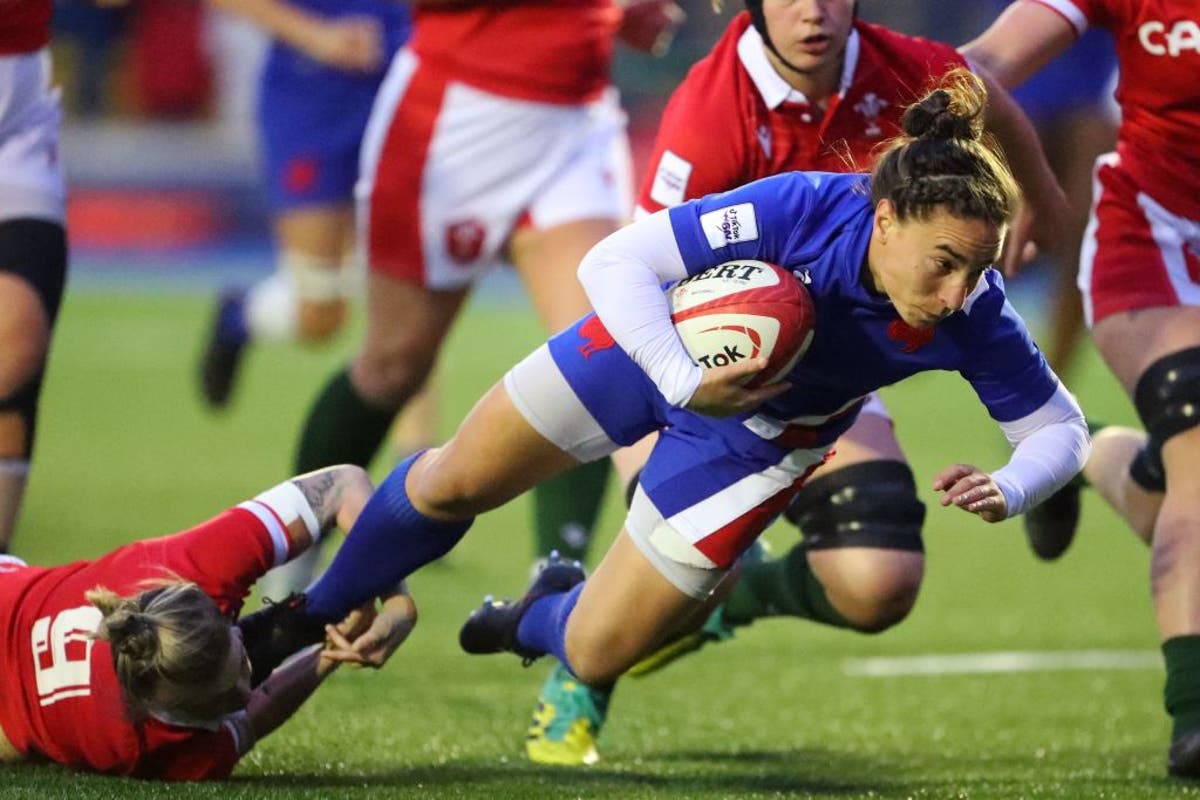 Follow live updates as Wales look to pull off a huge upset as they host undefeated France in the Women’s Six Nations. The visitors are aiming to continue their Grand Slam bid and victory at Cardiff Arms Park would go halfway to setting up a potential title decider against England Women’s Rugby next weekend.

Wales coach Ioan Cunningham will be expecting a response after his side suffered a heavy defeat to England last time out. Wales came into the match on the back of consecutive wins to open their campaign but despite a resilient effort, a 58-5 defeat at Kingsholm was a crushing blow.

France come into the match with an impressive recent record against the Welsh and have won their past five Six Nations meetings. Les Bleues have beaten Italy, Ireland and Scotland so far to keep their Grand Slam hopes on track, and Wales would be doing England a significant favour if they can spring an upset under the floodlights.

England face Ireland on Sunday and if the two unbeaten sides come through this weekend unscathed, it would set up a Women’s Six Nations grand slam decider in Bayonne on the final weekend of the campaign. Follow live updates from Wales vs France in the Women’s Six Nations, below:

Oh my France these passes are slick. Wales are doing everything they can to disrupt the visitors but France somehow hold onto it.

But then Wales get it back. However, there’s another scuffle with Lillicrap sizing up her France opposition. Will there be a card after the earlier warning? I don’t think so, those players are lucky.

Wales come out on top at the scrum and the hosts look to launch their first threatening attack. Jones is thumped but Wales get a penalty advantage and we come back for it. They kick to the corner but the line-out isn’t straight! Yep, another scrum.

How did that happen? Honestly I’m dumbfounded.

Wales have a scrum but Lillicrap loses control and Sansus pounces on the loose ball.

France have their bonus point before half-time.

Tremouliere gets her kick, this French team are firing and hungry for tries.

So just one more try needed for France to get that bonus point and we aren’t even 30 minutes in.

As I say, I apologise for my timings being a bit all over the place just now. The BBC clock didn’t stop for a stoppage and now has rolled it back.

France almost have their try as Filopon slices through Wales like butter and she gets the pass away. The ball goes through the hands but Jacquet’s pass to Boujard doesn’t go to hand. Breathless!

Wales do well to get a penalty which Snowsill takes quickly but it’s an error!

Jacquet catches the ball and just runs, runs and keeps running! She offloads to Sansus and the scrum-half passes back to dot down.

Tremouliere misses her first kick of the tournament.

The clock has changed on the BBC feed so I apologise if my timings are off.

There’s a scuffle on the field with Harries and M Menager having a disagreement but Fall separates the players.

The referee has a word with both teams to warn each them, if there’s any more of it they will be dealing out cards.

Wales have not been in France’s half so far but they are trying to launch something here from their own half.

The passes are going to hand but they are yet to crack into the French half. The visitors attack is ruthless and at the moment they are pushing them backwards.

And there’s the error, a knock-on gifts France the scrum.

Despite the scoreline being kinder Wales don’t look as slick or stoic as they were against England two weeks ago.

They check to see if Boujard was onside and then if she grounded the ball. The referee’s on pitch decision was try.

Joyce gets her hand to it but she gets it back to ground! Wow, we knew she was a threat but that is beautiful.

Tremouliere gets the conversion with a stunning kick!

Boujard chases after Tremouliere’s cross field kick but it looks as though she is taken out in the air. She looks in pain as she lands awkwardly.

There is a TMO check to see if she has grounded that, is this a try?

And again possession is gifted to France with another penalty and it’s Hale who is the culprit.

Lillicrap is receiving medical attention, let’s hope she is going to be okay! She looked slightly dazed and she is going off – unsure if this is an injury or a HIA. I think it’s a HIA and Harries is on in her place.

There’s another France line-out and Boujard is carving up the Wales defence. Can they get their second score here?

It was a Wales scrum but Hale is penalised at the set-piece again which has given France a great attacking opportunity.

France set-up a driving maul, which has been deadly for the visitors, and they bag a penalty advantage. They see an opportunity with the advantage in their pocket kick across field but it rolls into touch.

Tremouliere kicks to the corner and the driving maul is sure to be triggered once again. This time Wales have done really well to halt it. Initally the ref call a penalty for Wales but then she changes her mind! So another line-out to come from France.

But wow, France have been penalised for obstruction! This is so fractured at the moment with both teams being pinged.