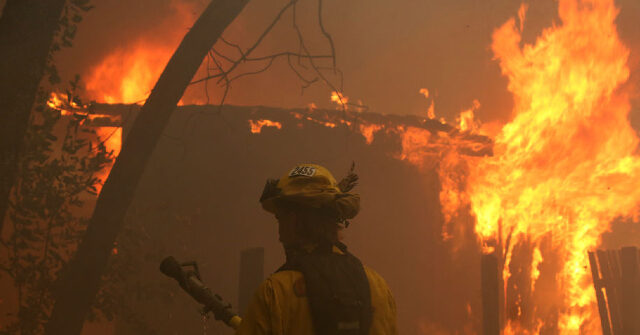 Authorities in Lafayette, Indiana, are praising a man who put himself in extreme danger to save others on Monday.

At the time of the incident, police and fire officials were notified of a house fire in the 2200 block of Union Street, WTHR reported Thursday.

The home was engulfed, keeping first responders from entering the structure once they learned a 6-year-old might still be inside.

However, a man who had entered the home before firefighters arrived leapt out a second story window while holding the child. He was later identified as 25-year-old Nicholas Bostic.

Video footage shows Bostic running up to first responders with the child in his arms, then collapsing onto the sidewalk as the fire rages in the background:

Bostic suffered smoke inhalation and a cut to his arm, but law enforcement noted the child was “miraculously mostly uninjured.”

The man said he was driving by when he noticed the fire, then stopped his car. He ran to the rear of the house and stepped inside, calling out for anyone who might be there.

He then went upstairs and discovered four children, whose ages ranged from one to 18. He helped them escape, but when they made it to safety, the man realized a fifth child, a six-year-old, could still be trapped.

He rushed back into the building but could not see anything due to the smoke. By crawling on the ground he was finally able to locate the child, take her upstairs, and jump out the window.

In a social media post on Thursday, law enforcement praised the man for his bravery.

“The Lafayette Police Department, the Lafayette Fire Department, and the Honorable Mayor Tony Roswarski are eternally grateful for Nicholas’ intervention and would like to publicly recognize him for his actions,” the police department said.

“On August 2nd, during National Night Out at the Aviators game, Nicholas will be honored, and we invite you all to attend,” it continued.