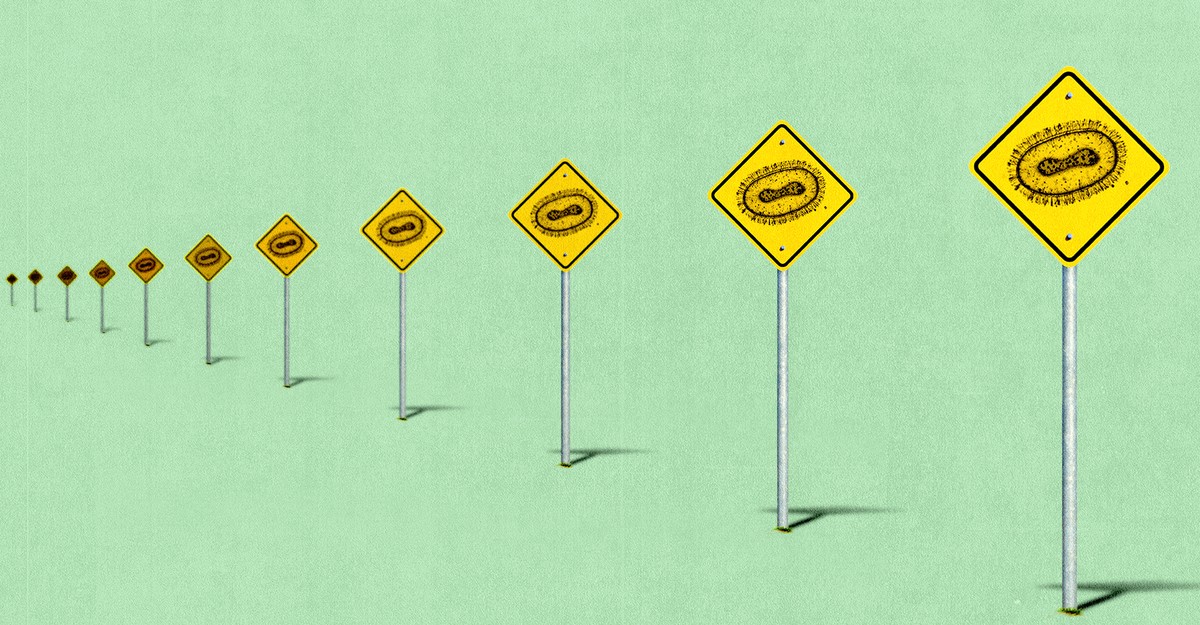 Nearly five years before an unusual cluster of monkeypox cases in the U.K. alarmed the world, doctors were dealing with an unusual cluster of monkeypox in another unexpected country: Nigeria. The virus is endemic to Central Africa, but Nigeria, far to the west, had not recorded a case of monkeypox since 1978. When an 11-year-old boy showed up with skin lesions in September 2017, doctors first suspected chickenpox. But no, tests pointed to the much more unusual monkeypox. From 2017 to 2022, Nigeria then found more than 500 confirmed monkeypox cases. Quite suddenly, it seemed, the virus had begun spreading somewhere new.

In Nigeria, too, doctors first picked up hints of a new pattern that would be repeated around the world. Many of the patients were men, and many had genital lesions, suggesting transmission via sexual contact. Four years later, many of the cases in Europe and the Americas are also in men and also characterized by genital lesions. “It looks like déjà vu to me,” says Dimie Ogoina, a doctor at Niger Delta University Teaching Hospital, which treated the first and many subsequent cases of monkeypox in Nigeria in 2017. The virus was known to spread through droplets and any kind of physical contact with infectious sores and scabs—but sex, specifically, had never been high on the list of transmission risks. (Past cases were usually linked to contact with wild animals or household contact.) The unusual pattern and unusual size of the Nigeria outbreak should have been a signal that something had changed for monkeypox. But the world ignored it until too late, and a global outbreak is now well under way.

“What happened in 2017 in Nigeria was absolutely a warning sign,” says Anne Rimoin, an epidemiologist at UCLA who has studied the virus. But as long as monkeypox stayed in Africa, the disease got little attention. The U.K., Singapore, and Israel did pick up the occasional case linked to travel to Nigeria in 2018 and 2019. “It’s possible there were many importations that were missed,” Rimoin says, which seeded local transmission that’s finally being detected now. The exact path the virus took around the world is unknown, but the genomes of viruses sequenced so far from Europe and the U.S. are most closely related to those linked to the Nigeria outbreak.

In fact, a preliminary genetic analysis from University of Edinburgh scientists suggests that the evolution of this monkeypox lineage suddenly accelerated sometime between 2017 and 2022. Poxviruses tend to accumulate mutations at a fairly slow rate of one or two a year, but the genomes from 2022 have a whopping 47 mutations. Intriguingly, almost all of the changes to the genetic code are TC to TT or GA to AA. This is unlikely to have happened through random copying error; instead it resembles the signature of an immune-system mechanism—found in both humans and animals—that introduces mutations in an attempt to disable the virus. This signature is seen in many common viruses, including SARS-CoV-2, notes Nicolas Gillet, a biologist at the University of Namur who has studied this defense mechanism. You can think of most of the mutations as “scars” from battling with the host immune system, says Richard Neher, a biologist at the University of Basel, though it’s impossible to say whether any could also be adaptive. In any case, monkeypox seems to have found a new host since 2017: either humans directly or another animal that then spread the virus to humans.

Read: So, have you heard about monkeypox?

The lack of attention to monkeypox means basic questions—such as which animal or animals in fact spread the virus—remain unanswered. Despite the name, monkeypox is more commonly found in rodents, though it can infect a wide range of species, including primates and rabbits. When it comes to the virus’s natural animal reservoir, “we don’t know,” says Boghuma Titanji, an infectious-disease doctor at Emory. In addition to the Nigeria outbreak that began in 2017, a separate outbreak of a more severe form of monkeypox has been intensifying around the Democratic Republic of Congo, where the virus has long circulated. The Congo has seen 1,200 cases and 58 deaths this year alone.

Only now, with a few hundred cases outside Africa, particularly in rich countries, do we “see a shift in attention,” Titanji says. Earlier investments in research might have identified strategies to prevent spillovers from a reservoir before they happened. And now, scientists around the world are scrambling to understand the full range of monkeypox’s transmission and symptoms in the middle of a global outbreak. “We could have been doing this much sooner and more preemptively,” she says.

“Most of our information on the epidemiology and the clinical presentation [comes from] the early ’80s,” Rimoin says. Monkeypox was of particular interest then because doctors worried that it might sweep in following the eradication of its more severe relative, smallpox. Since then, however, monkeypox has been “neglected lamentably,” says David Heymann, an epidemiologist at the London School of Hygiene and Tropical Medicine who has studied the virus in the Congo. He ticked off a list of basic questions he would like to see answered: “What does this virus do in immunocompromised people? Is there an asymptomatic form of infection? Does that asymptomatic form transmit to others? Is it transmitted by fomites when you sneeze or cough? Things like that are not known.”

In particular, Heymann notes that the milder West Africa clade of the virus in Nigeria and now around the world may behave differently than the more severe and slightly better characterized one found in the Congo. Its relative mildness may have helped it spread, because people who are very sick are less likely to travel. Not everyone infected with the West Africa clade seems to get a generalized rash that is normally associated with the virus, Heymann adds. And the possibility of sexual transmission is not fully understood. Monkeypox sores can occur on many parts of the body, so their appearance in the genital area may have begun as a random event that then allowed it to spread through physical contact during sex. Whether the virus also spreads through semen or vaginal fluids, however, is unknown. Such studies hadn’t been done, even though the 2017 Nigeria outbreak already hinted at the role of transmission during sex.

As monkeypox has gone global, patients in Europe and North America are getting antiviral drugs. Health-care workers and close contacts of patients are being offered vaccines. But at his hospital in Nigeria, Ogoina says, doctors never had any of the antiviral drugs or vaccines. All they had for monkeypox patients was supportive care. Furthermore, case numbers are likely being underestimated right now. “We need to step up surveillance,” he says, pointing to the need for more labs that can diagnose the virus, antibody surveys to study its prevalence, and monitoring of potential animal carriers.

Countries in Europe and North Americas may be able to tame their monkeypox outbreaks. But “an infection anywhere is potentially an infection everywhere,” Rimoin says. As long as monkeypox circulates in Africa, it will keep seeding cases elsewhere. And it will keep sickening and killing people in Africa. The early warning signs for monkeypox were there all along, and they should be by now unignorable.