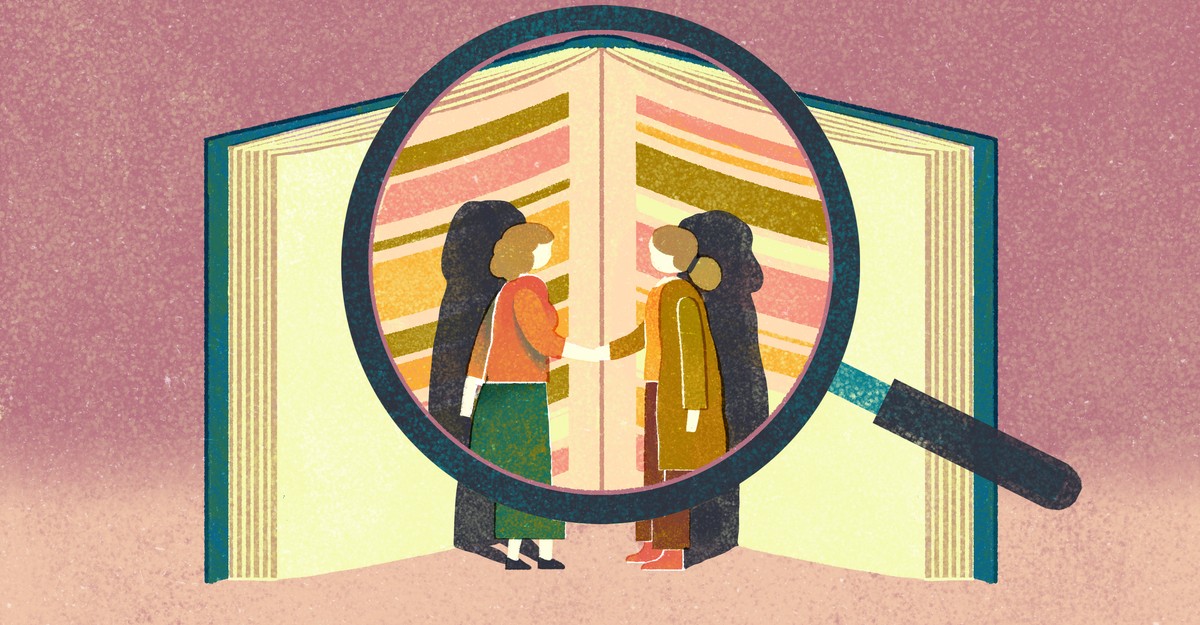 Each installment of “The Friendship Files” features a conversation between The Atlantic’s Julie Beck and two or more friends, exploring the history and significance of their relationship.

This week she talks with two friends who also happen to study friendship. They met at a conference back when very few relationship scholars were focusing on the topic, and became both friends and professional collaborators. They talk about what they’ve learned from their research and how they’ve applied those lessons in their own friendship.

This interview has been edited for length and clarity.

Julie Beck: How did you get into researching friendship, and what have you studied?

Rebecca Adams: While I was in graduate school, my grandparents were living far away from most of my family. I lived closest to them, and I noticed that they were relying on their friends to take care of them. At the same time, I was beginning to take classes in aging. So I started to think about friendship and aging, and ended up proposing a dissertation on the topic.

I’ve focused on other things since, including music fans as a community, but I’ve published on friendship and aging throughout my career.

Read: How friendships change in adulthood

Rosemary Blieszner: I thought about how much I valued my friends and how I wanted to know more about how friendship changes or stays the same in old age. I was also working on a research project about old people’s cognitive functioning—so that was a serendipitous opportunity to investigate older-adult relationships.

Beck: How did the two of you meet and become friends?

Rosemary: We met at a conference. I was working with a faculty member who was involved in developing a new discipline focused on interpersonal relationships. Scholars doing that kind of work came together and held a conference. At that conference, a person came up to me and said, “There’s this other scholar here presenting on older-adult friendship.” And he said the same thing to Rebecca. So we met and started talking.

We realized we had come to very similar conclusions about the gaps in the research. Although Rebecca was writing from the perspective of sociology and I was writing from the perspective of psychology, we were both noticing that very little research at that time had been done specifically on friendship. People were talking about primary relationships—meaning family, marital partners, and parent-child relationships—and lumping friends with everybody else, like co-workers and neighbors and people you know at church.

Rebecca: We began working on something together as soon as we met. I was interested in having a conference and bringing together all the friendship researchers, because we were from different fields and there weren’t that many of us. We ended up doing that, combining it with a book on older-adult friendship, our first publication together. Everyone wrote chapters before the conference, and we used it as a workshop to develop the edited book.

Rosemary: The book’s purpose was to jumpstart the field.

Rebecca: All sorts of things grew out of those people meeting each other.

Beck: You’ve collaborated on a lot of things together. Are there particularly memorable projects that stand out to you?

Rosemary: We created a questionnaire related to the networks that people form, the interaction processes that build and sustain friendships, and what might lead to the fading away or the demise of friendships. That study was very important to our career development and to the field, because I don’t know that anyone else took such a thorough interdisciplinary approach.

Rebecca: Everything generated from that model. I couldn’t resist—I made this cheat sheet about our friendship for this interview and divided it into process and structure, which is how our model is developed. I have on here things about the process in our friendship, but also why, structurally, we saw each other and had enough time to develop a friendship.

Rosemary: That really made me laugh, Rebecca, that you used our model in this cheat sheet.

Beck: Tell me about the process and the structure!

Rebecca: I’ll say the structure thing first—we had very synchronously evolving careers. We were going in lockstep through the same things. It wasn’t just promotions; we were also very service-oriented, and we both started administrative careers at about the same time. And we were both journal editors. We just kept having these same experiences.

Rosemary: We were both presidents of professional societies.

Rebecca: So we could help each other, simply because of the way our lives were structured. Our model has a part called “behavioral motif,” which is the idea that everybody’s life has a rhythm that takes them certain places. Friendship starts with unplanned repeated interactions.

Rosemary, why don’t you talk about process?

Rosemary: It was an interaction of structure and process because we both had a lot of the same work habits and values. So we made opportunities to be together. We took beach trips together. We brought our children with us. They played with each other while we worked, and then we would swim or drink wine on the deck in the evening. We were intersecting our personal lives with our work lives.

Rebecca branched into research on the Grateful Dead, and I went to Grateful Dead shows with her, kind of as her research assistant, helping her to make observations. It was connected to research, but it was also social.

Because we were always together and our names started with R, people mixed us up all the time. In our writing, it got to the point where we could no longer remember who wrote which sentences, or who came up with this or that idea.

Rebecca: We were so playful together. One time we went to this conference in Virginia and there was a reception in a museum with a band playing downstairs. Rosemary and I went into one of the art galleries so we’d have more room to dance. Like our writing, you couldn’t tell who was leading. We got kicked out of the exhibit by a guard.

Beck: Does your research ever affect the way you approach your friendships?

Rebecca: One of the things that’s clear is that friendships need to be maintained. That was part of our model too. Rosemary’s very good at things like sending birthday cards and thank-you notes. And I’m not quite as good at that. But we recognized that we couldn’t be casual about this, that we had to stop relying on encountering each other in our everyday lives.

For example, when I was president of the Southern Sociological Society, Rosemary introduced me for my presidential address, even though she’s not a sociologist. And she had a competing event—you were getting some award.

Rosemary: I was getting an award at my university, and I didn’t attend because it was the same day as Rebecca’s presidency. That had to take priority. It was her big day.

To maintain close relationships, you do need to be intentional and plan time together. We aren’t working on friendship research as intensively right now, but when we see each other, we always pick up wherever we left off. There’s no need to reestablish our bond. It’s just a matter of catching up. That contradicts the notion that you need to spend a lot of time together. But once you have a solid bond, if there’s nothing serious to disrupt it, it can be enduring.

Rebecca: We could very easily drift apart—that was another finding. Most people don’t end friendships. They just gradually stop seeing each other. We’ll have to be very conscientious about not letting that happen as we get older and have less reason to come together professionally.

The Friendship Files: When the dream of growing old with your friends comes true

Beck: It seems like you’re saying you need to make sure you carve out time for each other, and if you do, then when there are periods where you don’t get together as much, you have a foundation and can pick up where you left off?

Rebecca: In my dissertation, I found that people’s closest friends were their oldest friends, even if they didn’t live near them. And Rosemary was definitely one of the very first people I developed a professional friendship with.

It also helped that when we did have problems, we addressed them instead of letting them fester. So they didn’t threaten our friendship; we didn’t lose each other. I think our knowledge of the literature might have motivated that too.

Beck: Are there particular issues you remember that you’re comfortable sharing?

Rebecca: There were two times—one was about order of authorship, and one was how to cope with the fact that we had developed some of our work separately.

Rosemary: Rebecca proposed that we would publish in alphabetical order. And I said, “Okay, sometimes.” We were new assistant professors, and your publication record—particularly what you have taken the lead on—is really important in moving toward tenure. It wasn’t about our egos; it was very pragmatic. I probably wouldn’t even think about it now.

Rosemary: There’s a lot of concern these days about loneliness, in particular the loneliness of older adults. If you are lonely for some reason and you just stay in your home all the time and don’t go out and do anything, then you’re not going to solve the problem. That comes from the literature: You have to put effort in. You can’t be successful in cultivating and sustaining friendships if you’re passive about it.

Rebecca: That is perfect, because Rosemary gave a process answer and I’m going to give a structure answer.

Most relationships develop because of unplanned interactions with someone. And they usually develop through focus on some activity. Activities self-select people who are somewhat similar to begin with, maybe coming from similar social positions and backgrounds. So if you’re lonely and you want to make new friends, find an activity that you’re interested in that would attract other people whom you might have something in common with.

If you or someone you know should be featured on “The Friendship Files,” get in touch at friendshipfiles@theatlantic.com and tell us a bit about what makes the friendship unique