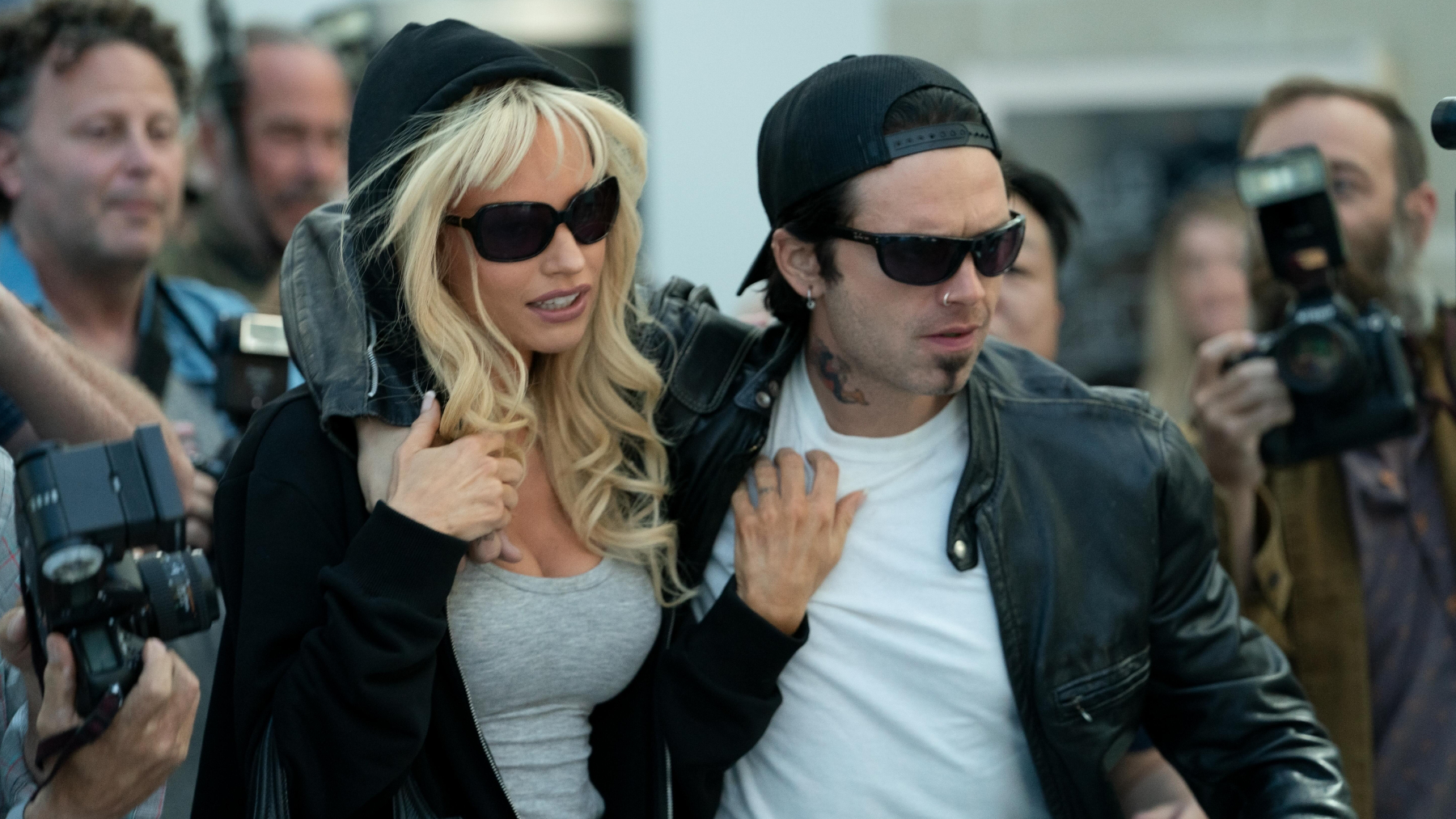 If you purchase an independently reviewed product or service through a link on our website, Rolling Stone may receive an affiliate commission.

February is the shortest month of the year but that doesn’t mean it has to be any less filled with enticing film and TV options than any other month. That’s certainly true of this February, which begins and ends with a pair of ripped-from-the-headlines miniseries, beginning with the inside story of an infamous sex tape and ending with a boardroom drama from the ride share world. In between you’ll find everything from killer robots to an in-depth look at one of the 21st century’s most important, and mercurial, musicians.

In 1995, Motley Crüe drummer Tommy Lee and Baywatch star Pamela Anderson videotaped themselves enjoying some intimate moments together on their honeymoon. That might have been the end of it had a disgruntled electrician not stolen the tape, a theft that led to it being released to the world after winding its way through some shady L.A. characters. Lily James and and Sebastian Stan play the central couple in this Craig Gillespie-directed miniseries recounting the strange saga. Seth Rogen and Nick Offerman co-star as two of the shady characters. Watch with a free trial to Hulu here.

Each episode of this new Netflix series (adapted from BBC3’s Murder in Successville) charges Det. Terry Seattle (Will Arnett) with solving a murder with some help from a special guest star. The catch: the guest stars have not been given scripts and have to improvise their way through the mystery. With guests that include Conan O’Brien, Annie Murphy, and Ken Jeong, this looks like a promising bit of chaos. Watch on Netflix here.

For a while it looked like 2010’s Jackass 3D would be the end of Johnny Knoxville and crew’s big-screen antics. Ensemble member Ryan Dunn died in 2011 and, apart from Jackass Presents: Bad Grandpa, the movie series seemed like it had wound down. Which just made sense. Everyone was getting older. How much more could they take? More, it turns out. Apparently everyone was up for at least one more movie. Released after a pandemic-necessitated delay, this new film reunites the team for another go-around.

Independence Day and 2012 director Roland Emmerich finds a new way to destroy the world, or at least threaten its destruction, with this thriller in which the moon starts to hurtle to Earth. Or does it? And, can a team that includes Halle Berry, Patrick Wilson, and Michael Peña head off doomsday no matter what’s going on? Either way, it looks like summer has come early for blockbuster fans who dig Emmerich’s distinctive brand of globally scaled disaster movie.

The Worst Person in the World (Theaters, February 4)

In what ought to be a breakout performance, Renate Reinsve stars as Julie, a twentysomething Norwegian who can’t make up her mind about what she wants to do with her life — professionally, personally, and otherwise — and finds the world doesn’t offer much in the way of guidance. The latest from Joachim Trier (Thelma; Oslo, August 31st) considers the new possibilities and new woes of the 21st from the perspective of someone trying to fumble through it one misstep and fresh passion at a time.

Previously adapted into a pair of movies starring Tom Cruise, Lee Child’s “Jack Reacher” books come to television in an eight-part first season adapting “Killing Floor,” the first entry in the popular series. Alan Ritchson (Titans) takes over for Cruise in a story that finds Reacher caught up in a tale that finds him tangled up in the seedy underworld of a small southern town. Watch with a 30-day free trial to Amazon Prime here.

The Eighties were a boom time for stand-up comedy but the boom didn’t benefit everyone equally. In the Nineties, comedian Guy Torry sought to change that with “Phat Tuesdays,” a night dedicated to spotlighting Black talent at Los Angeles’ Comedy Store. This new docu-series looks back on the night and its legacy, one that extends beyond helping launch high-profile names like Chris Tucker and Nick Cannon. Watch with a 30-day free trial to Amazon Prime here.

The Girl Before (HBO Max, February 10)

Based on a best-selling novel, this four-part miniseries stars Jessica Plummeer, Ben Hardy, and Gugu Mbatha-Raw as assorted tenants of a high-tech dream house who agree to the many restrictive (and weird) rules laid out by its architect (David Oyelowo). (No pets but also no books or rugs.) Trouble, inevitably, ensues. Watch on HBO Max here.

Following 2020’s Let Them All Talk and last year’s No Sudden Move, Steven Soderbergh continues to explore the possibilities of making films for HBO Max with this new thriller starring Zoë Kravitz as an agoraphobic Seattle resident forced to go outside in the midst of a pandemic in an attempt to expose a crime. David Koepp (Panic Room) provides the screenplay. Watch on HBO Max here.

Death on the Nile (Theaters, February 11)

In a new romantic comedy arriving just in time for Valentine’s Day, Charlie Day and Jenny Slate star as strangers united by heartbreak and a desire to get back at the exes that dumped them (Gina Rodriguez and Scott Eastwood). Directed by Jason Orley, the film’s promising cast also includes Manny Jacinto (The Good Place) and Clark Backo (Letterkenny). Watch with a 30-day free trial to Amazon Prime here.

Marry Me (Theaters and Peacock, February 11)

Speaking of rom-coms, they’ve had a tough time in theaters in recent years, but if anyone can bring them back it’s Jennifer Lopez. Here Lopez stars as “Kat” Valdez, a pop star who ends her high-profile romance with her musical partner and decides to marry Charlie (Owen Wilson), an ordinary guy who happens to be holding a sign reading “Marry Me” at one of her concerts. Could she have accidentally found her true love? Watch with a free trial to Peacock here.

Robots: can they ever be trusted? They certainly can’t in this new film from Jean-Pierre Jeunet which takes place in a near future suburb where household robots have locked up their owners for their own protection. (To be fair, there’s a violent robot uprising taking place outside.) Jeunet’s had something of a lower profile in the U.S. for the past decade or so, but this odd-looking film appears to be a return to his eccentric, visually kinetic early work.

From his early days in Ego Trip magazine, Sacha Jenkins has offered challenges to the traditional conversation about race. Billed as the “history of race in America from the perspective of people of color,” this three-part docuseries looks likely to continue that pattern. The interview subjects range from Jemele Hill to Margaret Cho and episodes touch on everything from the treatment of indigenous peoples to the long-lasting effects of government policies. Watch with a free trial to Showtime here.

Based on Jessica Pressler’s article “How Anna Delvey Tricked New York’s Party People,” this nine-episode miniseries recounts the story of Anna Sorokin (Julia Garner), who tricked her way through through New York’s elitist circles by claiming to be a German heiress name Anna Delvey. She didn’t get away with it forever but her charm and largesse allowed her to fool others for years. Shonda Rhimes serves as executive producer. After Bridgerton, it’s the second product of her blockbuster Netflix deal. Watch on Netflix here.

In one of the unlikeliest TV origin stories in recent years, this reimagining of the beloved, Will Smith-starring sitcom The Fresh Prince of Bel-Air began as a fan film. Directed Morgan Cooper, it recast the story of a Philly teen struggling to adjust to life in plush California as a contemporary drama. Among its fans: Will Smith, who worked with Cooper to develop it into a new series starring Jabari Banks and featuring a lot of new faces playing familiar characters. Watch with a free trial to Peacock here.

It makes sense that the story of Kanye West could never be contained within a single documentary. Directed by the team of Coodie & Chike, who’ve known West since the early days, covers his life and career from his rise in Chicago through recent years. The first part, which culminates with his long-in-the-making signing to Roc-A-Fella Records, debuted to a warm reception at Sundance this year (though its premiere did coincide with West “kindly” asking for a final edit before release). Watch on Netflix here.

Since its first entry debuted in 2007, the “Uncharted” series seemed like a natural game to receive a big-screen adaptation thanks to its globe-trotting, Indiana Jones-inspired adventures that combine archeology and gunplay (and a lot of climbing and jumping from one perilous locale to the next). After over a decade of false starts, Uncharted is finally making it to theaters starring Tom Holland as young future hunter Nathan Drake and Mark Wahlberg as his mentor, Sully. (As an example of how long this movie has been in the works, Wahlberg was at one point set to play Drake.)

Trying to strike a work/life balance is always challenging but what if there was a method to make it easier? This new Ben Stiller-product, Dan Erickson-created series imagines a world in which that’s possible thanks to a process called “severance” that divorces an employees’ work memories from their life away from work. What sounds like an elegant solution holds dark possibilities, however. Adam Scott leads a cast that includes Patricia Arquette, John Turturro, and Christopher Walken. Watch on Apple TV here.

The venerable story of a poetic soul who pines for a woman he feels to be unattainable because of his appearance gets a musical treatment with a script by Eric Schmidt and songs by members of The National. It also gets a bit of a reconceptualization. Instead of being filled with doubt because of his large nose, this Cyrano (Peter Dinklage) is held back by insecurities tied to his short stature. Haley Bennett, who played the same role opposite Dinklage in an earlier stage version, co-stars as Roxanne.

In 1997 Foo Fighters made a hauntingly creepy, uncomfortably funny video for the song “Everlong,” a Michel Gondry-directed clip that played like a cross between “Un Chien Andalou” and Evil Dead. With the made-in-secret Studio 666 the band returns to the horror movie realm with a feature-length film. The band plays themselves as they attempt to record their 10th album in a house that may not want them to leave.

You might have heard of this one: Francis Ford Coppola’s landmark mob saga returns to theaters to mark its 50th anniversary. If you’ve never seen it, it’s as good as you’ve heard. If you have, it’s never a bad time to watch it again.

The tumultuous tenure of Uber co-founder and CEO Travis Kalanick gets the miniseries treatment of Mike Isaac 2019 book about the company’s behind-the-scenes struggles. Written and produced by Brian Koppelman, David Levien, and Beth Schacter — collaborators on Billions — the series stars Joseph Gordon-Levitt (as Kalanick), Kyle Chandler, and Elisabeth Shue. It’s also the first installment in an anthology series. Future seasons will look elsewhere for tales of corporate struggle and excess. Watch with a free trial to Showtime here.