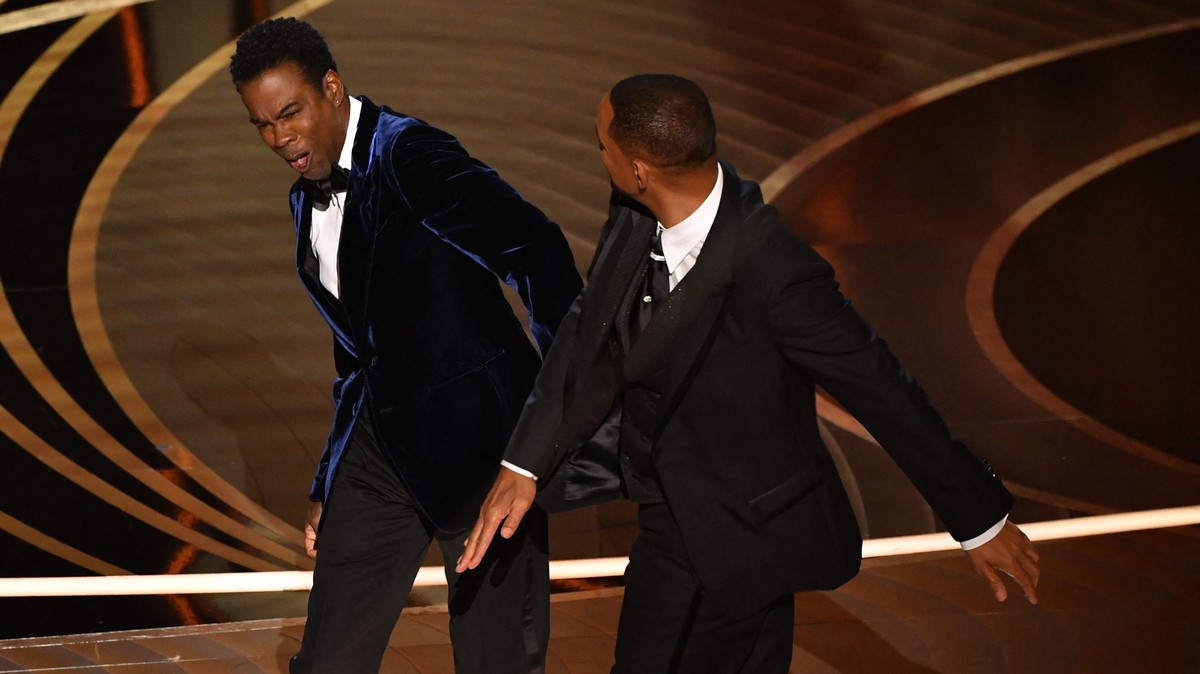 The U.S. broadcaster of the Oscars cut off the audio almost immediately after Will Smith struck Chris Rock. Photo: ROBYN BECK/AFP via Getty Images

American TV operators scrambled for the mute button after actor Will Smith hit comedian Chris Rock on the stage of the Oscars, but the slap echoed around the world loud and clear.

Smith smacked Rock, the host of the Academy Awards on Sunday, after the stand-up comic made a joke about the actor’s wife. As a shocked Rock searched for a response to the attack, the awards’ U.S. broadcaster ABC killed the audio, puzzling many viewers in the country.

“Wow. Wow. Will Smith just—” Rock was heard saying before the sound was cut off. He had joked that Smith’s wife, Jada Pinkett Smith, could be in the next G.I. Jane movie, an apparent reference to her short-cropped hair. Pinkett Smith, who is also an actor, has alopecia, an autoimmune condition that causes hair loss.

The U.S. telecast restored the audio only after some 20 seconds, but the complete verbal exchange between Smith and Rock was broadcast uncensored in countries including Japan, Australia, and Argentina.

“Will Smith just smacked the shit out of me,” Rock said.

Smith, who at this point had returned to his front-row seat, shouted: “Keep my wife’s name out of your fucking mouth.”

The stunning attack has become the most talked-about moment of the 2022 Oscars, overshadowing Smith’s first-ever Oscar win and prompting an outpouring of comments across the globe on his behavior.

Many thanked social media users in Australia and Japan for posting uncensored versions of the exchange. A Japanese TV video of the altercation has been watched 37 million times on Twitter. One Australian version has garnered more than 27 million views and over 185,000 retweets.

On Japanese TV, an announcer translated Rock’s response as “Will Smith got me” and aired the actor’s expletives in full. The broadcaster went on to calmly translate Rock’s attempt to defuse the tension in the room. “Wow dude, it was a G.I. Jane joke,” he said.

On Japanese social media, where Smith’s actions were a trending Twitter topic all day, some praised the actor for defending his family.

In a post that garnered more than 43,000 likes, a user said, “When his wife was insulted, Smith didn’t hesitate to get on that stage and punch Rock in the face, even when countless cameras were rolling and broadcasting around the world… Will Smith is so cool.”

In China, the hashtag “Will Smith Hits Someone on Stage” has been viewed more than 170 million times on the Chinese social media site Weibo. The most popular comments appear to criticize the joke, not Smith’s outburst.

“It’s not funny making fun of sick people,” reads the top comment in response to a post about the attack by the movie account of the Chinese news portal Phoenix. Rock “deserved it,” other top comments say.

In India, some women have called out Smith for reacting violently to the situation and described it as a form of toxic masculinity, arguing that women didn’t need their husbands to protect them.

comedians sets a dangerous precedent. Though Indian comics freely make jokes at the expense of their wives, some have been jailed for making political jokes in recent years. Vipul Goyal, a well-known Indian comic, tweeted, “Comedians are in danger.”

The Los Angeles Police Department said it was aware of a slapping incident at the Oscars, but that the person involved “declined to file a police report.” The Oscars released a statement saying that it doesn’t condone violence of any form.

Smith won best actor for his appearance in King Richard, his first Academy Award. He was first nominated for an Oscar in 2002, for his portrayal of Muhammad Ali in Ali, and again in 2007 for his performance in The Pursuit of Happyness.

He returned to the stage to accept his award less than two hours after he hit Rock. In his acceptance speech, Smith tearfully apologized to the Academy and other nominees but didn’t address Rock.

He apparently referred to the altercation when he said, “Love will make you do crazy things.” He likened himself to Richard Williams, the titular character he plays in King Richard and father of tennis sisters Venus and Serena Williams.

“Art imitates life. I look like the crazy father, just like they said about Richard Williams. But love will make you do crazy things,” he said.