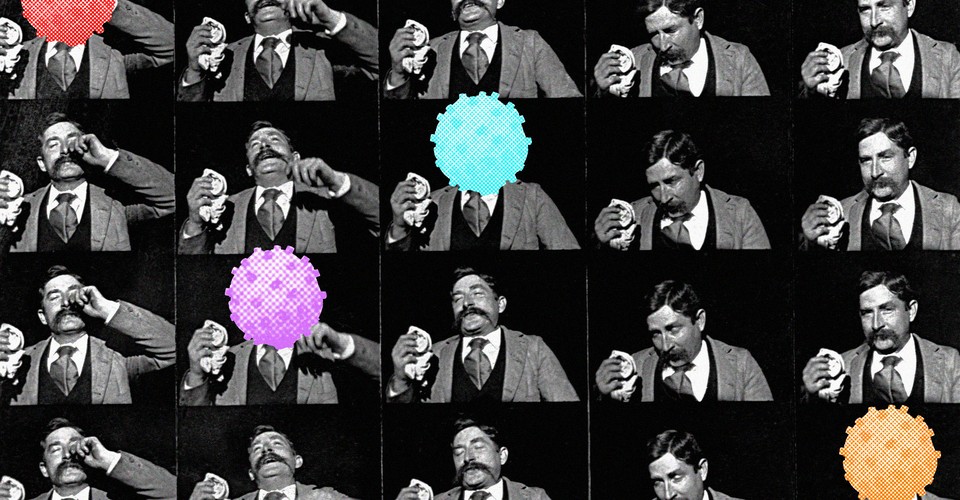 To understand how the coronavirus keeps evolving into surprising new variants with new mutations, it helps to have some context: The virus’s genome is 30,000 letters long, which means that the number of possible mutation combinations is mind-bogglingly huge. As Jesse Bloom, a virologist at the Fred Hutchinson Cancer Research Center, told me, that number far, far exceeds the number of atoms in the known universe.

Scientists try to conceptualize these possibilities in a “fitness landscape”—a hyper-dimensional space of peaks and valleys. The higher peaks the coronavirus discovers, the “fitter,” or better at infecting people, it becomes. The more the virus replicates, the more mutations it tries out, the more ground it explores, and the more peaks it may find. To predict what the coronavirus could do next, we would simply need to know the topography of the entire fitness landscape—which, maybe you’ve guessed, we do not. Not at all. Not even close. “We don’t actually know what peaks are out there. We didn’t know the Omicron peak was out there,” says Sarah Otto, an evolutionary biologist at the University of British Columbia. “We can’t really guess what more is possible.”

What we can say is that the overwhelming majority of mutations will make a virus less fit (valleys) or have no effect at all (ridges), but a very small proportion will be peaks. We don’t know how high those peaks are or exactly how frequently they appear. When Delta took over the world, it seemed like it would sweep all other lineages away. “I would have for sure thought the next variant was going to come from Delta,” says Katia Koelle, a biologist at Emory University. Then Omicron popped up on a distant peak, in a direction no one had thought to look.

The next variant may surprise us again. It could, by chance, become more virulent. It could become more transmissible. It will definitely alight upon new ways to escape the antibodies we’ve built up. The virus will keep finding those fitness peaks.

To make predictions about viral evolution even harder, the fitness landscape is continuously being remodeled as our mix of immunity shifts through vaccination and infection by new variants. This in effect changes what it means for the virus to be fit. Some mountains will sink; some hills will uplift. Still, the virus is extremely unlikely to mutate so much that our immunity against severe infection is reset to zero. As more and more of the world gains initial immunity from vaccines or infection, that will dampen the most severe outcomes. Whether future variants will still cause huge numbers of infections will depend on how quickly the virus can keep evolving and how well our immunity holds up after repeated exposures. Unlike other pathogens that have been criss-crossing the fitness landscape in humans for a very long time, the coronavirus has only just gotten started.

The coronavirus’s variants keep surprising us because its evolutionary leaps look like nothing else we’ve seen before. Omicron racked up more than 50 mutations, with more than 30 in its spike protein alone. Of the four seasonal coronaviruses that cause common colds, two accumulate only 0.3 or 0.5 adaptive mutations a year in their spike proteins. A third doesn’t seem to change much at all. The fourth is a mystery—we don’t have enough long-term data on it. Influenza is capable of big jumps through a process called reassortment, which can cause pandemics (as H1N1 did in 2009), but the seasonal flu averages just one or two changes a year in its key protein, Koelle told me.

There are three possible explanations for why the evolution of SARS-CoV-2 looks so different from that of other viruses, and they are not mutually exclusive. First of all, we really haven’t looked that hard at other respiratory viruses. More than 7.5 million genomes of SARS-CoV-2 have been sequenced; just a few hundred or a few dozen for each of the four seasonal coronaviruses have been. When scientists try to reconstruct the relationship among these sequenced viruses in evolutionary trees, “the trees are so sparse,” says Sarah Cobey, a biologist at the University of Chicago. A whole suite of other viruses also cause common colds: rhinoviruses, adenoviruses, parainfluenza, respiratory syncytial virus, metapneumovirus, and so on. These, too, are poorly sampled. More than 100 types of rhinoviruses alone infect humans, but we don’t have a great understanding of how that diversity came to be or evolved over time.

Second, the coronavirus could indeed be an outlier that is inherently better than other viruses at exploring its fitness landscape. “It helps to be an RNA virus”—which acquires mutations more quickly than a DNA virus—“and then it helps to be moving really fast,” Cobey told me. Measles takes, on average, 11 or 12 days between infecting one person and that person infecting another; the coronavirus takes only 1.5 to three. The more people it can infect, the more of the fitness landscape it can explore.

Third, the coronavirus was a novel pathogen. Whatever intrinsic transmissibility it may have had, it was also unimpeded by immunity when it first arrived in the human population. That means SARS-CoV-2 has been able to infect a simply staggering proportion of the world in two years—far more people than older viruses are typically capable of infecting. And each time it infects someone, it copies itself billions of times. Some copies created in every infection will harbor random mutations; some mutations will even be beneficial to the virus. But these mutations can have a hard time becoming dominant in the short course of a typical COVID-19 infection. “It takes a while typically for a mutation to go from zero to even 5 to 10 percent” of viruses in an infected person, says Adam Lauring, a virologist at the University of Michigan. That person then transmits only a tiny number of virus particles to the next person, so most of that diversity gets lost. Across millions of infections, some of those mutations are passed on, and they gradually accumulate into one viral lineage. Delta seems to have evolved this way. The coronavirus’s ubiquity could have also seeded an unusual number of chronic infections all at once, which experts think are another big driver of viral evolution. In a chronic infection, over weeks and months, those beneficial viral mutations have time to become dominant and then transmit. This may be how Alpha originated.

Omicron’s origins are still unknown. It may have evolved in a piecemeal fashion like Delta, but some experts think that its ancestors would have been found via sequencing if so. Two other possibilities exist: a chronic infection in someone immunocompromised or an animal reservoir that spilled back into humans. In both cases, the selection pressures within one  immunocompromised patient or in an animal population are slightly different from those on a virus that is transmitting between humans. That may be what allowed the virus to cross a fitness chasm and discover a new peak in Omicron. Understanding the evolutionary forces that created Omicron can help us understand the realm of what is possible—even if it can’t tell us exactly what the next variant will look like.

“With Omicron, I think we got lucky,” says Sergei Pond, an evolutionary biologist at Temple University. The set of mutations that makes the variant so good at infecting even vaccinated people just happens to also make it a little less inherently virulent. There’s no reason this will always be the case. The coronavirus’s virulence is a by-product of two other factors under more direct evolutionary pressure: how inherently transmissible it is and how good it is at evading previous immunity. How deadly it is doesn’t matter so much, because the coronavirus is usually transmitted early on in an infection, long before it ever kills its host.

Across the immense fitness landscape, the coronavirus has many, many different paths to higher inherent transmissibility or immune escape. Take the example of transmissibility, Otto says. A virus could replicate very, very fast, so that patients shed high levels of it. Delta seems to do this, and it was more virulent. Or the virus could switch to replicating mostly in the nose and throat, where it might be easier to transmit, rather than deep in the lungs. Omicron seems to do this, and it is less virulent. The next variant could go either way—or it might chart an entirely new course. A version of Omicron called BA.2 is now outcompeting the classic Omicron variant in the United Kingdom and Denmark, though it’s still unclear what advantage it might have.

Omicron doesn’t just have a lot of mutations; it has some really unusual ones. Thirteen of the mutations cluster in sites where scientists haven’t seen many changes before. That suggests mutations there normally make the virus less fit and get weeded out. But according to a preprint from Pond’s group, these 13 individually maladaptive changes might be adaptive when present all together. You can imagine, he told me, a virus under pressure to escape from existing antibodies. It acquires a series of mutations that make it less recognizable to antibodies but perhaps worse at entering cells. Under the slightly different selection environment inside an immunocompromised patient or an animal reservoir, the virus still might be able to linger—until it finds just the right combination of mutations to compensate for previous changes. In Omicron, this process remodeled key parts of the spike protein so that it both became less recognizable to existing antibodies and found a different strategy for entering cells. The coronavirus normally has two ways of infecting cells, either fusing directly with them or entering through a bubble. Omicron has become a specialist in the latter, which happens to work less well in lung cells than in nose and throat cells, and may explain the variant’s lower intrinsic severity. To get around the immune system, the virus ended up changing one of its most basic functions.

Do other sets of mutations interact in unknown ways to change key viral functions? Almost certainly. We just don’t know what they are yet. We’ll have to wait and watch SARS-CoV-2in the years and decades to come. “If you look at human influenza or seasonal coronaviruses, they’ve been evolving in humans for a long time and they haven’t stopped evolving,” Bloom, the virologist, said.

There are limits to how inherently transmissible the virus can get. Measles, the most transmissible known virus, has an R0 of 12 to 18, compared with Delta’s R0 of 5. Omicron’s R0 is still unclear, because a lot of its advantage over Delta seems to come from evading existing antibodies rather than inherent transmissibility. As the coronavirus has fewer and fewer nonimmune people to infect, though, immune evasion will become a more and more important constraint on its evolution. And here, the virus will never run out of new strategies, because what is optimal is always shifting. This Omicron wave, for example, is generating a lot of Omicron immunity as it moves through the population, which has in effect made Omicron less fit than when it emerged. “The next variant is more likely to be not Omicron, or something as antigenically distinct from Omicron as possible,” says Aris Katzourakis, a virologist at the University of Oxford. But exactly what that looks like? Perhaps we know enough now to know we shouldn’t try to predict that.