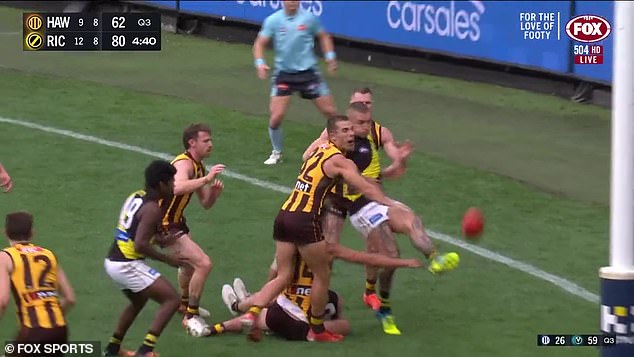 It took just eight minutes of Hawthorn’s clash with Richmond for yet another umpire dissent controversy to rear its ugly head as two Hawks players got off scot free despite raising their arms in disgust at a decision.

But luck deserted coach Sam Mitchell’s men just before quarter time when veteran forward Jack Gunston went off with what could be a serious ankle injury.

And there was nothing lucky about a stunning goal from Dustin Martin, who kicked an insane left-foot major that’s being talked about as a goal of the year contender.

Martin electrified the MCG crowd with four minutes left in the final term when he booted a left-foot snap through the posts from an incredibly difficult angle right on the boundary line after grabbing the ball off the ground in heavy traffic.

The AFL’s broken record of an officiating problem struck when Hawks Sam Frost and Will Day both threw their arms up as they angrily disagreed with the umpire’s decision near the boundary line, but no 50-metre penalty was awarded despite the obvious breach of the rules.

It stood in stark contrast to the penalty Jordan De Goey was hit with in Collingwood’s loss to the Western Bulldogs on Friday night, after he fought to bottle up his frustration.

De Goey reactively threw his hands out in frustration, but then quickly drew them back in as he realised that action is now classed as dissent.

‘Come off it. That’s not 50 metres,’ he said in commentary for Seven.

‘You have to pay them all then. It’s just ridiculous.

‘I feel for them at times. This is an emotional game. They are not robots.’

Hawks fans’ hearts sank when Gunston grimaced in agony and grabbed his right ankle after competing for a mark just before the end of the first term.

Jack Gunston (right) looked to have picked up a serious ankle injury just before quarter time. He returned briefly but had to be yanked for good soon after

Dustin Martin came in for some close attention from the Hawks but they couldn’t stop him kicking some crucial goals, including an absolute belter from a near impossible angle

Justin Koschitzke is spoiled by Dylan Grimes. The Hawk kicked two goals in quick succession as his team put on a burst in the second term, but their scoring soon dried up

He was taken off immediately, but returned for a short time in the second quarter before being yanked for good when he couldn’t run freely.

The 218-game veteran had one goal and five disposals before his day came to an end and he was replaced by Connor Macdonald.

Hawthorn put on a great burst in the second term, slotting four goals in a row through two to Luke Breust and Jacob Koschitzke, with one to Chad Wingard.

However, Richmond struck back with a four-goal streak of its own, including a great effort on the run from Dustin Martin, to go into halftime ahead 9.5 (59) to 8.5 (53).

They pulled away from Hawthorn in the third term, kicking four goals to the Hawks’ one to lead by 19 going into the final quarter.

Hawthorn struck back late, booting four straight goals with time running out, before Jason Castagna and Shai Bolton got two back for the Tigers to make the final score 17.15 (117) to 14.10 (94).