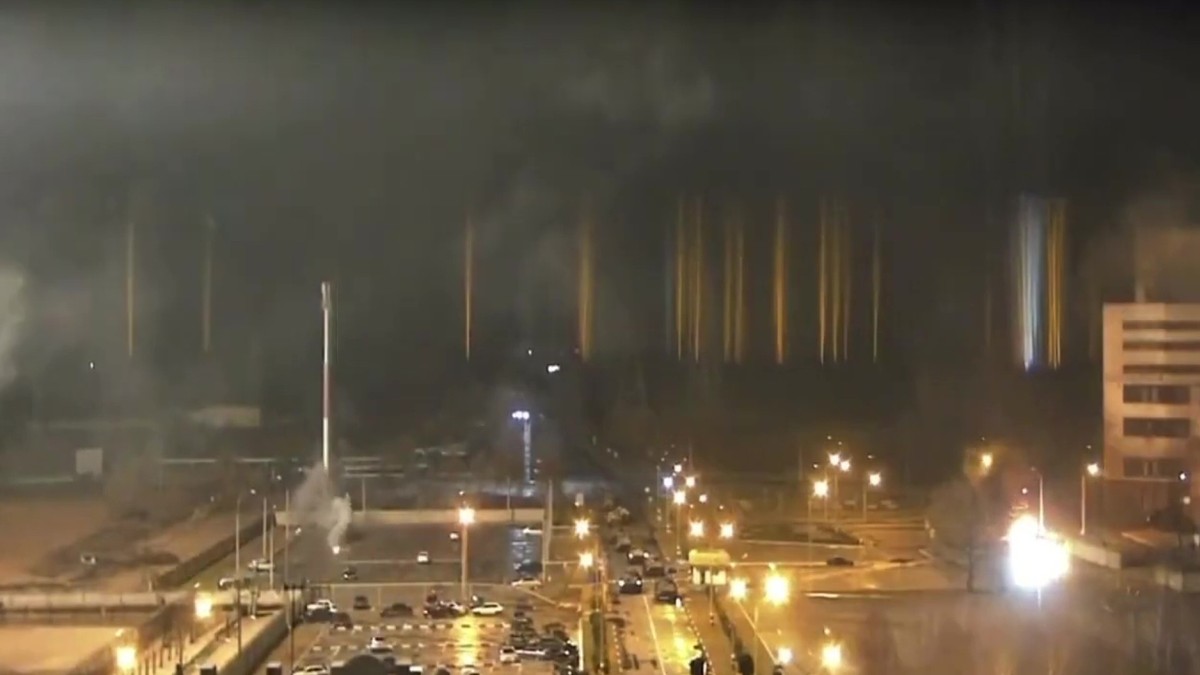 Reports that Russian troops opened fire at Zaporizhzhia, the largest nuclear power station in Ukraine and all of Europe, immediately threw the internet into a panic Friday morning: A black-and-white live stream of the six-reactor nuclear facility showed it in flames, Twitter users were using Google Satellite images to speculate where the fire originated, and Ukrainian Minister of Foreign Affairs Dmytro Kuleba was tweeting with urgency that an explosion would be “10x larger than Chornobyl.”

Within a few hours it was clear that an incident on or above the scale of the 1986 nuclear disaster at Chernobyl hadn’t happened. What caught fire was not a reactor, nor any part of the facility that contained radioactive waste, but an administrative building used for training. The International Atomic Energy Agency (IAEA) was urging Russian troops to cease fire, the facility had yet to see any changes in radiation, and, by midnight on the east coast, the blazes were extinguished entirely.

Even so, international leaders agreed the attacks represented an escalation by Russia—and while Energoatom, the state plant owner, was reporting that fighting had died down, it also noted it had lost contact with the plant’s managers and control over its nuclear material, per Reuters.  The IAEA confirmed this report.

The incident was bad, but it could’ve been potentially disastrous. Why wasn’t it? And what would that have looked like? Motherboard spoke with nuclear physicists to confirm.

Why didn’t the Zaporizhzhia fire turn into a disaster?

Beyond the crucial detail of what was struck—an office building, not a reactor, the part of the plant in which energy is generated—the facility was well-primed to stay safe because, per the state nuclear inspectorate, five of its six reactors were offline.

Let’s start with the basics: Nuclear energy is generated through the splitting of uranium or plutonium atoms in a process called ‘fission.’ This takes place inside the core of a reactor, which sits inside steel containment structures and contains uranium fuel pellets—atom splitting generates thermal energy, which is then used to heat water that is sent into a converter, turned into steam that is sent into a turbine building, where it spins large turbines that generate electricity. That steam is then converted back into liquid water, sent to a cooling tower, where some of it is pumped out into the air and the rest is sent back into the facility. The fuel that is used to split atoms at the beginning of this process is sent into another building, where it sits in large ‘spent fuel pools,’ that look a lot like swimming pools—where it is covered by water and stored for several years. This is where the bulk of radioactive waste in a nuclear facility is housed.

When a reactor is shut down, or taken offline, this process doesn’t happen. The facility doesn’t generate extreme heat or create hot water, which would increase the likelihood of fire or meltdown within the facility.

Because the fuel inside nuclear reactors is so hot, any interruption of its normal operations could affect the cooling towers’ ability to cool the system, leading the temperature within the facility to rise uncontrollably, the components within it to melt, and the release of radioactive fuel—that’s a meltdown, and it would certainly be bad.

A meltdown could take with it the concrete containment structures designed to protect nuclear reactors from events like this one, said Dan Yurman, nuclear energy consultant and publisher of the blog Neutron Bytes, over the phone to Motherboard on Thursday evening. That could lead to the release of nuclear waste.

But, crucially, it would take a lot to break down modern containment structures: “These are concrete structures, they’re a couple of sheets thick, they have a web of steel inside the concrete,” Yurman said. “They’re intended to withstand the impact of a 20 ton airliner.”

Zaporizhzhia has containment structures around all essential parts of the facility: the reactors, cooling systems and spent fuel pools, U.S. Energy Secretary Jennifer Granholm assured Americans in a Tweet Thursday evening that the structures were ‘robust’ and were protecting the reactors from ejecting radioactive material.

What’s more vulnerable in this facility, however, is not the reactor, but the spent fuel pools. The isotopes that are created when atoms split are radioactive, which is what makes nuclear energy potentially dangerous. These isotopes constitute spent fuel and while they’re no longer capable of producing energy, they can remain radioactive for hundreds to thousands of years. If one of the facilities that house the stuff was damaged badly enough, it could release radioactive waste into the atmosphere and nearby soil and waterways. This could also happen in the event of a meltdown: If a facility heats up enough that the water sitting in a spent fuel pool evaporates, the spent fuel could catch on fire, said Cheryl Rofer, Santa Fe-based chemist who worked in environmental cleanup and nuclear weapons disassembly at Los Alamos National Laboratory for 35 years.

A meltdown could also cause a hydrogen explosion, akin to what happened at the Fukushima Nuclear Power Plant in 2011: High temperatures would lead water in a reactor’s steam and in spent fuel pools to split into hydrogen and oxygen atoms. Hydrogen accumulates and causes an explosion that would eject radioactive waste into the surrounding area.

“If the material got out from either a spent fuel fire or hydrogen explosion, probably the biggest effect would be right around the nuclear plant, within tens of kilometers,” Rofer said. “And Russia would be well advised to note that the prevailing winds are towards Russia.”

There’s one more pathway to meltdown, Yurman notes, and that’s grid failure around Zaporizhzhia. Nuclear reactors are powered by electricity coming to them from the grid; even amid ceasefire at the plant, ongoing hostility around the facility could short its power supply, interrupt cooling systems and lead the system to overheat. The facility has backup generators, but those have a finite supply of diesel in them that could eventually run out.

“The worst case scenario, of course, is that the regional grid fails due to hostilities,” Yurman said. “Power is lost at the reactor and it’s not restored in time. And they’re not able to refuel the diesel generators. I mean, that’s a worst case scenario.”

Say the ‘worst case scenario’ occurs. Would this be a second Chernobyl?

No, all experts agreed. Rofer tweeted confidently Thursday evening that this was highly unlikely, in part because the reactors at Chernobyl were not protected by containment structures, as those at Zaporizhzhia are.

But Zaporizhzhia’s reactors are also totally different from the ones at Chernobyl. Chernobyl houses Soviet-era RBMK reactors, which use graphite, a highly flammable form of carbon, to facilitate the fission process. The reactors at Zaporizhzhia are VVER reactors—a safer, more modern design that uses water pressure to facilitate fission, and are thus far less likely to catch fire.

“it’s just a totally different a design of reactor,” Rofer said. “At that time, the RBMKs all had a particular design flaw that everybody knew could lead to something like what happened at Chernobyl.”

“No reactors since the RBMKs have been designed that way, including the VVERs and even the existing RBMKs have since been modified,” she said.

The presence of graphite is what made the fires that broke out at Chernobyl so potent.

“It burns, it’s carbon,” said Bob Rosner, founding director of the Energy Policy Institute at the University of Chicago and member of the science and security board at the Bulletin of Atomic Scientists. “When the containment vessel cracked, the carbon caught fire, and the fire was hot enough it lifted a lot of the radioactive waste up into the atmosphere. And that’s what spread.”

A fire at Zaporizhzhia would be unlikely to spread so rapidly, Rosner said, because, simply, “there’s nothing flammable anywhere in that building.”

“It’s very unlikely that you’d have a fire inside of that building,” he added. “The release of radioactivity will be quite localized.”

What now? What risk remains?

Despite his confidence in the safeguards that Europe’s largest nuclear power plant was designed with, Rosner remains alarmed that conflict escalated to an attack on the facility at all.

“It’s kind of astonishing,” he said. “I was asked a few days ago, ‘would the Russians do this?’ I said, ‘no, it’s ridiculous because they hit one of the nuclear parts, damage is going to spread not just in the Ukraine, closer to them, they’re next door.”

Continued conflict around the reactor could forge down any number of pathways to meltdown, leading to a radioactive disaster. It could also just shut down the entire power plant, a scenario that could see enough energy (5,700 megawatts) to power 400,000 Ukrainian households go offline—some 20 per cent of the country’s electrical output comes from nuclear energy from Zaporizhzhia.

By Friday mid-day, it appeared that control over the facility was in the hands of Russia, and Energoatom, the state utility that owns Zaporizhzhia, warned that any messaging coming out of the plants could reflect this reality.

“There is a high probability that the recent speech of the mayor of Enerhodar was recorded under the barrel of a machine gun,” the company said according to the New York Times.

That could threaten typical safety protocols at the facility, as Ukrainian officials warned was the case at Chernobyl last week. For now, Rofer, Rosner and Yurman are taking solace in the fact that the worst didn’t happen.