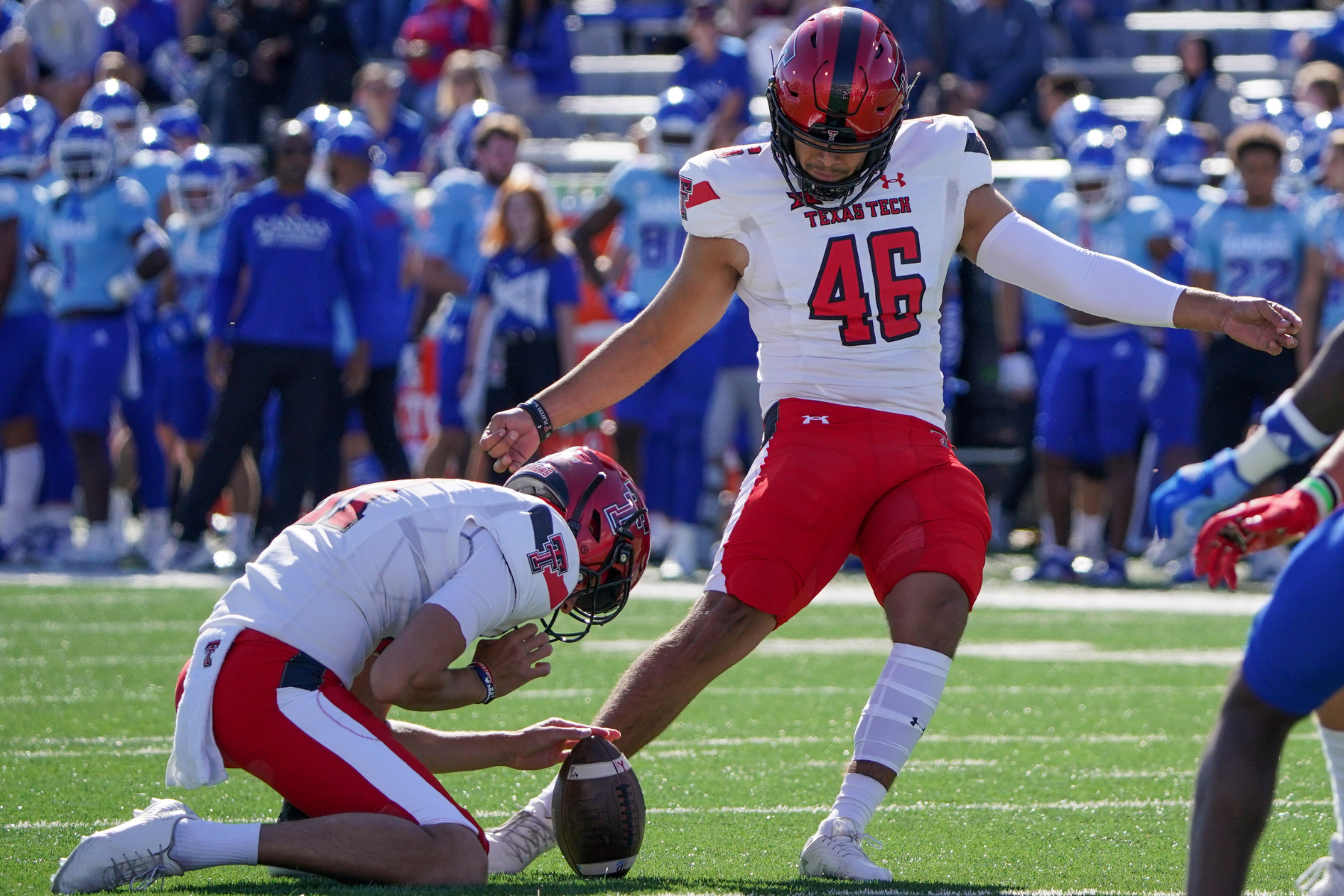 Last week, 90 Dallas Cowboys departed for Oxnard, California, to begin a new season. Each player brings with him a unique story. Dak Prescott’s is a tale of proving the naysayers wrong. Micah Parsons looks to improve on an otherworldly rookie season. Coach Mike McCarthy arrived with a large load of baggage.

Among the most important storylines is a camp battle between an undrafted rookie free agent and a Canadian Football League all-star. Jonathan Garibay, who kicked at Texas Tech, is fighting for a roster spot against Lirim Hajrullahu, who filled in for Greg Zuerlein in 2021 against the Atlanta Falcons. One of those players could be the solution to a problem that has cost this team too many points in recent years.

Zuerlein is now on the East Coast kicking for the New York Jets, his chapter with the Cowboys having closed. But his time in Dallas is worth revisiting. Zuerlein was signed in 2020 for $2.5 million. He was added to the roster for his big leg and to provide stability at a position that had been unreliable since Dan Bailey was cut in 2018. But by the halfway point last season, it was evident that Zuerlein was hurting the team more than he was helping. He missed field goals that put the Cowboys in an early hole. Extra points became an adventure. To understand the value Garibay or Hajrullahu could bring to the team, Zuerlein’s misses need to be analyzed. In doing so, we ask: what would a reliable kicker provide that Zuerlein couldn’t?

The Cowboys don’t need a superstar to improve on special teams. They just need adequacy. So, what does a middle-of-the-road kicker bring to a team? Well, in 2021, NFL kickers on average were successful on 87.5 percent of their field goal attempts, made 62.5 percent from beyond 50 yards, and converted 95.2 percent of their extra points.

Across the board, Zuerlein was below the league average. He was successful on 82.9 percent of his field goal attempts and was 40 percent from beyond 50 yards, and his 88 percent rate on extra points was the second-lowest among kickers who attempted more than 20 PATs. (Inside 50 yards, Zuerlein beat the average by less than a percentage point.) And those missed PATs matter because too often the Cowboys were forced to chase points.

But when you have a kicker like Zuerlein, who was essentially automatic in crunch time, maybe you can live with the occasional miss on extra points and long kicks. In the second half of games last season, Zuerlein’s field goal percentage jumped to 93.8 percent, 90.9 percent in the fourth quarter. He was 87.5 percent during the fourth quarter of one-score games. And in wins, Zuerlein was 11-for-11. It was an unusual way to earn his money, but Zuerlein has made a career out of being an outlier.

Yet while you might remember Zuerlein’s game-winning field goal against the Chargers in Week 2, you might have forgotten that he missed a 31-yarder and an extra point in the opener, a two-point loss to Tampa Bay. (He also missed a 60-yarder at the end of the first half.) And what about Zuerlein’s missed 43-yarder in the first quarter against the Cardinals, a game the Cowboys lost by three? Then there was the second-quarter miss against the Raiders on Thanksgiving Day, although that was from 59 yards. Dallas lost in overtime.

Misses like these were the story of 2021. While Zuerlein came through late in games and with a lead, his field goal rate plummeted to 66.7 percent in situations when the Cowboys were trailing. His percentage in the first half of games was nearly 12 points below the league average. While these misses might not seem as impactful, the missed opportunities put the Cowboys in an early hole.

All told, Zuerlein missed six field goals in one-score games. Four of those misses occurred in losses compared with two misses in wins. An argument can be made that not all of this is on him. The decision to attempt a 60-yard field goal on fourth-and-31 at the end of the first half against the Buccaneers was a Hail Mary. And when the Cowboys were down by 11 to the Raiders, resorting to a 59-yard field goal on fourth-and-7 was head-scratching. But on average, an NFL kicker makes at least one of those field goals 69 percent of the time, and a huge part of Zuerlein’s mystique—and his salary—lay in his reputation for drilling deep kicks, the kind most average kickers (with correspondingly average traits) aren’t asked to attempt as often. And those misses are in addition to the two missed extra points in one-score games.

Let’s assume that Zuerlein was perfectly average, meaning he hit 87.5 percent of his attempts regardless of the situation, distance, or quarter. This implies Zuerlein would have missed more kicks when Dallas held the lead—specifically late in games—but improved in matchups Dallas lost. He would have knocked through 30.6 kicks on the year, slightly higher than his 29 makes. He would have made 3.6 more PATs, too. Add it up, and the Cowboys would have scored 8.5 more points—a number that could have changed the course of the season.

To understand why, we have to dive into when Zuerlein missed those kicks. Remember, he was significantly better in wins, delivering 0.68 points more than a league-average kicker. Which sounds good until you consider that we’re spreading this across a full season. Dallas won 12 games, which means those 0.68 points only amount to .06 per victory. The Cowboys are winning those either way.

The story was different in losses. Dallas’s five defeats were by a combined 32 points. In those matchups, the average kicker would have made 1.7 more PATs and 2.5 more field goals than Zuerlein did. That is an additional 9.2 points left on the table– 1.8 points per game. That adds up for a team that lost three games by a combined eight points.

Not all misses should be treated equally, mind you. Point differential matters. Games in which the final deficit is larger than eight points carry less weight when considering a missed kick. How significant would one missed field goal have been in the 42-point throttling of the Washington Football Team, for instance? In games when the Cowboys lost by multiple scores, the average kicker would have produced 2.6 fewer points than Zuerlein did. Based on his performance in wins, that advantage isn’t enough to move the needle either way. Fewer than three points spread across the season in games where the final deficit was more than seven points probably would not have changed the final outcomes.

The same cannot be said for one-score games. In games decided by a touchdown or less, the average kicker would have scored an additional 11.1 points. Considering the Cowboys were involved in seven one-score games, that’s 1.6 points per game left on the table due to Zuerlein’s early misses. Although the Cowboys didn’t need them, 6.3 of those 11 points would have been scored in wins. That leaves 4.7 points that Dallas missed out on in one-score losses. Remember the three one-score games the Cowboys dropped by a combined eight points? The average kicker might have scored nearly five more points in those matchups.

Practically, this could have had massive implications on the season. Based on those 4.7 points, the Cowboys very well could have gone 14-3 with an average kicker. But using a conservative approach, let’s assume they grab one more victory and finish 13-4. Suddenly, they are in a three-way tie with the Buccaneers and Packers. What would have broken that tie? Divisional records, and the Cowboys would have had the advantage (thanks, NFC East). They would have captured the top seed in the NFC playoffs, and that first-round bye could have changed the trajectory of the playoffs. Maybe it even ends in a parade through downtown Dallas.

There’s a lot in play that’s bigger than Zuerlein, of course. It would be unfair to pretend that the difference between a first-round exit and a deep playoff run comes down to him and him alone. No one can measure the impact of a play that never occurred, either. Maybe Zuerlein drills all the field goals he missed in one-score games and the opponent still finds a way to win. Maybe the momentum of his misses changed the tide in matchups that were shaping up as Cowboy victories.

Still, the upshot is Zuerlein not only failed to live up to his price tag as a difference-making kicker. He couldn’t even manage to be middle of the pack, and even that could have turned some losses into wins.

There is not much room for positive regression for the 2022 Cowboys, especially after an offseason of attrition. But maybe, just maybe, Garibay or Hajrullahu will give this team a boost. Because the winner of arguably the most important battle in camp doesn’t need to be fantastic. He just needs to be fine.