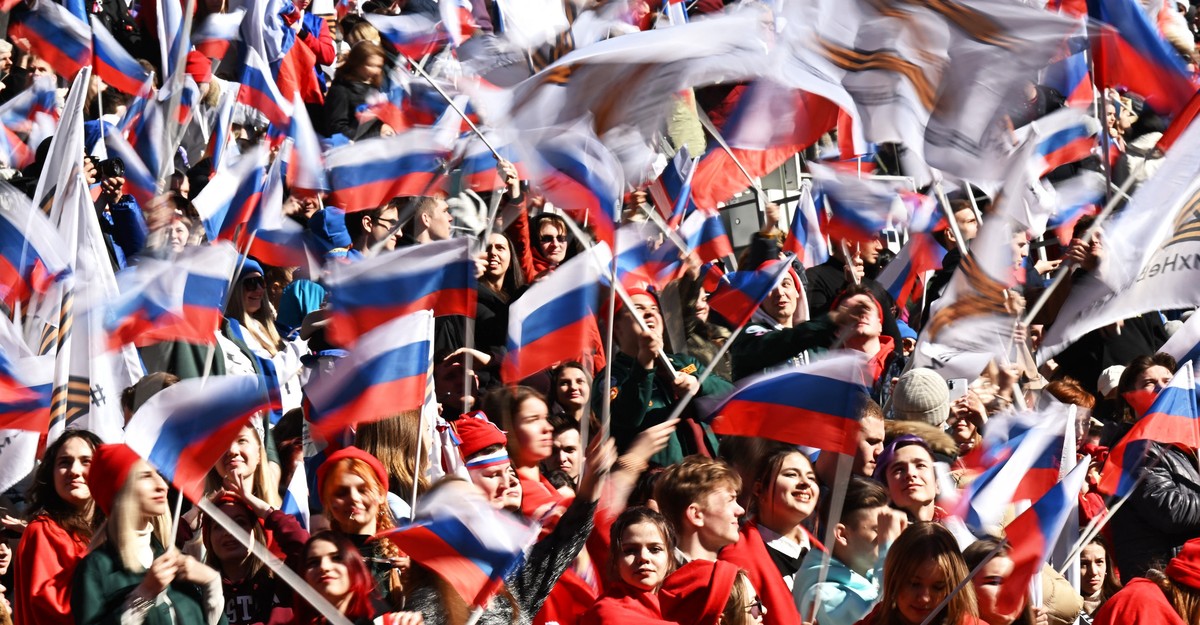 In the early days of the war on Ukraine, tens of thousands of Russians protested an invasion launched in their name. This was encouraging. Americans could content themselves with the possibility that Russian citizens might take matters into their own hands, challenging and weakening their president, Vladimir Putin. In recent weeks, however, such protests have become rare. This is in no small part due to the criminalization of opposition; publicly contesting the Kremlin’s war propaganda carries prison terms of up to 15 years. But fear is only a piece of the story. Russians also appear to be rallying behind their president, raising the question of whether ordinary citizens are partly to blame for their regime—and perhaps even morally culpable.

If Putin’s regime and the Russian people are more intertwined than they initially appeared, a presumption of innocence becomes harder to sustain. According to the Levada Center, the closest thing to an independent pollster in Russia, Putin’s favorability ratings jumped from 69 percent in January to 83 percent in late March, a month into the so-called special military operation. Perhaps more ominously, Russians appear to be informing on one another in growing numbers, condemning friends, neighbors, and colleagues for insufficient support of the war effort. One hard-line member of Parliament noted that a “cleansing” was inevitable. In a speech, Putin himself colorfully praised his fellow Russians’ ability to “distinguish true patriots from scum and traitors and simply spit them out like a fly that accidentally flew into their mouths.”

To be sure, an 83 percent approval rating almost certainly overstates Putin’s support. Individuals may understandably hide their true preferences from pollsters, as a culture of paranoia spreads across the country. In tandem with reports of erstwhile Putin opponents embracing the war, however, we can fairly assume that a large number of Russians, and perhaps a clear majority, are indifferent to the atrocities committed in their name. What, if anything, should we make of this?

Of course, the question of evil—and why ordinary people incline toward it—is an old one, destined to repeat itself with stubborn insistence. As my podcast co-host, Damir Marusic, an Atlantic Council senior fellow, recently wrote, “Putin is a wholly authentic Russian phenomenon, and the imperialist policy he’s pursuing in Ukraine is too.” This is right, but only up to a point. We simply don’t know what individual Russians would choose, want—or become—if they had been socialized in a free, open democracy, rather than a dictatorship where fear is the air one breathes. Like everyone else, they are products of their environment. Authoritarianism corrupts society. Because punishment and reward are made into arbitrary instruments of the state, citizens have little incentive to pool resources, cooperate, or trust others. Survival is paramount, and survival requires putting one’s own interests above everything else, including traditional morality. In such a context, as the historian Timothy Snyder puts it, “life is nasty, brutish, and short; the pleasure of life is that it can be made nastier, more brutish, and shorter for others.” This is the zero-sum mindset that transforms cruelty into virtue.

In short, authoritarianism twists the soul and distorts natural moral intuitions. In so doing, it renders its citizens—or, more precisely, its subjects—less morally culpable. To be fully morally culpable is to be free to choose between right and wrong. But that choice becomes much more difficult under conditions of dictatorship. Not everyone can be courageous and sacrifice life and livelihood to do the right thing.

The invasion of Ukraine was very much Putin’s creation, his idiosyncratic bid to reimagine Russia. It is unlikely that something similar would have happened in his absence. While Russians have now hardened against their Ukrainian neighbors, early reactions to the war tended more toward surprise and even shock. Putin, after all, had repeatedly denied that he was planning to invade. This is why many of the Russian troops deployed to Ukraine did not seem to initially grasp that they were entering a war zone. If a referendum on an invasion of Ukraine had been held months ago, there is little reason to think that Russians would have been particularly enthusiastic. Putin’s war enjoys considerable popular support now, but that’s because it is too late to imagine an alternative. The war is a fait accompli. If Russians wish to continue living in their country and not get on the wrong side of things, acclimating themselves to this new reality is the best option, if not necessarily a moral or brave one.

Shadi Hamid: There are many things worse than American power

Russians may be unique, just like all peoples are, but this does not mean that they are uniquely bad. Or, to put it differently, being good is hard if you live under an authoritarian regime. As the war rages on and anti-Russian sentiment grows, the temptation to see the Russian people as perpetrators rather than victims also grows. But to view them this way obscures something more fundamental: They too are victims, because they have been gradually stripped of their status as free moral agents. This is by design. Authoritarian leaders aim to implicate their own people in their crimes, which in turn allows them to both spread and dilute political responsibility. If responsibility is spread across the population, then so is guilt. To repudiate Putin would mean repudiating themselves.

This is yet another reminder of the elemental distinction between autocracies and democracies that President Joe Biden has highlighted in a series of speeches and other public statements. Americans have no trouble seeing Russia and China primarily as national-security threats and challengers to the United States, in part because they are. But there is a deeper divide—one that cuts to the very core of what it means to be a citizen and even a human being. Dictatorships elevate the nation and the leader as ultimate ends, while mere individuals have no inherent worth outside of their service to the state.

Driven by an inherent logic of force and brutality, authoritarian regimes—particularly those with delusions of imperial grandeur—commit atrocities with indifference and even abandon. And they bring their populations along with them, willingly or unwillingly. This is what makes them doubly dangerous. It is also why the struggle ahead of the United States—and all democratic nations, whether they realize it or not—is likely to be a long one. As systems of government and ways of organizing society, democracies and dictatorships are irreconcilable. In a better world, coexistence might have been possible. But that is no longer the world we live in.