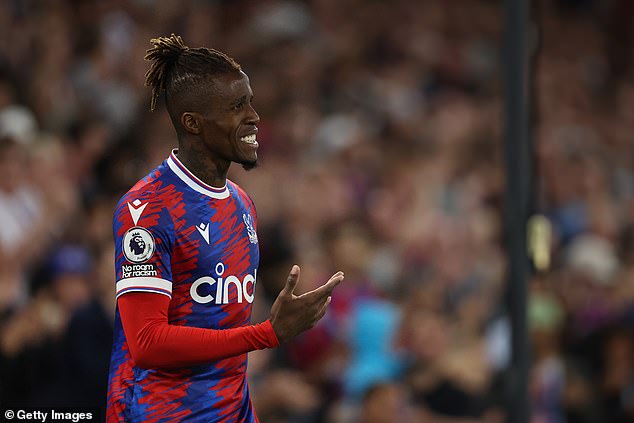 ‘We just killed ourselves in the end’: Wilfried Zaha blasts Crystal Palace’s defensive approach that cost them win against Brentford after Yoane Wissa’s late equaliser – insisting ‘one lapse in concentration ruins all the hard work’

By Henry Tomlinson For Mailonline

Crystal Palace star Wilfried Zaha has slammed his own team’s defensive approach after their draw against Brentford.

The Ivorian gave the Eagles the lead at Selhurst Park through a stunning strike from the edge of the box against the Bees in the 59th minute, but his side could not hold onto the three points as Yoane Wissa netted an 88th-minute equaliser to split the share of the spoils.

In his passionate post-match interview, Zaha did not hold back as he did not understand why the team decided to defend the lead instead of pushing on and trying to score a second goal to wrap up the game.

🗣 “As soon as we went in the lead we just start to defend, I don’t see why we do that”

He told BT Sport: ‘I’m lost for words. Just one lapse in concentration, it ruins all the hard work. We literally just had to keep it tight.

‘It’s like as soon as we went in the lead, we just started to defend. I don’t see why we do that. If we just continue pressing on, I feel like we could’ve got a second and just ended the game. But we just killed ourselves in the end.

‘We knew about their set-pieces and throw-ins, but it’s a thing where you’ve got to get through the first 30-35 minutes and then there is more space in the second half. Then there were more chances created.

‘Our problem right now, which in due time we’ll fix, is just last-minute goals. It throws away the whole performance.

‘Today was not, by far, our best performance. But we should at least leave with all three points.’

The 29-year-old has been linked with a move away from the Eagles this summer as he entered the last year of his contract.

However, Zaha has not been fazed by the speculation and has remained focused on the task at hand with Crystal Palace.

London-based sides Arsenal and Chelsea are reportedly interested in the 29-year-old and could give him one last crack at one of the country’s top sides.

He said: ‘It’s not been difficult at all. I’ve just been focused on Palace in every game. I’ve gone to training and I’ve enjoyed it.

‘We’ve got a massive understanding, everyone understands me. It’s different, it’s like a family here.

‘I’m happy to be scoring goals but the team is all I’m thinking about.

‘It means nothing now we’ve got a draw – back to the drawing board.’