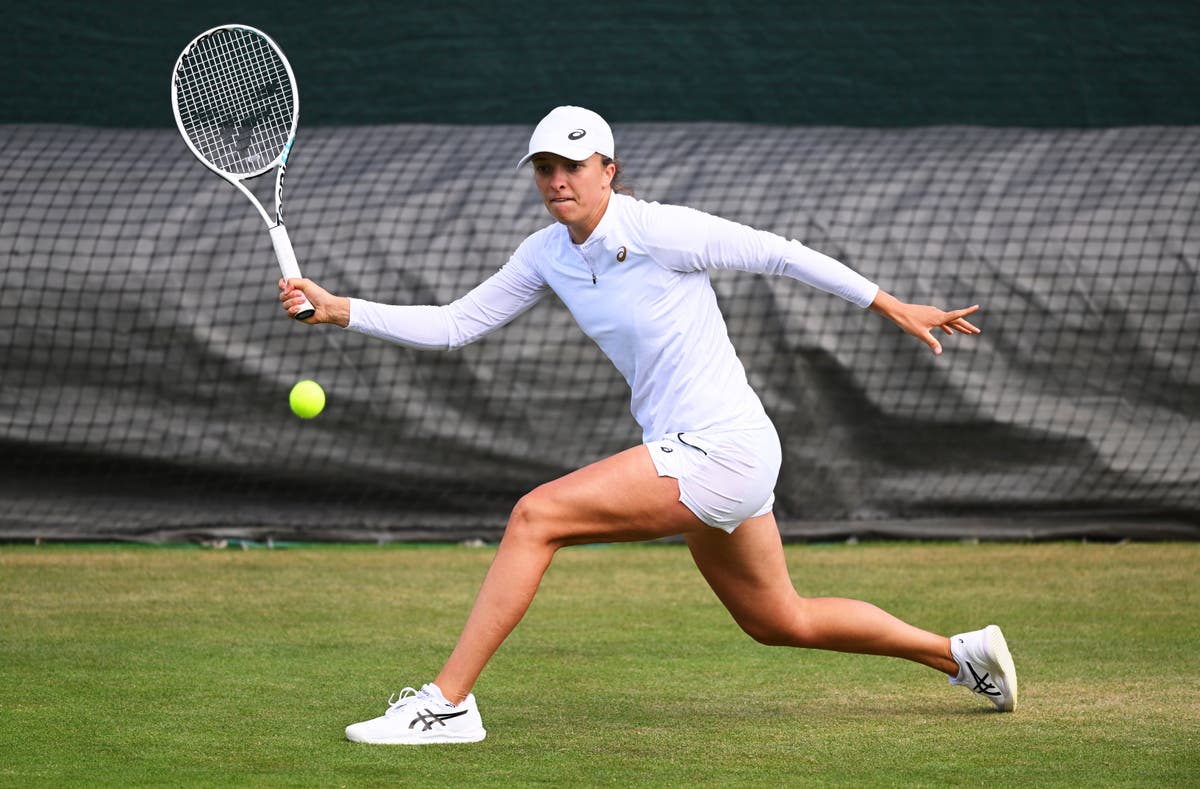 Follow all the action as Wimbledon continues with Rafael Nadal, Iga Swiatek and Serena Williams all in action on day two.

Today marks the return of Nadal, back for the first time since 2019 and fresh from opening up a lead in the race to finish with the most men’s grand slam titles with 22. That’s compared to defending champion Novak Djokovic, who has 20 titles, with the six-time champion up and running after swiftly moving into the second round with a hard-fought four-set win over Soonwoo Kwon. The other finalist from SW19 last year, Matteo Berrettini, is out of the tournament after testing positive for Covid.

The favourite in the women’s singles is World No 1 Iga Swiatek and she opens up her championships on Centre Court against Jana Fett, taking the traditional slot on the first Tuesday of play after defending women’s champion Ash Barty’s sudden retirement. There is more Wimbledon royalty in action on day two with Williams making her long-awaited return. The seven-time Wimbledon champion is back in singles action after cruelly being forced to retire from her first round match at SW19 last year and the 40-year-old, third up on Centre Court, looks to ignite her comeback from a hamstring injury when she takes on Harmony Tan.

Elsewhere there is intriguing matches involving Coco Gauff and Elena-Gabriela Ruse on Court Two, while the charismatic Nick Kyrgios is hoping to cement his status as a dark horse this year with a first-round encounter against Paul Jubb on Court Three. Follow all the action from day two live, including the latest results, reaction and analysis from the All England Club

Iga Swiatek is currently in the biggest purple patch of her career. She has won 35 matches in a row, tying Venus Williams’ Open Era record, and has won six titles this year alone.

Including last month’s French Open to lift the trophy for the second time and win a second major title of her career.

Britain’s Paul Jubb leads Australia’s Nick Kyrgios after taking the first set 6-3 on court three. Kyrgios has a double break on the Brit in the second set though and looks likey to draw level in that match.

American teenager and French Open finalist Coco Gauff is down a break to Elena-Gabriela Ruse of Romania who leads 2-1 in the frst set.

Women’s world no. 1 Iga Swiatek is about to get her Wimbledon campaign started as she’s up first on Centre Court against Jana Fett of Croatia.

Swan dug in and fought to the end of the third set but it’s the world no. 76 who takes the match!

Katie Swan put in a superb performance but fell agonisingly short at the last hurdle.

Kostyuk employs the old serve and volley to take the first point but almost runs into trouble after Swan’s return is fired right at her. Somehow the Ukrainian manages to flick the forehand volley back.

Swan holds! She’s hanging in there but Kostyuk will be serving for the match. Is there one more twist in this match?

There are a few shouts of ‘come on Katie’ from the crowd as Swan faces yet another pressure filled service game.

Kostyuk is one game away from taking the match.

Game on. Kostyuk takes the first point but Swan responds with the next two after errors from the Ukranian.

Kostyuk sends down an accurate serve making Swan stretch to reach it and the Brit can’t get it back.

Swan narrows the gap on Kostyuk again. In both previous sets Swan has stepped up to break when she’s needed to.

The game game is a big one. If Swan can take it, she’ll stay alive in the match.

All the pressure is on Katie Swan. She hasn’t even had an opportunity to get her break back since the second game of the set. Kostyuk’s powerful serves are too good at the minute.

The Ukrainian is closing in on victory.

Peniston through to second round

Great Britain’s Ryan Peniston is through to the second round after defeating Henri Laaksonen 6-4, 6-3, 6-2 in straight sets. It’s a great story for Peniston who beat cancer as a baby and was given a wildcard entry at this year’s championships.

“It’s amazing, I can’t really put it into the words the feeling of being here,” said the 26-year-old before the tournament. “I don’t have much memory of going through cancer… but it was a really tough time for my parents… and I’m just very grateful to be sitting here right now at Wimbledon.”