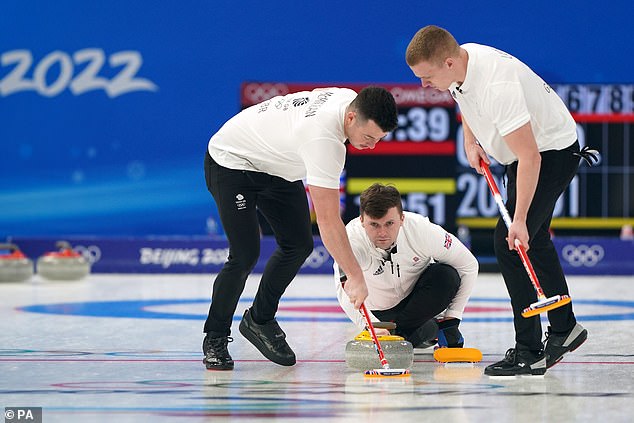 Great Britain’s men’s curling team will play for a place in the Olympic final later on Thursday after brushing aside Canada to finish top of the round-robin standings.

Bruce Mouat’s side claimed a 5-2 win to end an impressive group stage with an 8-1 record – but next up they must meet the United States, the reigning champions and the only team to get the better of them so far. The semi-finals start at 12.05pm GMT.

However, Mouat is in no doubt his side have moved on since their 9-7 loss last Friday, and believes the setback in what was only their second game in the competition will not prove a decisive factor.

Mouat said: ‘We’ve learnt a lot about the ice in the last four or five days. We know what kind of throws we need to make shots.

‘The second game that we had was against the USA, which we did lose, but we’ve learnt so much from that point that I’m really confident we can come out and play better.

‘We will just have to relax into the game and try and not feel the extra pressure that the semi-finals is going to put on and just try and enjoy ourselves, which is when we play our best.’

USA are next up, with the reigning champions the only team to get the better of GB so far

Mouat and his team-mates Hammy McMillan, Bobby Lammie and Grant Hardie, came into the tournament as the world’s No 1-ranked team and runners-up in last year’s World Championship to Sweden.

The Swedes, skipped by veteran Niklas Edin, whom Mouat’s men defeated earlier in the competition, face Canada in the second semi-final.